COPPELL, TX — Steve Kersen of NVision Inc. is pleased that Americans are being moved by the movie “American Sniper,” which tells the story of Navy SEAL Chris Kyle, who, with 160 confirmed kills, is recognized as America’s most successful sniper. Prior to the film, NVision participated in honoring the soldier by assisting in the creation of a life size statue of Kyle.

Kyle, portrayed in the Clint Eastwood-directed movie by actor Bradley Cooper, served four tours of duty in Iraq and received numerous medals and commendations for his combat service before his shooting death at the hands of a fellow veteran in 2013. 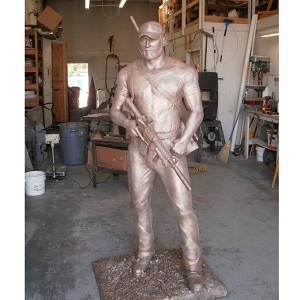 Two years ago, before production on the Eastwood film began, NVision volunteered its 3D laser-scanning services to Sarasota, Fla. sculptor Greg Marra, who was at the time creating a life-size sculpture of Kyle in tribute to Kyle’s service as well as that of all members of the military. As part of the sculpture project, Marra had contacted NVision to help him create an exact replica of the rifle that Kyle used while in the military.

“We were more than happy to volunteer our services to help Mr. Marra create this tribute to a fallen American hero,” said Kersen, NVision’s Vice President of Sales and Marketing.

After Kyle’s widow Taya granted NVision permission to use her husband’s rifle for the project, company technicians went to work scanning the gun and collecting all the essential data on the rifle’s geometry, its precise shape and size — every dimension necessary to create an exact duplicate of the weapon.

The technicians utilized NVision’s own HandHeld 3D laser scanner, which is both accurate and fast — able to obtain dimensions from objects of almost any size and shape while capturing 60,000 measurements per second.

“I can only say that it was an extremely moving experience to be touching and holding the very rifle that had saved so many American lives in Iraq,” said Kersen. “Kyle’s weapon is a valuable personal and historical artifact, and we made sure it was treated with the utmost care while it was in our possession.”

After about two hours of scanning, NVision technicians had captured all the intricate details of the gun’s geometry. A 3D computer model was then created and used to make a replica of the gun to be placed with Marra’s statue of Kyle.

Subsequently, NVision scanned the entire bronze statue so that a digital version of it could be archived and replicated in the future.

“After the scanning was completed, I had the privilege of speaking with Kyle’s widow and she thanked us for our participation in the statue project," Kersen said. "Now, with the immediate success of ‘American Sniper,’ I hope she realizes the appreciation and gratitude this country holds for the services rendered by her late husband and all his fellow service members.”

To see a video on the scanning of Kyle’s rifle, go to www.youtube.com/watch?v=YMTm1aVGawo