Smaller spaces, higher temperatures, a longer service life, increased pressure. Those are just some of the global trends impacting today’s seals whether they are found in vehicle powertrains, windmill motors, tunnel boring equipment or dental drills. In fact, it is imperative that sealing companies understand their materials on a molecular level in order to ensure that their products perform reliably in aggressive environments where heat, pressure and fluids constantly impact component’s performance.

Freudenberg-NOK Sealing Technologies (Freudenberg-NOK) prides itself on understanding more than 1,800 material formulas on behalf of its customers. The company’s Plymouth, MI central laboratory is designed to characterize sealing materials’ resistance to fluid and temperature exposure through a variety of sophisticated testing methodologies and can perform just about any type of thermal analysis, elemental analysis, surface analysis, or state of cure analysis.

Recently, the lab added an infrared attenuated total reflectance (IATR) accessory to it Fourier Transform Infrared (FTIR) spectrometer. According to Fred Fraser, lab manager, the new equipment allows Freudenberg-NOK to analyze more types of materials because it works on any material that absorbs light in the mid-IR range. And, because it uses a germanium crystal, the company can use it to analyze black-filled rubber, a material that Freudenberg-NOK uses a lot in its products.

The IATR accessory has a resolution of 3 µm, and they can analyze materials without removing/isolating particulates from the material's surface. This makes it ideally suited for contaminant analysis.

Recently, Fraser and his team of laboratory analysts were asked to identify suspected contaminants in some polyacrylate rubber samples. The team found an unexpected substance – protein – in the samples they were studying. The protein they detected appeared with some regularity, but they could not plausibly account for its presence.

The team was using FTIR microscopy to help them analyze the samples, but conventional FTIR tends to be ineffective when analyzing complex mixtures. This limitation spurred Fraser and his team to turn to a relatively new but powerful technique—imaging ATR—to improve their analyses.

To use this technique, the lab uses an IATR accessory with their FTIR spectrometer. IATR allows analysts to construct a map of a material surface, as shown in the top portion of Figure 1. The map not only shows how many chemical compounds are on the surface of the material, but also gives information about how the chemicals are arranged. The map will, for example, show whether the chemicals are evenly dispersed or if there are islands of a material within a dominant matrix of some other compound.

This IATR map of a polyacrylate rubber sample gives analysts an idea of how many chemicals are on the surface of a sample and how the chemicals are arranged. 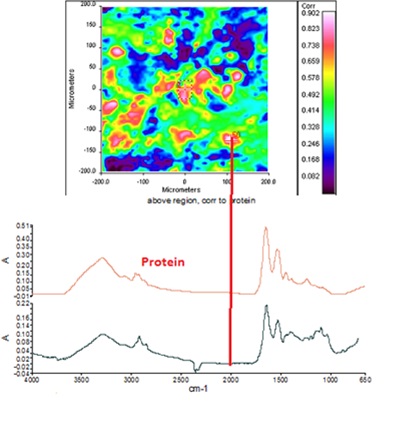 As Fraser and his team created maps of the customer’s samples, they clearly identified several chemical compounds.

The discovery of protein was surprising to the team because Freudenberg-NOK’s process stream does not include any proteins. There are no proteins in either its rubber polymers and rubber chemicals, nor are there any proteins in its metal treatment chemicals.

Despite this, the evidence that the samples contained protein was solid and to make matters more challenging, the protein was appearing with regularity. After some thought and debate, Fraser and his team realized the sensitivity of the IATR was the reason they were finding this unexpected substance in their samples and it's not that the proteins just recently appeared, but that they were probably there all along.

"A big part of what we were seeing in our analysis and results was tied directly to the highly sensitive new equipment we were using,” Fraser said. “As a result, the detection limit went down, and we were seeing substances that we weren't able to see before. We have some of the most advanced analytical capabilities in the industry. But with those advanced capabilities came a few surprises.”

Once they discovered the protein, they were faced with the challenge of figuring out where it came from.

Fraser initially discovered the particles had an unexpected metallic element in them – something often found in face makeup and beauty products. After an exhaustive search looking through the ingredients of beauty products at a local pharmacy, Fraser was no closer to the answer for a very simple reason.

“I found one or two items with the metallic element, as well as a source of protein,” Fraser said. “But these also contained silicone which would have been very easy to spot in our sample analyses and there was no silicone present. By this time we were seeing the protein contamination with some regularity and a stray dab of makeup would not account for this feature.”

After a combination of literature searches and experimental work, Fraser and his team came up with a new hypothesis: the protein they were seeing in the rubber samples was coming from ordinary house dust.

"House dust from homes, offices and human environments, can provide a source of protein, quite apart from the handling of polymers, rubber chemicals, metal treatment chemicals, or process chemicals," Fraser said.

House dust, as it turns out, is a multicomponent mixture. It contains inorganic chemicals, such as silica (sand), clay (aluminum silicate) and calcium carbonate (calcite), as well as organic chemicals, including protein from human skin cells, textile fibers and paper fibers.

All these components absorb infrared light, meaning that they could be found using IATR/FTIR analysis. So, they correlated each of the spectra with the IATR/FTIR structure maps generated from the samples.

As shown in Figure 2, the lab found all seven components in the samples. As a result, they were convinced that the protein was coming from house dust. 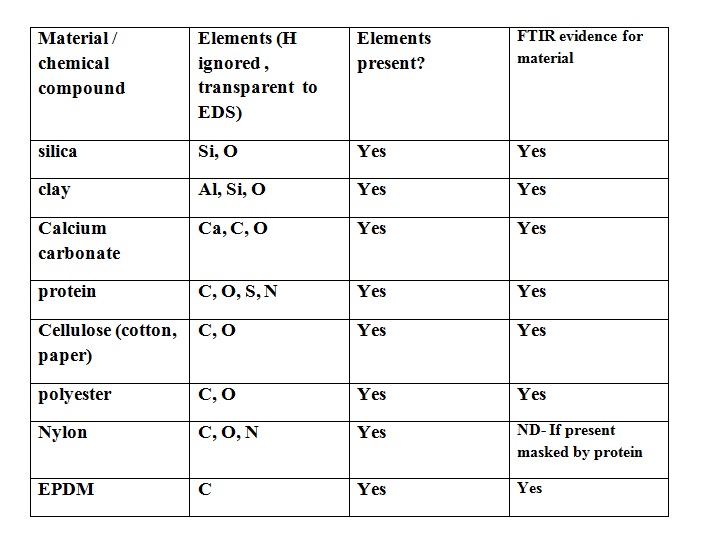 In addition to running analyses for the seven dust components, the lab also ran an analysis with polystyrene. They did this as a negative control to ensure that the procedure will recognize a mismatch. What they found was that even though the correlation value was reasonably high, the spectrum was still a clear mismatch. This shows that this method does not generate false positive matches.

The question now is whether or not the presence of protein means that the rubber samples are contaminated. Dust, and thereby proteins, will be present, unless steps are taken to eliminate it.

According to Fraser, it’s not up to him to decide if the presence of protein constitutes contamination. His opinion, though, is that, except perhaps for clean-room applications, small protein particles should not be considered contamination. To come up with a definitive answer, he notes, the company would have to run an extensive molding trial.

Another question that might be asked is whether or not a lab can be too capable for its own good? New and better equipment is certainly letting labs see things that they were not capable of seeing before. While this new data may challenge the status quo, certainly it's better to have these capabilities than not having them.