A Look at the Cutting Edge

BROOKFIELD, WI — Exact Metrology Co-Founder Dean Solberg is always looking for that next “silver bullet,” he says, to help solve manufacturer’s quality needs. The newest bullet in the company’s arsenal is industrial computed tomography—high-powered x-ray scanners that can measure and analyze both the outside of a part and the inside, discovering mechanical voids, cracks or other imperfections. A popular demo shows a grain of salt, scanned and rendered as large as a softball on the display, with its otherwise imperceptible internal pockets of air highlighted and measured by volume. A tiny grain of salt is an excellent visual demonstration of a CT scanner’s capabilities, but it doesn’t reveal the greatest benefits, namely the ability to inspect the inside of a complex assembly and find flaws, without destroying or altering its construction.

During a tour of Exact Metrology’s Brookfield, WI facility, a twin location to its Cincinnati shop, Solberg and his staff showed Quality the range of cutting-edge tools available to metrologists today, ranging from the microscopic capabilities of the CT scanner, to a recent scan of the inside of a nuclear power plant. Between the two extremes, Solberg also extolled recent scanners from Surphaser that meet in the middle, as well as other technology like its new EnvisionTEC 3D printer.

“You think of the auto industry, in days gone by you had trucks and cars, and now you have these cross-over SUVs,” he explains. “It’s the same way in the metrology business. We had the long-range scanners—which were survey-quality for bridges and big buildings—and you had metrology-grade stuff, and the two never met in the middle. So now Surphaser has one of the unique cross-over scanners. I can use it for survey, but I use it a lot for metrology.” The mid-range scanner has been useful for a metal forging customer which can now measure before they cut the first chip from a 50,000 pound part.

Across the lab from the CT scanner, Operations Manager Greg Groth scans a sample part for an upcoming trade show using a constructed light scanner. In the middle of the room, another engineer measures a part with a mounted, 3D scanning arm. Depending on the request, other options include the long-range scanners, like for the nuclear power plant—or a handheld CMM. Exact finds half of its business in selling the equipment, and the other half as a contract measurement shop, performing high-demand, low-volume work for customers with complex requests.

“We take whatever tool necessary for the job,” Solberg says. “We’re somewhat machinery agnostic, manufacturer agnostic. Because we really need to have the right tool for the customer, and I think that’s the key.”

“That’s what we get to do, it’s kind of fun, we get to steer people in the right direction,” he says. 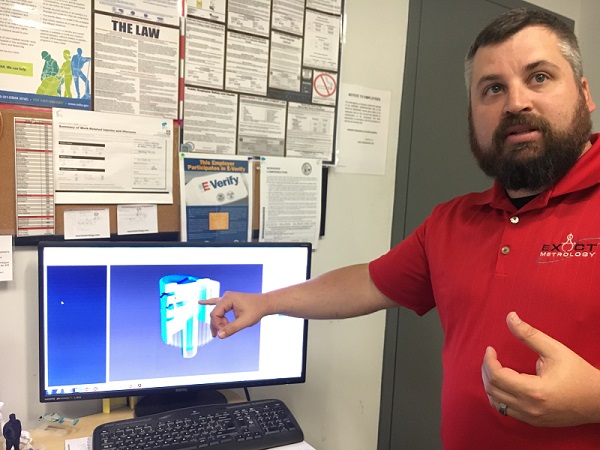 Quality visited half of Exact’s operation during the trip to Wisconsin. The company’s other facility about 400 miles away in Cincinnati, is overseen by president and co-founder Steve Young. The two founders met in the ‘90s when Solberg worked as a manufacturer’s rep and Young was an applications engineer. The two branched off on their own in 1998 to found Exact Metrology, and grew the business significantly in 2007 when it purchased a long-range scanning business in Cincinnati that formed the basis of the current facility there. The business grew again in 2010 with the opening of the Wisconsin office.

One of the few differences between the two locations are the CT scanners. Cincinnati houses the first CT scanner bought by the company in 2014, which was then one of the first industrial-grade CT scanners in America. It is the more powerful of the two, capable of seeing through steel, whereas the newer, smaller CT scanner in Wisconsin can penetrate aluminum.

“Steve and I have continually tried to grow the company centered around technology, and people,” Solberg says. “And the biggest thing that we have as an asset here, and a lot of people say this, that’s ‘it’s their people.’ But, sincerely, you get a guy like Greg or a guy like Matt Martin who runs our Cincinnati office. And those talents are hard to replace. It’s not just the ability to run equipment. it’s about the mindset to think something through.”

Exact Metrology is an ISO 9001:2008 and AS9100 certified company. It is also ITAR compliant and holds a Federal Firearms License.