This website requires certain cookies to work and uses other cookies to help you have the best experience. By visiting this website, certain cookies have already been set, which you may delete and block. By closing this message or continuing to use our site, you agree to the use of cookies. Visit our updated privacy and cookie policy to learn more.
Home » Nondestructive Bond Testing for Aircraft Composites
Industry HeadlinesQuality ExclusivesNDT ExclusivesTest & InspectionNDTAerospace
NDT WEB EXCLUSIVE

Reliable bonds are essential to the integrity of aircraft composite structures throughout their service life. Therefore, nondestructive testing (NDT) methods have been developed to assess bonding quality during maintenance. This article will review several methods recently developed to improve the reliability of inspection.

Because aircraft structures are subjected to impacts and lightning strikes, reliable and efficient NDT methods are needed to quickly assess possible damage. The methods and the necessary instruments have to be easy to use by NDT inspectors all around the world to ensure the consistency of test results during maintenance checks.

Impacts on aircraft structures can cause different types of damage to composite structures. The damage varies depending on the nature of the composite part, its composition, and density. On composite laminated structures, defects created by impacts are mainly delaminations between different plies of the fuselage and wing skin. But impacts can also cause disbonds between the skin and the stiffeners. Such disbonding can significantly diminish the integrity of these laminated structures.

Figure 1: Delamination in a laminated structure 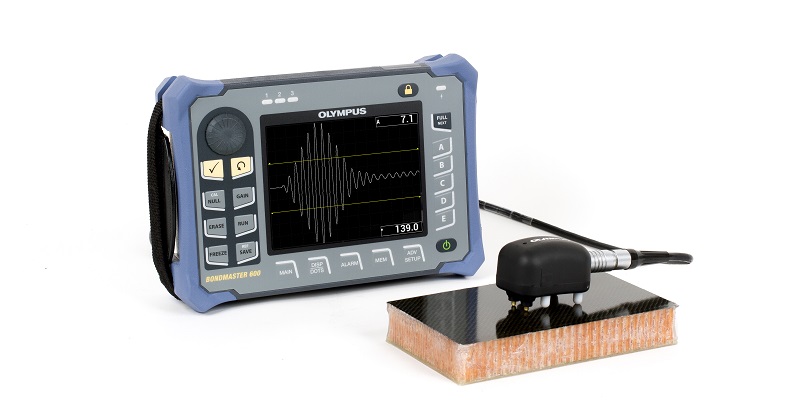 Pitch-catch mode is typically used to inspect composite materials containing honeycomb structures. The transmitter sends acoustic energy into the part, which is then received by the receiver. In a bonded condition, a portion of the acoustic energy is attenuated by the components of the structure. When the probe is placed over a disbonded area, the amount of energy returned to the receiver is greater, resulting in an amplitude change. 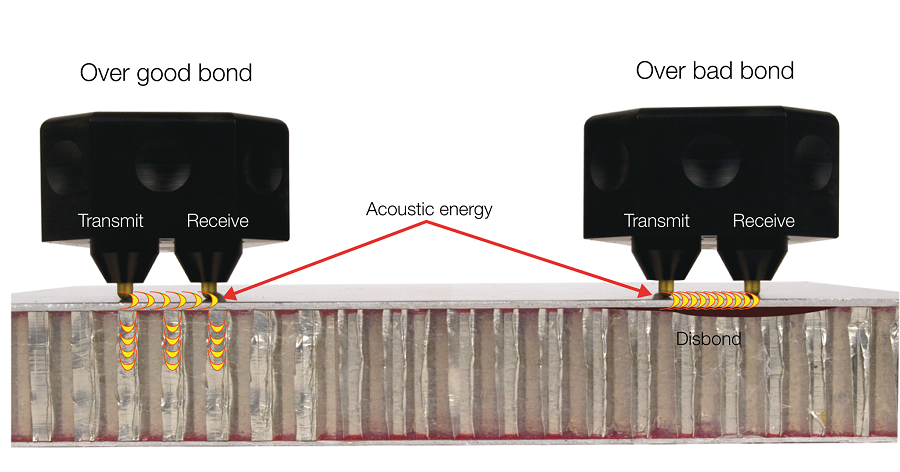 An adaptation of this technique was recently developed to allow reliable detection of a disbond (an area 25 mm × 25 mm [1 in. × 1 in.]) located on the far side of a 40 mm thick honeycomb structure, resembling the type E defect in Figure 2. A new differential high-voltage probe was specifically designed for a difficult and time-consuming inspection of an airplane. This remarkable result is now referenced in commercial airline service bulletins.

In a manufacturing environment, large sandwich panels are inspected with through-transmission methods in which a relatively high-amplitude ultrasound beam travels through the part and a receiving transducer located on the other side measures attenuation of the signal. Results are typically presented as C-scan images. This technique is widely used and is very reliable. However, this technique cannot be used in a maintenance environment as it is impossible to access both sides of the aircraft structure.

A technique was recently developed to detect disbonds between the inner skin and the core. The technique uses a broad bandwidth 1 MHz probe. The probe, when excited by a powerful square wave pulse, creates resonance in the structure underneath it. The instrument's receiver filter is tuned to the thickness of the structure and to work at the corresponding half-wavelength. The presence of a disbond will reduce the stiffness of the structure causing a resonance shift to a longer wavelength, thereby diminishing the resonance frequency. Because of this phenomenon, a 25 mm × 25 mm (1 in. × 1 in.) disbond on the inner structure causes a backwall signal attenuation of 6 to 12 dB.

Ultrasonic phased array, a newer technology, has also undergone recent developments. Portable and easy-to-use units are now available on the market and referenced in maintenance manuals of aircraft manufacturers for various applications, including impact damage detection in composite laminated structures.

For such structures, the linear scan capability is used. The instrument performs a zero-degree linear inspection covering a large area in one pass. Combined with the use of a portable scanner, the system displays results in a C-scan image, which give an intuitive mapping of the structures inspected. The combined use of image and scanner increase the reliability and the speed of the inspection.

While a lot of effort has been put into creating new methods and instrument for NDT technicians, the increasing use of aircraft with composite structures has created the need to quickly check for impact damage at the airport during plane turnaround. As NDT technicians are not available in every airport around the world, instruments have been designed to be used by non-technicians to detect possible delamination due to impact.

Simple, go/no-go ultrasonic instruments exist that can be used for the inspection of the new aircraft and other composite structures. Designed so even personnel untrained in NDT techniques can used them, these instruments can detect subsurface impact damage on solid laminate structures (not honeycomb structures). The concept was developed and then patented by a commercial airline and is based on the well-establish pulse/echo technique. One such instrument is referenced in the B787 Structural Repair Data. 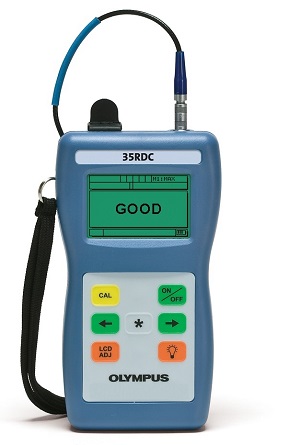