The whole philosophy behind the Fowler FUSION software solution is to make measurement easy. Setting the industry standard in easy-to-use metrology software, FUSION has been crafted by engineers for shop floor operators and metrology. Designed around a graphical interface, FUSION can work in 2D or 3D modes, on all CMMs and is equally at home when used with either touch, scanning or vision systems. It is easy to understand why FUSION has become the software of choice not only for the Fowler line of CMMs, portable CMMs and Vision Systems, but for other manufacturers of the finest measuring devices around the world.

FUSION 3D software is not only way ahead of its competition in being the industry standard for ‘easy-to-use’ software, but also has the depth of functionality to make it the choice for either occasional users or full-time inspection professionals.

As your component is measured, the Fusion software builds a complete representation on the computer display. Once built, the user simply clicks on specific components features to call up the actual dimensions of that feature, exactly as they appear on a drawing

Inspection reports can be in the form of fully dimensioned graphical representations as created on the screen, or tabulated reports in various formats that can show nominals, tolerances, errors, pass/fails, geometric tolerances etc. These reports can also be output as an Excel spreadsheet. These reports allow for first part inspections to happen quickly, on the shop floor, where time is scarce.

Further reports are available to show the form of features (roundness, straightness etc.), hole or point positions, or complete batch results on one report. The user’s company name also appears on all forms of output for inclusion with component shipments. 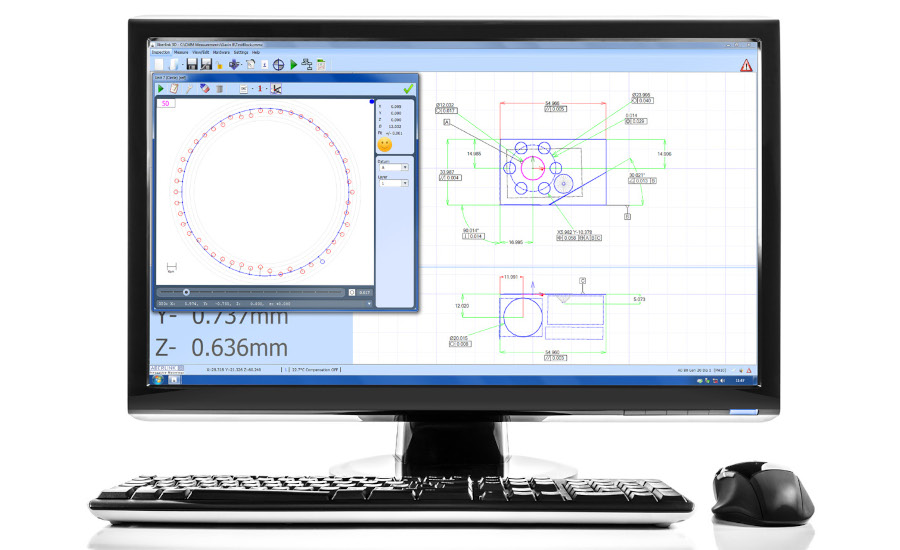 Every time a component is inspected, a program for measuring subsequent components is automatically created. The software also calculates ‘safe’ moves between features, even when the probe is indexing – just another thing that the operator doesn’t have to worry about! These automatically created programs can be modified for maximum efficiency and saved off-line for use later.

Popular throughout the world and available in many languages, FUSION measurement software provides the user with a powerful, yet easy-to-use solution for inspection measurements. This not only increases component throughout but vastly reduces the learning period for new operators or operators running different measuring systems.

Every FUSION license also benefits from, no annual subscription or maintenance fees and free software upgrades for life, for zero cost of ownership.

Welcome to cost-effective precision made easy. 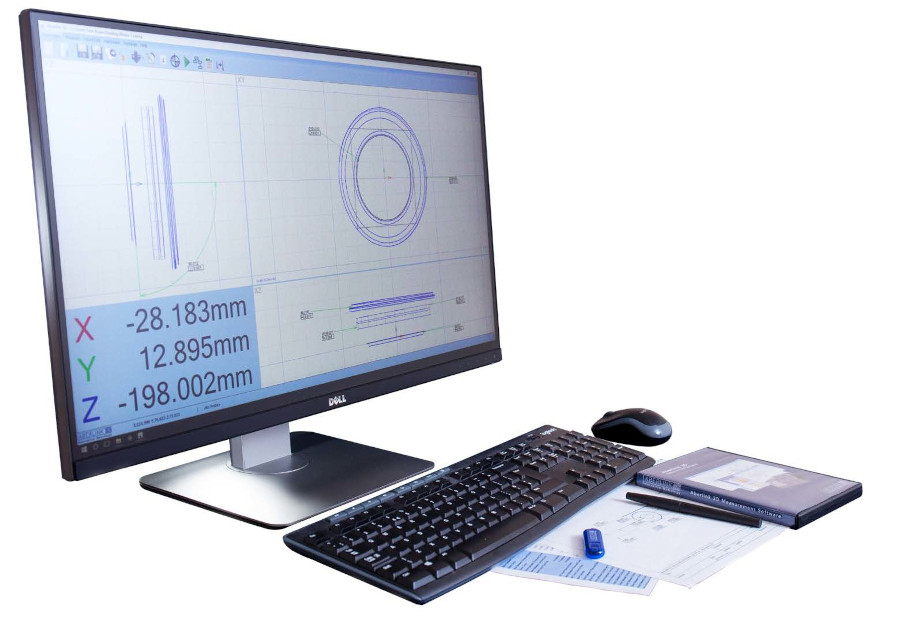 The FUSION CAD Comparison software module enhances FUSION 3D with the capability to compare measured points to a CAD model. Often this will be the only way to measure complex parts, or perhaps sometimes drawings for the component simply don’t exist.


Powerful alignment routines allow measurement points to be best-fitted to the model. Colour coded errors can then be displayed on the model to produce both graphical and tabulated reports that are extremely clear and very easy to understand.


FUSION'S CAD comparison module allows the input of either STEP or IGES files as standard and allows reports to be exported as an Excel spreadsheet. It really does make measuring complex parts easy, whether on a manual or CNC CMM. 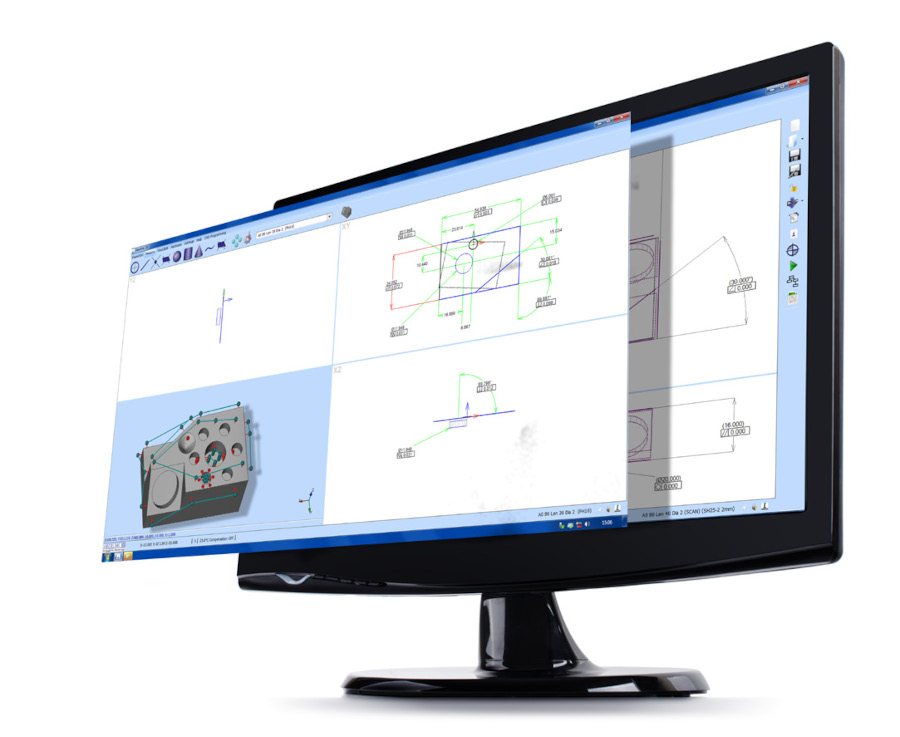 For many years FUSION 3D software has been setting the industry standard for both ease of use and speed of programming. However, until now this has been best done by using the teach-and-repeat method of programming when measuring a component. But what if you want to prepare the measurement programme before you even have the first component? Our CAD programming module allows the simplest programming possible from either an IGES or STEP CAD model.

If you can use FUSION 3D software then you will already know how to use the CAD programming module – it couldn’t be easier. Rather than taking measurement points on a component, you can now just click on the surface of the model where you would like the points to be taken.


Feature Predict works in the same way as when measuring, for instance, if you click in four places on the same plane on the model, then the software will automatically create a Plane Measure unit with those four points in it. Then click on a different feature and it will automatically close the Plane window and look for another feature. If you click on a circular feature it will take just one click to produce a circle or two clicks for a cylinder. Suddenly programming in FUSION 3D just got even easier! 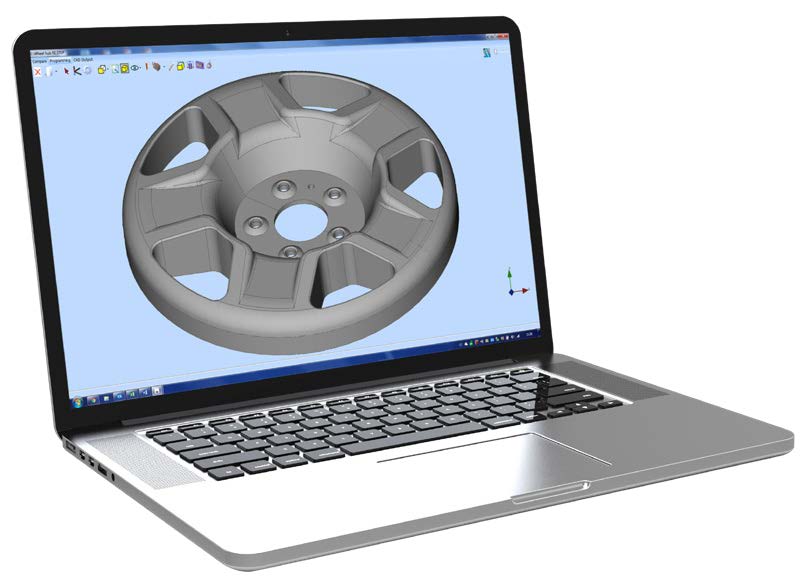 The Programming from CAD module allows programs to be created away from the CMM so the machine is free to measure other parts. You don’t even need a part to create a program - just the model.

Easy Ain't Easy: Taking the difficulty out of making things easy to use.

Making Sure Your Measurement System is Trustworthy

Making Measurement Easy | Written by engineers for engineers, FUSION 3D can work in 2D or 3D, on manual or CNC CMMs and is equally at home when used with either touch, scanning or vision systems.