The Big Trend in Small Cameras

From factories to farms to warehouses and laboratories, small industrial cameras are having a big impact.

Without a doubt, one of the overriding trends in the machine vision camera market today is the emphasis on small cameras. Of course, there are still plenty of vision systems that need so-called “higher end” cameras, including high resolution models, multispectral cameras, prism-based color cameras, high-speed line scan, and more. But by far, the highest volumes of machine vision cameras being sold are those that are small in size and small or small-ish in price.

This demand has resulted in a wide array of compact, affordable cameras being created by many different manufacturers. While they all share many common traits such as sensor sizes, resolutions, interfaces and basic operational feature sets, there are also some key differences across different brands of small cameras which can factor heavily into the plans of vision system designers, depending on the types of systems they are creating.


The Rise Of The Robots

One of the biggest drivers for the continuing miniaturization of machine vision cameras has been the proliferation of robotics, both in terms of configurations and the applications they serve. But fear not, humankind, this is not a takeover. Rather, it is merely the result of several decades of successfully applying automation to increase productivity in a variety of different industries.

Early industrial robots were typically limited to performing predefined tasks on well-known objects whose location was fixed. The success of these systems led manufacturers to look for new, more flexible configurations of robots that could add value in many more ways. The addition of vision subsystems was a key element in expanding the capabilities of industrial robots and has led to a whole range of new vision-guided robot configurations: from collaborative robots (cobots), to pick-and-place systems, to assembly, disassembly, and inspection.

Today, the worldwide vision-guided robotics (VGR) market is valued at over $6 billion annually and is predicted to double by 2026. Whether these are 2D systems or 3D systems, most include at least two small cameras and can have up to four cameras on some systems. 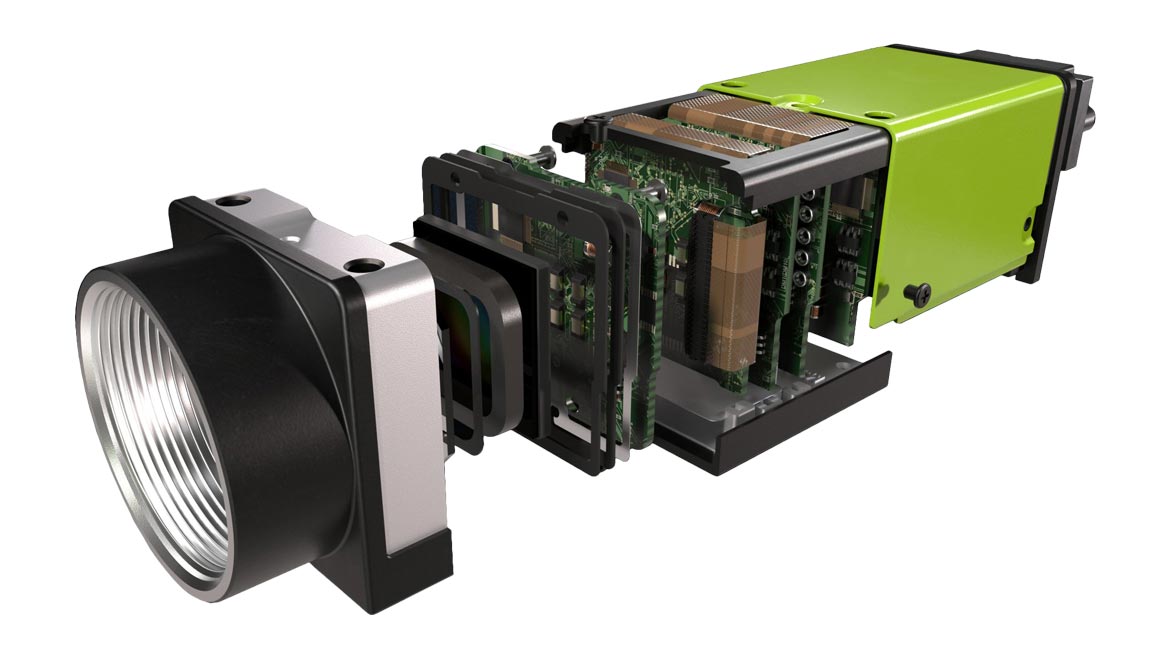 
While small, low-cost cameras help reduce the size and price tag of any VGR system, they are especially critical for systems that employ arm-mounted cameras. The arm-mounted approach provides certain advantages in terms of bringing the camera’s resolution closer to the target, but the cameras used must be small and light enough to not affect the robot’s payload capability. Also critical is the ability to run the camera’s data and power over a single cable such as with a power-over-GigE-vision interface.

Whether using arm-mounted cameras or stationary cameras mounted to the robot’s main structure, most vision system designers agree that the cameras they utilize in their VGR systems must be more than just small and affordable. Because these robots are being deployed in factory environments and often on critical production lines, it is essential that the small cameras being used also offer a strong measure of durability and reliability. For this reason, system designers are learning to ask about shock and vibration ratings, thermal dissipation, and overall field failure rates, in addition to size, weight, and price when evaluating small cameras for their VGR systems.

The competitiveness of this market continues to drive down the cost of these VGR systems, putting even more pressure on camera costs. While many robots rely on global shutter cameras to avoid image distortion caused by the movement of the robot arm or the product being worked on, the lower cost-per-megapixel of rolling shutter cameras has made them attractive choices for stop-and-go type VGR applications, which avoid any spatial distortion problems by making sure that motion is paused during the imaging process. But even in these products, where camera costs are a critical decision factor for design teams, the importance of reliability to total cost-of-ownership is something that successful robot manufacturers must factor into the “true cost” of their vision system. 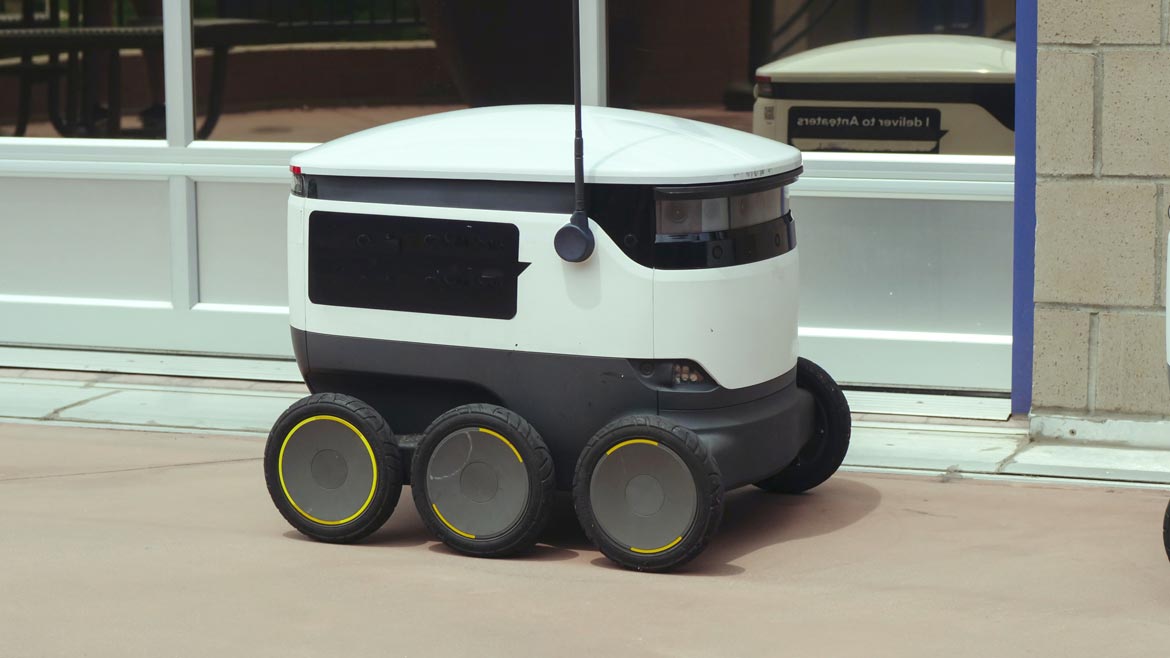 
Robots On The Move

In addition to traditional robotic arms, autonomous mobile robots (AMRs) are gaining in importance. These can be found in factories helping to automate the transport of work-in-process materials between production lines or work cells, or in warehouses assisting with complex tasks related to load and logistical management, or they can be found on a sidewalk delivering groceries or takeout food to waiting customers. Such autonomous robots consist of many different sensing systems designed to perform various tasks.

Over time, small machine vision cameras have become an integral part of these autonomous robots. As these are mobile, battery-powered systems, low weight and low power consumption have become critical camera requirements. The mobile nature of these systems also has led to the increasing use of embedded vision systems, making cameras that support easy integration with ARM processors especially attractive to system designers. 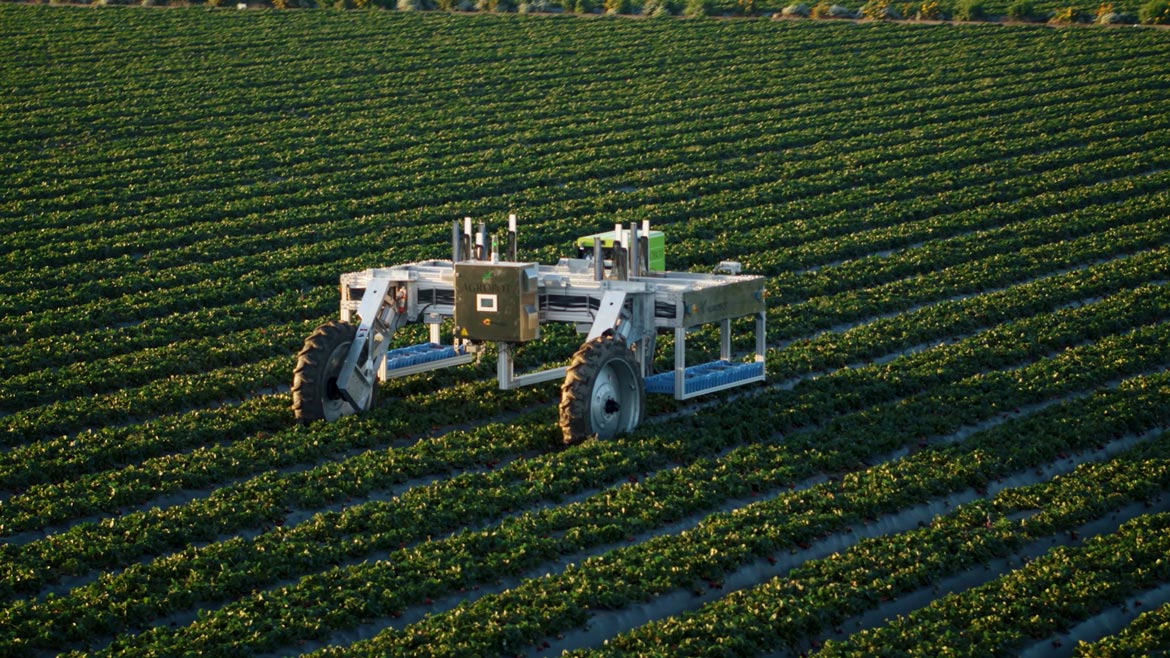 
From The Factory To The Farm

The factory isn’t the only place where small cameras are being called upon to be the eyes of VGR systems. In recent years, increasing numbers of autonomous farming vehicles have emerged. These include vehicles used to identify and remove weeds, all the way up to drones flying over fields to inspect and capture images of a certain topography.

Some of these systems are designed to perform extremely delicate tasks (like strawberry picking) and must be especially nimble – again calling for small, low-cost cameras with good resolution. But here the cameras also must be equipped with sophisticated auto exposure capabilities to handle changing outdoor lighting conditions.

While the robotics industry is considered the biggest driver of the trend towards smaller and more affordable machine vision cameras, it is by no means the only driver. Another good example is in the microscopy market where developers keep looking to develop smaller tabletop systems, and that means incorporating smaller cameras.

This market has added one very big requirement to the typical small, affordable camera and that is its level of dust screening. In microscopy, factors such as the use of telecentric lenses combined with high magnification make any dust particles inside a camera’s optical path much more visible and enlarged. Dust particles that may go completely unnoticed in a typical factory inspection application can have a severe impact on image quality in a high magnification microscopy application.

This is why designers of microscopy systems place a special emphasis on the dust screening procedures used on the small cameras they select. Some camera manufacturers not only have strict quality control procedures but also implement multiple membranes within the camera design to prevent migration of dust particles into the optical path during shipment or operation.

In addition to dust concerns, some microscopy applications also place extreme demands on low-light capabilities. Applications such as fluorescence microscopy require excellent sensitivity. Fortunately, some of the more recent small cameras to hit the market include technology like back-side illuminated CMOS sensors offering exceptional low-light sensitivity. These are typically rolling shutter cameras which would not be recommended for applications involving large amounts of motion, but are perfectly suitable for typical microscopy applications.


The Future Of Small

Small, affordable cameras will continue to play a major role in the evolution of the machine vision market for many years to come. Someday, technological advances may enable truly miniature cameras with embedded systems deeply integrated into robotics and other machine vision platforms. For at least the next few years, however, we can expect a flattening of the curve both in terms of sizes and pricing. This is only natural as price reductions on $300 cameras are less meaningful than price reductions on $3,000 cameras. Similarly, further reductions in camera sizes will be limited somewhat by physical limits on pixel sizes and by the requirements of higher speed interfaces.

Instead of size and price, the focus for the manufacturers of these small cameras will be on building more functionality and reliability into that small price and package. This will include new generations of sensors as well as packing more advanced features and functions into the cameras. Expect to see more features like image compression to maximize throughput, and also more small cameras with capabilities beyond the visible spectrum, including UV, NIR, and even SWIR.

And while some manufacturers will certainly focus solely on making cheaper and cheaper cameras through high volume production, the financial impact of a VGR or AMR breakdown on a key manufacturing line will continue to make reliability and durability of small machine vision cameras a key evaluation metric for most design teams.

Paritosh Prayagi is the director of product management for JAI. For more information, email ppr@jai.com or visit www.jai.com.

Smart Cameras in a Manufacturing Environment: Today and in the Future

Machine Vision Innovations Result in Big Growth in 2021 and Beyond