Kevin Yang is a co-founder of Valkri Intelligence, a researcher in the Stanford Artificial Intelligence Lab with Andrew Ng, and a ZhenFund fellow. William Hang is a co-founder of Valkri Intelligence, and a researcher in the Stanford Artificial Intelligence Lab with Andrew Ng. He is also a ZhenFund fellow. Zihua Liu is a co-founder of Valkri Intelligence, a researcher in the Stanford Artificial Intelligence Lab with Andrew Ng, and a ZhenFund fellow.
Test & Inspection / Industry Headlines / Quality Exclusives

Through the Looking Glass

When we were in the city of Danyang, China, we witnessed a real-life paradox. Danyang is best known for its explosive growth in optical lens manufacturing over the last decade, sprouting hundreds of factories with cleanrooms chock-full of gleaming, automated machinery. There is a lot that goes into manufacturing a lens, and this machinery performs the bulk of it: from lens curing, lens cleaning, to lens coating. As Stanford AI researchers and engineers wildly interested in Chinese manufacturing, we were impressed by this caliber of automation.

But the paradox greeted us as soon as we walked into the rooms responsible for the most critical part of the entire process: quality control. Both before and after lenses enter a series of complex machines, they must be inspected by throngs of female workers whose sole job is to sit at a bench and perform the following:

1. Grab a rack of lenses from a mound of racks piled in the center of the room

2. Grasp each lens by the rim and tilt it against a backlight, while checking for digs, dark spots, scratches, or air bubbles

3. Place passed lenses back into the rack, and move the racks into a staging area for the next step 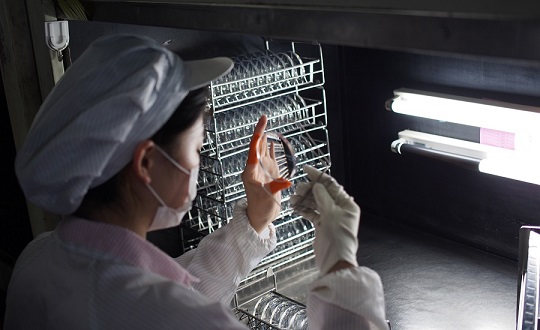 In each of the subsequent optics factories we visited, this process presented itself over and over. Naturally, we asked the factory managers about this process, and received a slew of complaints. We condensed them into five main points:

1. A worker takes five seconds to inspect a single lens, which is too slow.

2. Different lenses have different lens properties and thicknesses, and factory workers must constantly adjust to the change, leading to inaccuracy.

3. Quality control workers get tired of staring at lenses all day and accidentally allow more flawed lenses to pass as the day goes by.

4. Machines to ascertain lens light properties are in wide usage but no machines exist to inspect spectacle lenses for surface flaws and defects. This is a need.

5. Once a flawed lens is introduced into a batch, the entire batch must be inspected all over again to remove flawed lenses. This dramatically increases cost. 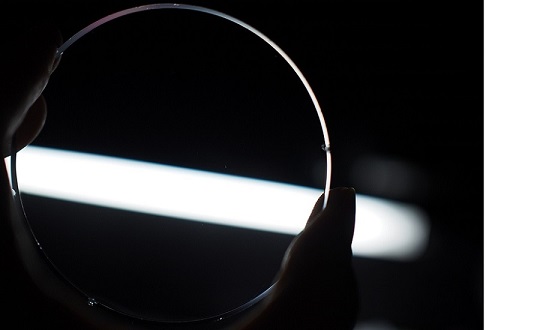 One factory quality control manager claimed that over 40% of customer complaints were due to errors in lens cosmetic defects. Others claimed that the optical lens quality control process is a holy grail for automation because it is so endemic to the entire optics industry.

Quality control was endemic to almost all the factories we visited in other verticals. Beyond optics, we visited countless plastics manufacturers, medical device manufacturers, and automotive parts suppliers all facing very similar problems. Many of these factories automated everything in sight, from injection molding to assembly, with armies of Kuka and Fanuc robotic arms. But quality control continues to present an enormous challenge due to its reliance on human-level visual understanding and adaptation to constantly changing conditions and products. Many factories resort to hiring workers to perform this crucial step.

But human labor in quality control is eroding. A constant concern among factory owners is how difficult it is to hire new workers due to decreased labor supply and the ever-increasing cost of labor in China. According to the U.S. Bureau of Labor Statistics, hourly compensation costs in manufacturing in China nearly tripled from 2002-2009. In fact, one of the biggest types of questions we got from factory bosses was “how can we automate this process?” Where this was a task with high variability, ripe for the application of artificial intelligence.

China is determined to answer this question. In its most recent Five Year Plan, the Communist Party of China firmly encouraged the union of artificial intelligence and manufacturing, and deemed China’s manufacturing future as “Made in China 2025,” where autonomous manufacturing or manufacturing of incredibly mission critical systems would take center stage. Such support would mean pouring billions of dollars into AI research, as well as providing subsidies for factories that embed AI into their operations.

To automate processes that require human level intelligence, we require algorithms and technologies with human-level intelligence. Thankfully, researchers from top institutions and companies have developed a myriad of techniques that can dramatically improve automation.

One such technology that falls under artificial intelligence is computer vision aided by convolutional neural networks (CNNs). CNNs can automatically learn what distinguishes good parts from not good parts on an assembly line with incredible speed. With a good AI product dedicated to quality control, and training images that depict good parts and not good parts, training a CNN can be quite fast. This is an incredible solution for high-mix environments where product environments are constantly changing, and time is valuable. In optics especially, CNNs can quickly respond to varying lens properties and prevent errors and downtime.

In low-mix environments, traditional computer vision technologies can make an enormous difference as well by performing a single task very well and very quickly, albeit with less flexibility. Furthermore, advances in reinforcement learning are also teaching robots to grasp objects properly, and even learn from human actions in simple tasks. This lends itself towards pick and place or general purpose robots of the future that can learn on their own, without having to be constantly reprogrammed for each new product requirement. In optics manufacturing, robots can be trained to perform the difficult task of filling lens molds with polymer, which currently requires experienced and trained workers. We will elaborate on these technologies in a later series of posts.

Valkri Is Tackling This Problem in Optics with AI

After coming back from Danyang, we explored this problem further. Weeks of testing and development revealed that a machine vision system with dark field lighting, with images analyzed by deep learning technology, can unlock the promise of efficient and strikingly accurate quality control in optics manufacturing. We are partnering with Tsinghua University to realize this technology and bring it to reality to optics factories worldwide.

With a solution like ours, optics factories can automatically inspect lenses that either arrive on an assembly line or are placed into the system by a quality control worker. They can ensure that both external and internal defects are detected with incredible precision and speed, with minimal human interference or error. This can allow production speed to escape the limitations imposed by the human eye, and enable a smooth supply chain on the brand and distributor side.

Valkri is harnessing artificial intelligence to solve the paradox we saw in manufacturing. For more information, visit valkri.co.

*Note: Valkri Intelligence is not affiliated with Stanford University.

Initial You got a awesome blog .I determination...

Awesome dispatch! I am indeed getting apt to...

I encourage you to read this text it...

Kevin Yang is a co-founder of Valkri Intelligence, a researcher in the Stanford Artificial Intelligence Lab with Andrew Ng, and a ZhenFund fellow.

William Hang is a co-founder of Valkri Intelligence, and a researcher in the Stanford Artificial Intelligence Lab with Andrew Ng. He is also a ZhenFund fellow.

Zihua Liu is a co-founder of Valkri Intelligence, a researcher in the Stanford Artificial Intelligence Lab with Andrew Ng, and a ZhenFund fellow.
You must login or register in order to post a comment.

This webinar will provide applications where machine learning has been most successful as well as implementation examples in robotics, machine vision, predictive maintenance, and plant floor data analytic.