Manufacturing is a driving force in developing and expanding the digital technologies shaping our world. Artificial intelligence (AI), machine learning (ML), and leveraging the benefits of the Internet of Things (IoT) are creating smart factories, advancing logistics and supply chains, and enabling new business models. Leading manufacturers recognize that advanced intelligence, accuracy, and analytics can come together to create systems and factories that are more context-aware, autonomous, and competitive. Frost & Sullivan research indicates that AI is going to be the leading factor behind improving operational productivity over the next two to four years.

Along with digital solutions, manufacturing technologies are improving at an astounding rate. For example, Frost & Sullivan estimates the robotics market will be a $12.2 billion market by 2025.


When  enhanced by data analytics and integrated with advanced metrology, this market will undergo several transformations, including:


These solutions will improve the critical metric sought by manufacturers—process optimization— leading to more efficient and accurate plants with higher production numbers, higher quality and, ultimately, a better bottom line.

Metrology has traditionally been a tool for quality control (QC) and inspection roles within manufacturing. However, as the sector races to modernize, leading manufacturers are finding they can leverage advanced metrology upstream into the factory's build and assembly functions. New metrology solutions use 3D scanning that generates almost infinitely more data points than traditional, manually based methods. One of the most apparent benefits of using advanced metrology in the build phase is to enable quality checks that are more frequent and accurate, thereby finding faults and making improvements more efficiently than when such reviews are relegated to the final product inspection.

There are additional benefits beyond the immediate quality improvements that advanced metrology can bring to manufacturing. Laser-based metrology can benefit a situation where several products look similar but are not identical; advanced laser metrology can automatically differentiate among the versions to ensure the correct design and fit. For example, Chassisworks, a major supplier of automotive aftermarket chassis and suspension parts, upgraded to a FARO® ScanArm with a Laser Line Probe because it could detect minute differences in original equipment manufacturer (OEM) parts from one year to the next. These changes are subtle enough to evade the notice of a human observer but are essential when trying to match a given vehicle's year, make, and model. Ensuring the replacement’s perfect fit is critical for safety, operation, and sometimes aesthetics. In the near future, this level of detail will be available in near-real-time, helping both discrete and high-volume manufacturing. 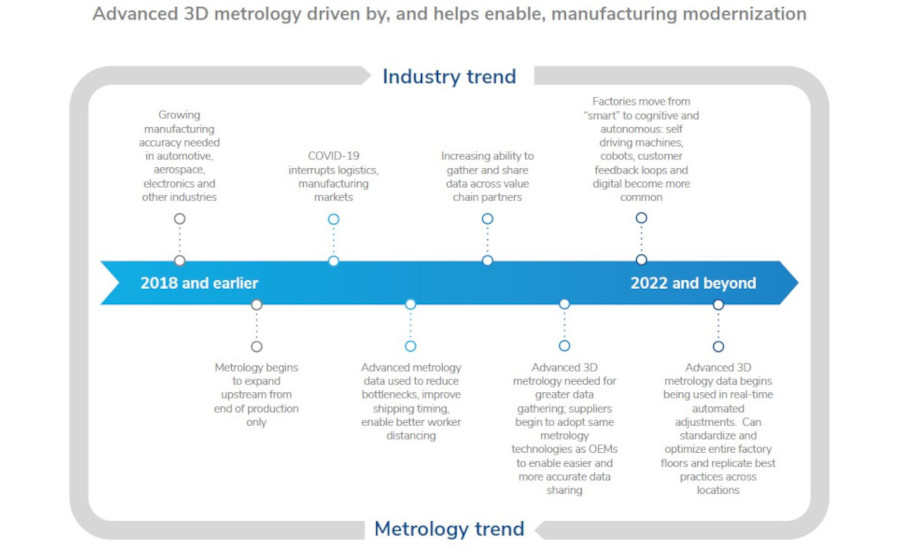 World-leading aerospace manufacturer Airbus is among the most modern manufacturers in the world. The company is well known for building highly sophisticated, safe, and efficient airplanes for commercial and military aviation markets.

Always looking to be at the forefront of manufacturing while still meeting cost and productivity goals, Airbus turned to FARO to improve assembly accuracy for the fuselages on its top aircraft models. The company wanted to shift some of the inspection time, cost, and work to the operations team. However, it had to ensure such measures would improve the quality of its product without compromising the integrity of its processes. FARO provided Airbus with an operator-driven Laser Tracker system that combined precise, laser-based measurements and advanced data analytics, reducing the need for a separate metrology expert. FARO’s solution lowered inspection times by up to 80% by integrating a modern metrology solution into an existing manufacturing process.

Gulfstream, a luxury aircraft leader, also worked with FARO to advance its digital transformation journey. FARO provided a combination of hardware and software for digital models that replaced Gulfstream's legacy physical tooling. This resulted in numerous benefits, such as automated riveting, reducing the storage costs associated with physical (as opposed to digital) masters, enabling QC through better metrology, and even improving the efficiency between engineering and manufacturing.

As Airbus, Gulfstream, and other advanced manufacturers continue to digitize, suppliers such as FARO can provide hardware and software solutions that optimize existing processes and help future-proof digital investments for continued enhancements.

Manufacturing constantly seeks optimization. It has successfully driven and incorporated digital transformation because robust, lasting improvements have a tangible and swift effect on the bottom line. It is arguably easier to calculate the ROI on changes that result in faster production, less waste material, or fewer mistakes than on more subtle improvements such as overall product quality or better design.

Advanced metrology is a natural fit for the assembly environment because it can result in short-term and longer-term, bottom-line improvements. In the short term, improvements include those mentioned above: accuracy, reduction in faults and resulting bottlenecks, higher customer satisfaction, and fewer errors across the process in general.

Longer term, the outcomes gained from data and analytics of advanced, laser-based 3D metrology can improve the entire build process. Parts can be cut, fit, and assembled with much greater precision, reducing waste and material costs, for example. Supplier agreements and logistics also can be amended to fit the manufacturing process more closely in terms of time and materials. In high-value, high-precision industries such as automotive and aerospace, OEMs already require suppliers to provide detailed inspection reports, often before the part even leaves the supplier's facility. OEM requirements are compelling—and, in some cases, mandating—tier-one suppliers and others in the value chain to use the same advanced metrology technologies as the OEMs. This ensures a high level of precision is achieved, the reporting of the parts' condition is accurate, and data sharing is simplified by using the same software.

Benefits of advanced 3D metrology can be felt across the manufacturing organization with short- and long-term advances, such as:


Another organizational benefit to advanced metrology in manufacturing is that the same solutions can improve QC and design functions. As QC and design are often considered cost centers, it can be more challenging to make an ROI case for capital expenditure to improve processes than for a business's manufacturing side. However, as noted in the other papers in this Frost & Sullivan series, advanced metrology provides fundamental benefits to design and QC as well. An organization that takes a holistic approach to apply these improvements across the business, even if the ROI is driven by manufacturing, will reap significant rewards in optimization, profitability, and overall competitiveness. 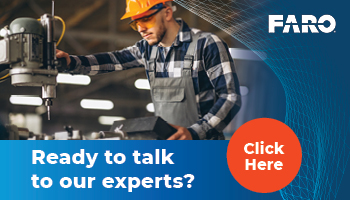