Keep Pace With the Smart Factories of Tomorrow

Are CMM vendors ready for changing dynamics of end users? 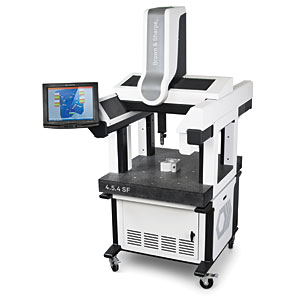 The so-called traditional industrial economies such as the U.S., Germany, France, Italy and the UK are facing decline in terms of manufacturing owing to cheaper labor available in the East. Lastly, economies such as India, China, Brazil, and other South Asian countries are adding to overall complexity in reviving manufacturing in developed economies, owing to cheaper labor, a growing middle class and supportive reforms for foreign direct investments. Developed countries are trying to revive manufacturing by pushing the concept of smart factories and the East is also increasingly investing to increase manufacturing efficiencies. These varying factors have significant impact on technologies such as coordinate measuring machines (CMMs) used in the quality-process.

Frost & Sullivan’s research indicates that stand-alone CMMs generated revenue more than $1.7 billion in 2013. Bridge-type CMMs contribute more than 60 percent of CMM revenue. They are used for powertrain applications inspecting landing gear, actuated assembly, breaking system thrust reverser components and other critical components in the automotive and aerospace industries.  This segment has the highest market concentration with leading companies such as Carl Zeiss, Hexagon Metrology, Mitutoyo and Wenzel being the most recognizable brands. However, niche market opportunities exist for large bridge-type CMMs that measure turbine blades in the aerospace market. Globally, Hexagon Metrology and Coord3 are the only two companies that manufacture two-meter wide and 6 x 7-meter long bridge-type machines.

Articulated arms, such as the FaroArm from FARO Technologies or Romer, a Hexagon Metrology company, are basically portable CMMs that can be easily moved around a plant for performing precise 3-D measurement. The articulated arms product segment was one of the areas of fastest growth in the global dimensional metrology market with growth rates in excess of 6% in 2013. While it may be unlikely to make CMM-level measurements with articulated arm machines in certain application areas, significant penetration has been witnessed in automotive and aerospace since its mainstream introduction in the 1980s.

So far, the CMM market has witnessed three progressive revolutions that have improved quality-process efficiency. The first generation of CMMs was a standalone product. In this stage, end users still had to transport the manufactured components to a measurement room to carry out dimensional measurements using.

This was done primarily because CMMs could not exhibit accurate results in thermally unstable environments. Even today, stand-alone CMMs continue to generate more than 70% of total CMM market revenue. With the increased role of globalization, carrying out the manufacturing and inspection process with the existing capability is extremely critical to keep costs low. A set-up of separate measuring rooms with CMMs consumes tremendous amounts of time and effort, requiring workers to move components to the measuring room and then carry out inspection. In order to address this challenge CMM manufacturers came up with new breed of CMMs.

The second revolution saw the advent of CMMs precisely designed to tolerate harsh factory environments and continue producing high-precision CMM results. Such CMMs are called shop-floor CMMs or near-line CMMs. Carl Zeiss and Hexagon Metrology continue to dominate in shop-floor CMM with Duramax and 4.5.4 SF respectively. For example, Hexagon Metrology’s 4.5.4 F CMM measuring range is 355 x 514 x 353 mm with a superior probing error of MPEE of 3.1 + (3L/1000) microns at an ambient temperature (ISO 10360).  Similarly Duramax’s measuring range is 500 x 500 x 500 mm and has a capability of temperature stability up to +30ºC. Duramax is also integrated with a ZEISS VAST XXT scanning sensor which increases accuracy and measurement speed.

While it is fascinating to note that the tenure of each revolution has been shrinking, it is more essential for CMM manufacturers to acknowledge the fact that each new revolution is expected to last much less time than the previous. This has already been witnessed by most shop-floor CMM manufacturers. Ever since shop-floor CMMs gained popularity among end users, the next logical opportunity for CMM manufacturers has been to automate the systems. Once CNC milling machines were automated, end users were on the lookout for solutions to automate their CMMs to measure the parts. Companies such as Hexagon Metrology, Carl Zeiss, Mitutoyo, Wenzel, Coord3, Wenzel, Aberlink and Helmel addressed these unmet needs of customers by launching shop-floor CMMs. These machines also have competence of automation. The automation feedback loop is being created with the CNC milling machine to adjust tolerances in real time based on data transmitted between the CMM and the milling machine.

The present revolution saw the emergence of automated solutions (in-line) to result in a highly productive environment. The world of smart factories is a key driver for this trend and only a handful of CMM manufacturers have strategically positioned themselves to adapt to the changing dynamics of end users. Inline CMMs are highly automated systems that are designed to be integrated with an automated production line. These systems must provide high-speed inspection of the manufactured parts. Examples of these solutions are Itaca Metrology’s Flexgauge, Mitutoyo’s Mach V and Ko-ga-me, Helmel’s Cellmaster, Carl Zeiss’ scanning CMMs such as CenterMax, GageMax, O-inspect and VoluMax representing in-line structural measurements (CMM with CT sensor).

Traditional boundaries are rapidly fading due to significant global industry convergence and the transformation that may develop up in the course of the smart factories revolution. CMM manufacturers will need to rethink and invest significantly in R&D capabilities in order to sustain in this rapidly evolving market. Traditional CMM manufacturers that fail to do so will struggle to retain prominence. Surprisingly, industrial automation companies and system integrators will make their existence felt in smart factories and emerge as new market leaders. However, strategic alliances are likely to allow traditional CMM manufacturers to sustain and possibly deliver cradle-to-grave solutions.

Offering products and solutions and becoming an integral part of a larger ecosystem is a utopian vision for several CMM manufacturers. For example, a CMM manufacturer can establish a strategic alliance with an automation company to sell more in-line CMMs. Alternatively, a CMM manufacturer can build relationships with other metrology companies to deliver integrated in-line metrology solutions including technologies such as in-line gauging, scanners, vision measuring machines along with CMMs.

By analyzing these three revolutions (stand-alone, near-line and in-line) within the CMM market, it is evident that CMM manufacturers have embraced the evolving concept of smart factories within the framework of their R&D, product design and marketing strategies. Historical trends and end user behavior in the CMM market indicate that stand-alone CMMs are likely to generate maximum revenue. That said, CMM cannot ignore the rapid transformation taking place at end user manufacturing facilities. The role of smart factories is likely to have a profound impact on dimensional metrology products and solutions. End users are likely to adopt a more holistic approach toward building quality inspection processes.

Aravind Govindan is a Senior Research Analyst within Frost & Sullivan’s Test & Measurement research group. Frost & Sullivan, the Growth Partnership Company, works in collaboration with clients to leverage visionary innovation that addresses the global challenges and related growth opportunities that will make or break today’s market participants. For more information on Frost & Sullivan’s Test & Measurement research or any questions on this article, you can contact Jeannette Garcia, Corporate Communications at Jeannette.Garcia@frost.com or 210.477.8427.