Based in Tokyo, Takeda Pharmaceutical Company Ltd. is a patient-focused, values-based, R&D-driven global biopharmaceutical company committed to bringing "Better Health and a Brighter Future" to people worldwide. Their passion and pursuit of potentially life-changing treatments for patients are deeply rooted in over 230 years of distinguished history in Japan.

Philippe Noquéro is a Europe Six Sigma Leader and a certified Master Black Belt (MBB) who is responsible for the Six Sigma capability across the Takeda network in Europe as part of the overall AGILE 4.0 program in place.

Takeda has had a longstanding relationship with Minitab and has used analysis to solve manufacturing issues, identify and execute on improvement opportunities, and design appropriate experiments to achieve process improvements with minimal supervision, among other things.

The three drugs are also called "recombinant treatment," which means they are produced without the addition of human or animal derivatives. The drugs are derived from biotechnological production, using cell culture. As such, pharmaceutical products offer an extremely high degree of safety, purity, and efficacy.

Takeda wanted produce more of these drugs more efficiently, so it wanted to find a way to increase yield from the cell cultures used during the production process. To achieve this, the researchers needed to understand what process parameters affect cell culture performance.

Philippe's team tracked multiple batches and collected data on nearly 30 process parameters that can affect cell culture performance for the essential blood clotting protein. Philippe used many statistical tools during his exploratory analysis, including feature engineering techniques to prepare the data for analysis. The team found that Partial Least Squares was able to identify the critical factors that affect yield. Partial Least Squares Regression describes the relationship between many predictors and one or more continuous responses. It is particularly useful when predictors are highly collinear, or when you have more predictors than observations.

The team identified a few key process parameters using this method, visible in the standardized coefficients visualization, which indicate the importance of each predictor in the model. 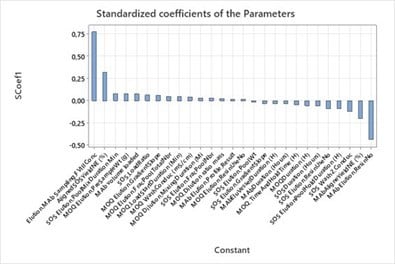 Phillipe knew that he would be sharing these results with other team members and colleagues in other areas.  Because Partial Least Squares regression is a somewhat advanced technique, it might be difficult for everyone to understand and use on their own.  Takeda scientists and engineers are trained and empowered to analyze data themselves using Minitab Statistical Software.  Phillipe decided to evaluate how a CART decision tree could complement the Partial Least Squares regression analysis.  The benefits of this approach were two-fold: CART trees could confirm the results of the PLS analysis and are generally easier for people to use and to understand.

One beneficial output of a CART tree is a Relative Variable Importance plot. The variable with the highest improvement score is set as the most important variable, and the other variables are ranked accordingly. The results were in line with the Partial Least Squares approach and generated interesting discussions about the yield process. CART also provides the single decision tree, another intuitive visualization (not shown). 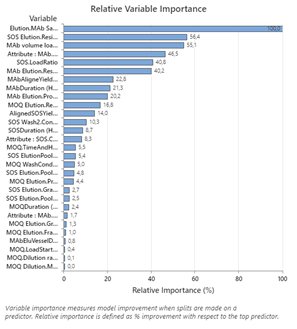 Using multiple machine learning models, researchers learned more about the yield process and were able to identify critical parameters. The CART decision tree results aligned with the results of the Partial Least Squares regression. CART decision trees can be used by more scientists and engineers because they are generally easier to use and interpret. This helps speed up the understanding of results and their interpretation by Minitab users at Takeda. While new compared to traditional modeling techniques, they are intuitive and a complement to the statistical tools the engineers and scientists already know.

As a next step, Philippe and his team plan to incorporate advanced decision trees such as Random Forests and Gradient Boosted Trees (TreeNet®) modeling techniques, using Minitab Statistical Software with the objective of improving the accuracy of the model.

Learn more about Minitab Predictive Analytics. This module can effortlessly be added to your Minitab license and can provide powerful insights with limited variables and datasets. 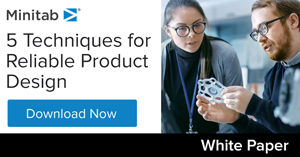