Amongst the pile of tools in my garage is a nice six-inch caliper, which I use for the occasional minor project around the house. And even though I work in one of the finest dimensional calibration laboratories in the country, where we calibrate thousands of calipers every year, my own personal caliper has not been calibrated in over 20 years. Some people are shocked when they hear this—they ask me how can an expert in calibration not even take care of his own caliper? Hypocrite? Heretic? My response is that I am knowledgeable enough about calibration, and understand the risks with calibration intervals, that I know it is not worth the trouble to calibrate this particular caliper.

In general, calibration is all about managing risk in measuring systems. The extent and importance of calibration depends on the role of the measuring system and the risks that can occur if the measuring system is no longer performing as expected. Every organization has a different threshold of acceptable risk and this has a significant impact on the setup of the calibration system. Regarding the caliper in my garage, I mostly use it to measure small drill bits and Allen wrenches for minor household projects (as my eyes have gotten old and the small print is hard to see on those little things). In my case, the impact of making a bad measurement with my caliper is minor—the worst situation is maybe putting too big of a screw hole in the wall and then having something else that needs to be fixed. The probability of my caliper being so far off that it will impact my low accuracy needs is negligible. In contrast, some manufacturing companies calibrate their calipers with intervals as low as every three months. The more frequent use of the caliper, combined with a more serious impact of being wrong in measurement, demands a shorter calibration interval.

Calibration is like insurance against risk. The best choice financially would be to buy insurance coverage the day before you need it. However, if you do not buy any, and something happens, then you have serious problems. In calibration, we would like to calibrate and adjust measuring instruments the day before they might negatively impact our quality. We select calibration intervals based on the expected performance of the measuring instrument to best manage the risk. In addition, just as insurance is only as good as your coverage plan, the calibration is only as good as the thoroughness of the calibration method. 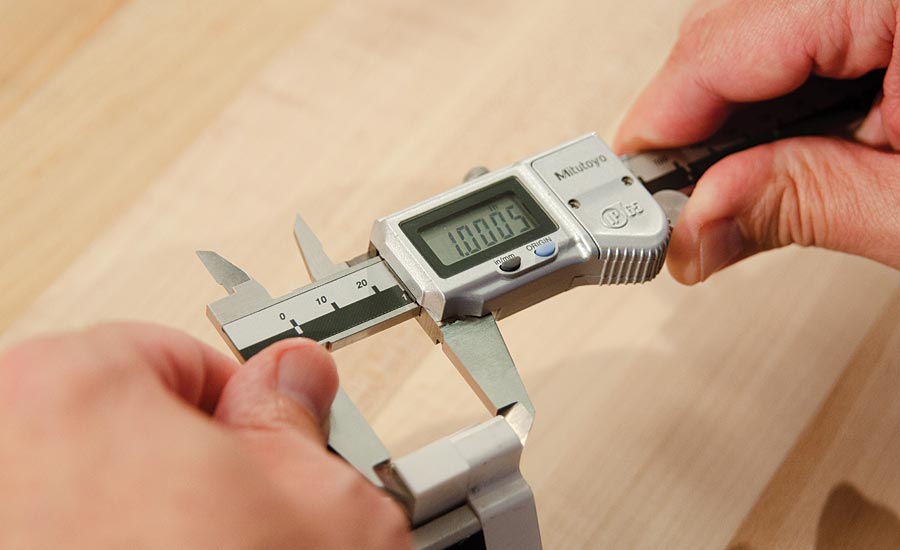 ↑
During calibration, the outside measuring jaws need to be checked at different distances from the beam.
↓ 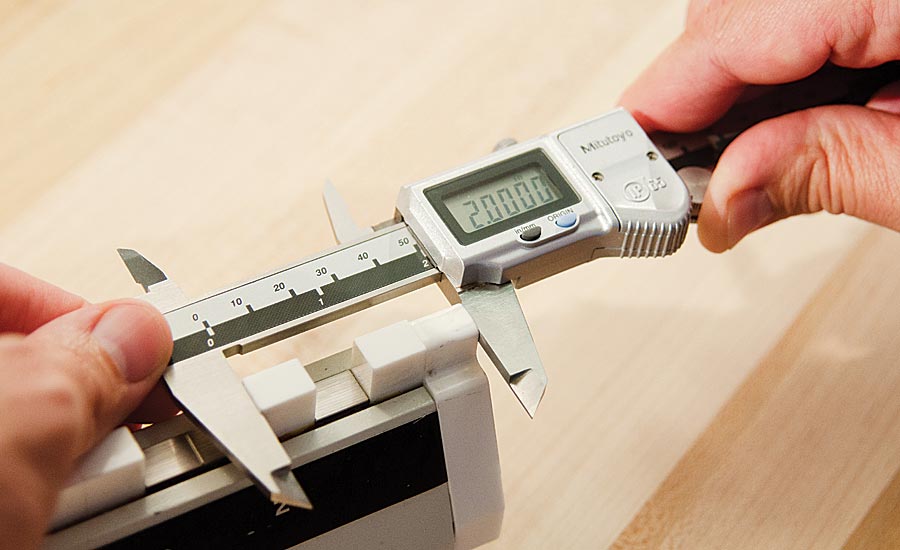 There are a number of readily accessible tools to manage and reduce quality risks in calibration. Over the years, a number of excellent consensus standards have become available that can be implemented by any organization to improve calibration practice. In the United States, the American Society of Mechanical Engineers (ASME) has the responsibility for developing American National Standards in the dimensional measurement area. That work is managed by a committee called ASME B89, which is comprised of experts from a variety of organizations, including end-users, equipment manufacturers, calibration providers, distributors, and government agencies. The experts on ASME B89 volunteer their time to develop the best documents possible, and all that expert information is available in the published standards.

The ASME B89 standards cover many of the common dimensional measuring instruments and gages, such as micrometers, gage blocks, dial indicators, ring gages, coordinate measuring machines, and most recently, calipers. The newest standard, and the first American National Standard on vernier, dial, and digital calipers, was published May 31, 2018. Like many of the ASME B89 standards, the caliper standard, which is called ASME B89.1.14-2018, discusses both specification and calibration. The experts on the caliper project carefully considered the best methods to specify and calibrate calipers to reduce risks to users and yet be economical to perform either in-house or with commercial calibration laboratories.

The ASME B89.1.14 caliper standard recognizes the four common types of measurements made with calipers: outside lengths and diameters, inside lengths and diameters, depth, and step measurements. Starting with the large outside measuring jaws, the standard defines requirements that need to be followed in calibration. This includes a minimum of three to five test points, depending on the size of the caliper, distributed across the measuring range. In addition, the test points must be located on the outside measuring faces at various distances from the beam of the caliper to test the influence of the flatness and parallelism of the jaws.

For most types of calipers, the zero point is established by closing the outside measuring jaws. Due to this, all the other types of caliper measurements—internal, depth, and step—may have a shift in their zero. The ASME B89.1.14 standard therefore requires at least one test point using each of the other measuring faces. The standard recommends keeping the lengths for those test points relatively short, for example around one inch. Multiple test points across the measuring range is usually not necessary with the other measuring faces, as the caliper scale is common between the different types of measurements. However, there are many different configurations of calipers, and the standard tries to address the various designs available. 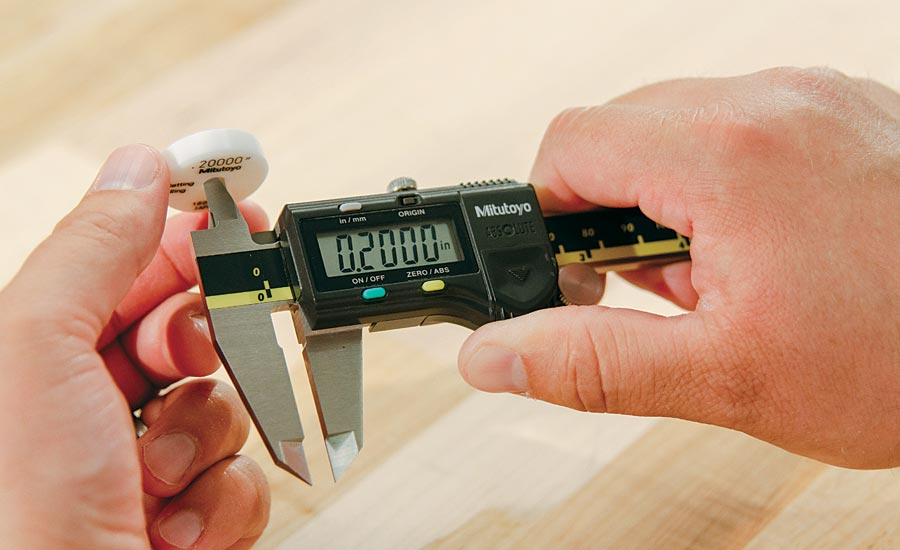 During the calibration of a caliper, a 5 mm (0.2 inch) ring gage is used to test the crossed knife-edge internal measuring faces.

The experts on the ASME B89.1.14 caliper project team tried to find a good balance of thoroughness in testing to reduce reasonable risks while keeping the calibration practical and economical. Some organizations may desire to do additional testing during calibration, but the standard defines a clear and finite set of testing that the experts on the project team considered sufficient to demonstrate conformity to specification. Instead of guessing or searching for information online, the standard provides a well-vetted document full of expert information that can be easily implemented into calibration practice.

While the caliper standard is new, for many years there have been ASME B89 standards available for other measuring equipment, such as micrometers, indicators, and gage blocks. All these standards are presented in a similar manner, and they are full of expert information that can be used in calibration. The standards address some of the more common problems seen in dimensional calibration practice, such as: 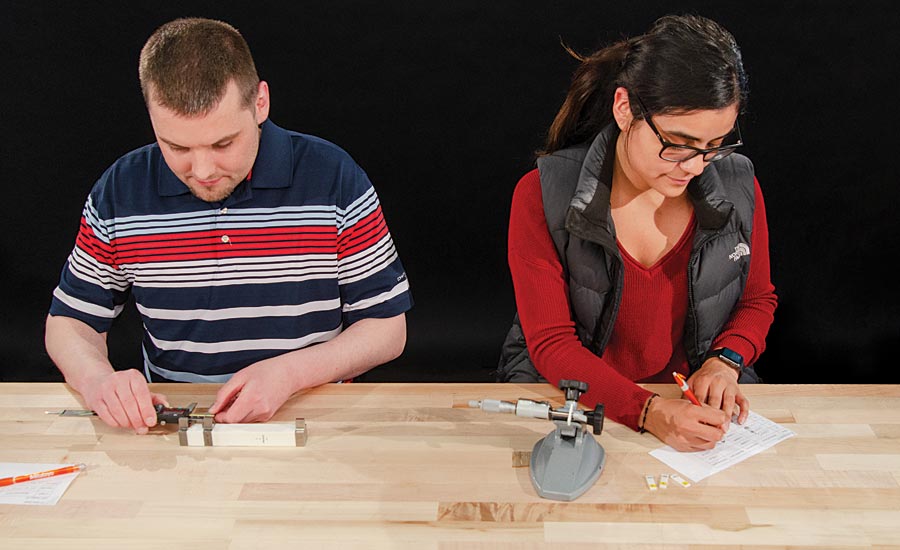 Testing measurement skills in a training course on calibration.

Calibration is a tool to manage risk, and the ASME B89 standards provide the necessary information to find a good balance between risk and cost in calibration. Q

Dr. James G. Salsbury is the general manager, corporate metrology, at Mitutoyo America Corp. (Aurora, IL). He is an active participant in national and international standards efforts in dimensional metrology and tolerancing, including being a member of the ASME B89 Main Committee, chair of ASME B89.1 on Length, and a U.S.-appointed subject matter expert to ISO/TC 213. Dr. Salsbury also serves NCSL International as the chair of the Dimensional Metrology Committee and as the coordinator of the Chicago section. He has been working in the measurement field for 25 years and has been with Mitutoyo since 2000. For more information, email jim.salsbury@mitutoyo.com.