Help us clear up the confusion of NDT terminology.

Effective communication only happens when the intended message is expressed successfully by one person and received and understood by another. If executed correctly, it cuts down the unintended consequences that arise as a result of miscommunication. When a word is chosen to communicate a thought, idea, or description, what assurances are there that the intended meaning will be clearly understood by the recipient? Unfortunately, there are none. This is especially true today as the use of social media, email, texting, and video conferencing have circumvented the need for phone calls and face-to-face communication. With technology moving so quickly, it is more evident now than at any point in history that how we communicate and the amount we are inundated with has created a dilemma where so much non-verbal communication is being ignored.

The importance of choosing the right word may not seem critically important to everyone; however, using the wrong term in the nondestructive testing industry (NDT) can have severe consequences.

For those unfamiliar with NDT, “Nondestructive testing (NDT) can best be defined as an examination, test, or evaluation performed on any type of test object without changing or altering that object in any way, in order to determine the absence or presence of conditions or discontinuities that may have an effect on the usefulness or serviceability of that object.”¹ 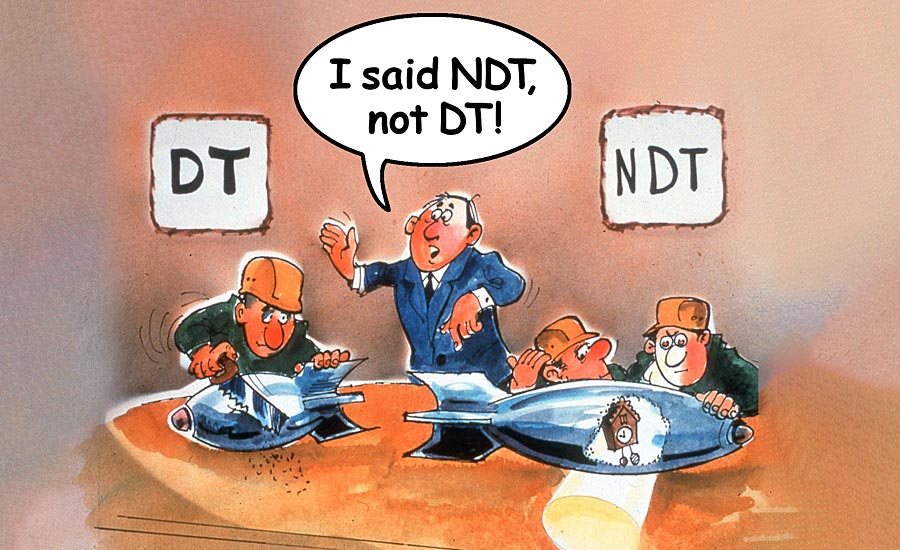 Nondestructive testing is a required inspection used by many industries to ensure the safety of the public by ensuring the reliability and integrity of construction materials, manufacturing and fabrication processes, and the products in use meet the minimum quality standards required. For example, before an aircraft is placed in service, hundreds if not thousands of its components are inspected for compliance to specifications utilizing various nondestructive testing methods. After the aircraft has been in service, nondestructive testing is again performed at specified maintenance intervals on many of these same components in order to make certain they continue to have the reliability and integrity required for airworthiness.

“The term defect is defined as a discontinuity whose size, shape, orientation or location (1) makes it detrimental to the useful service of its host object or (2) exceeds an accept/reject criterion of an applicable specification.”³

Put simply, not all discontinuities are defects, however, all defects are discontinuities which are rejectable! When terms are misused, the disposition of test objects may be inaccurate which can lead to costly unnecessary repairs, scrapped components, and even worse, the possibility of catastrophic failures.

The following example provided by renowned NDT professional and veteran Charles J. Hellier demonstrates why the use of correct NDT terminology is of vital importance.

“Over the many years of my experience in Nondestructive Testing and related quality/inspection fields, there have been many instances where incorrect terms have been used. This has caused confusion and improper dispositioning. The one example that comes to mind occurred when working in the capacity as Supervisor of Nondestructive Test Engineering at Electric Boat in Groton Connecticut. I was called to look at an indication a metallurgist interpreted as a crack (“defect”) in a rather critical component. A crack in this case would have required a significant and costly repair or possibly the scrapping of the part. After careful evaluation, it became apparent that the linear indication interpreted to be a crack (“defect”) was nothing more than a nonmetallic stringer (“discontinuity”) which was easily removed by careful grinding. There were other situations where incorrect interpretations caused needless repairs because an indication was interpreted as a “defect”. The term defect implies a rejectable condition, which could potentially lead to failure of the part. The incorrect interpretation of indications can result in needless repairs and considerable cost. It is essential that NDT personnel be thoroughly familiar with the types of discontinuities that can be encountered, and disposition them in accordance with the applicable codes or standards.”⁴

This example shows how the term defect was used incorrectly when the correct term was discontinuity. Using the incorrect term in this example was the result of a misinterpretation.

Focusing on which commonly misused terms the nondestructive testing workforce seems to struggle with the most, we identified sixteen fundamental terms. The table lists the terms that we believe should have unequivocally precise definitions that apply to all methods of NDT.

In order to validate our concerns and confirm the existence of the problem, we sent out a survey to more than 50 NDT Level III professionals across the country and asked them to provide definitions for each term listed. Unfortunately, only 15 stepped up to the challenge by completing the survey. Why did some not respond to the survey? Were they simply ignoring more non-verbal communication, or is it possible that the nature of the subject is too controversial? We will leave that for the reader to ponder.

The table below lists the results of the survey responses. The common NDT terms are listed in the left column, and the total number of definition variations for each term out of fifteen survey responses is shown in the column on the right.

Not surprisingly, of the responses received, many did not quote the exact definitions given by the American Society for Nondestructive Testing (ASNT) in their NDT Handbook glossaries⁵. Could this be an indication that our participants do not have a common source of definitions they can rely on?

The most common standard quoted exactly by any participant was ASTM E1316 - “Standard Terminology for Nondestructive Examinations”⁶. This may explain why so many professionals have extended experience with ambiguous terminology used in the nondestructive testing industry. Many of the industrial codes and standards often specified for nondestructive testing projects also do not quote the ASNT definitions verbatim. In fact, most of the terms listed above are not defined in the codes, standards and specifications we sampled.

Even with the small sample size, the definitions of the most foundational terminology being used by the NDT workforce in the United States are moving targets. We found this concerning, and wondered if this gap in standardization might be a global problem as well. What we discovered is reason to believe there is still hope. This problem is not a global one. Some countries have had this issue in the past and have addressed it by navigating through the ambiguity and developing their own harmonized standards for NDT terminology.

British, European, and international standards that address this issue are in use in other parts of the world. For example, take the following excerpt from the Personnel Certification in Nondestructive Testing (PCN) document: PCN/AERO Appendix Z1– NDT Training Syllabi,

Correct Terminology is a necessary demand for a worldwide-applied technology. It is needed for communication between contracting parties, testers and certifying bodies. Terms like “Indication”, “Imperfection”, “flaw” and “defect” need a precise and unequivocal definition to avoid any confusion and misinterpretation of results. The European Standards EN 1330–1 and –2 (for different NDT methods) and the synonymous International Standards (partly drafts) give the agreed denominations and short definitions of terms.

Furthermore, the international NDT community has created standards that address NDT terminology that are incorporated by reference into their various industrial codes and standards.

The need for domestic standardization of fundamental NDT terms is real. In order for the nondestructive testing industry to be in concert with other industries responsible for the development of codes and standards, for manufacturing, fabrication, welding, etc., this disconnect must be recognized and addressed by NDT industry leaders. Without the harmonization of these terms that are foundational to our industry, the common goal of public and individual safety remains unnecessarily at risk.

We have the opportunity to right the ship so that every nondestructive testing student, practitioner, educator, committee volunteer, or manager can be confident that we are all speaking the same language. 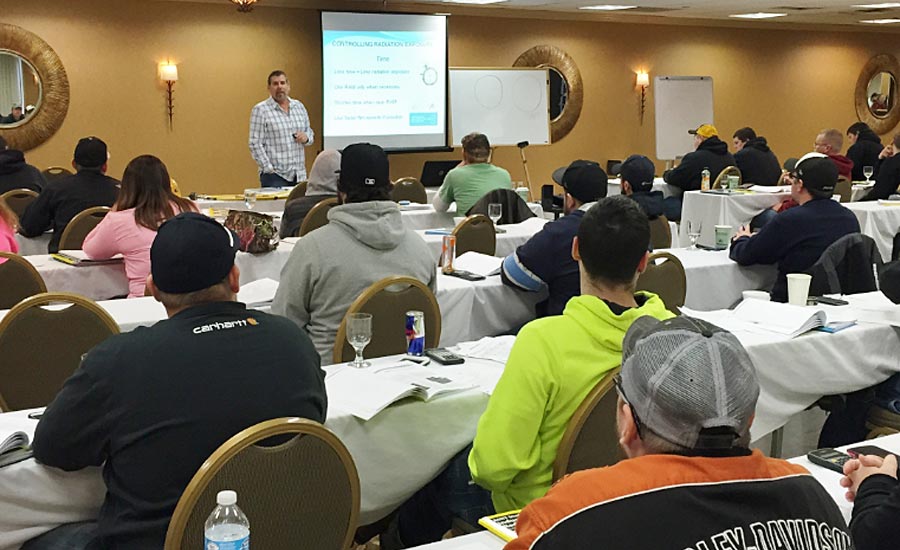 Before Moving Forward, We Need To Ask Ourselves:

The fact is, change is inevitable and the responsibility to stay current belongs to Everyone in the nondestructive testing industry. If the ambiguity in these terms and their definitions is allowed to remain, their misuse and the confusion it creates will continue to lessen the effectiveness, efficiency, and value of the inspection services our industry provides. If these foundational definitions are not revised and given precise, unequivocal definitions that are universally accepted, then the misuse, confusion and misinterpretations will continue.

Let’s start the process of standardizing fundamental NDT terminology in the United States and continue improving the NDT profession.

Standardization is the right way to proceed, which will allow Everyone to…choose their words wisely!

Jeri Matza has been involved in nondestructive testing for the past 40 years where he has held several positions. He has worked as an NDT technician, Level III, quality engineer, NDT sales manager, NDT instructor, and business owner. His extensive NDT experience has been in the oil and gas, aerospace, and NDT services industries. He is a graduate of Spartan College of Aeronautics, and previously served as chairman of the ASNT Oklahoma Section as well as participated on various national ASNT committees. Jeri was also a volunteer and participated on the board of directors of the Nondestructive Testing Management Association (NDTMA). Today he works as an NDT instructor for the International Union of Operating Engineers Local 112 in Anderson, Indiana, where he trains NDT technicians in the pipeline industry. Jeri is also the proprietor of NDT Connect Inc., which is a training and NDT consulting company.

The Evolution of NDT Training

The Need for Quality NDT Training

NDT Personnel Certification and Training: It’s Time to Do It Right