Aerospace is leading the way in the IIoT, with a heightened focus on additive manufacturing, the digital thread, and lightning-fast 3D measurement and inspection technologies.

The Internet of Things (IoT) refers to the growing network of physical objects that are embedded with sensors to enable connection with each other and exchange of data. The Industrial IoT (IIoT) includes those IoT devices in the industrial sector that also provide extremely large data sets that can be computationally analyzed to reveal patterns, trends, and associations, known as Big Data.

IIoT solutions have transformed manufacturing, to the extent that terms like the Fourth Industrial Revolution and Industry 4.0 are now used interchangeably to define the changeover. And while many sectors have embraced the IIoT, perhaps no other sector has changed so drastically, or produced such impressive results, as aerospace and defense.

The report acknowledges a continued decrease in the cost of IoT sensors and controllers as a major factor for the increased adoption of IIoT hardware, software, and services. Reasons for these reduced costs include an overall increase in internet penetration and growth in demand for automation and analytics. 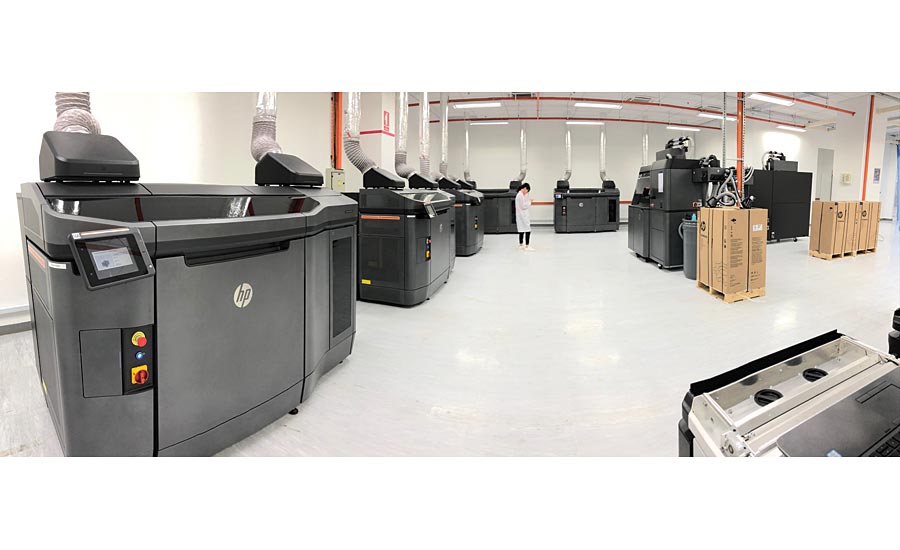 All of the biggest players in the aerospace and defense market—Airbus, Boeing, GE Aviation, Lockheed Martin, Northrop Grumman, and UTC—have sped up and optimized parts production through a wide range of IIoT solutions. These include predictive maintenance sensors and software, increased automation and additive manufacturing (AM) in production, and enhanced quality systems that operate on the digital thread: a communication framework that uses data to connect traditionally siloed elements in manufacturing processes and provide an integrated view of an asset throughout the manufacturing lifecycle.

Since publicly launching its Multi Jet Fusion technology in 2016, HP has announced two major partnerships of note to aerospace and other high-volume markets. In 2017, HP and Deloitte revealed an alliance to create more flexible manufacturing supply chains and optimize efficiency across the manufacturing lifecycle. In 2018, HP and Jabil reported that Jabil had doubled the volume of its HP Multi Jet Fusion installation, growing from six to a dozen Jet Fusion 3D printers across the U.S. and Singapore.

“[Jabil has] more than 100 facilities in 29 countries, working on an endless variety of products,” says Scott Schiller, vice president and global head of customer and market development at HP 3D Printing. “With a global footprint that large, a traditional supply chain requires an enormous amount of time, expenses, and resources to get from point A to B in each step of the manufacturing process, because of the great distances and physical friction involved.”

The answer to this problem, Jabil and HP agree, is distributed manufacturing.

The combination of a distributed manufacturing framework and rapid AM technology, Dulchinos and Schiller note, erases the need to warehouse and inventory spare parts, distribute and re-distribute prototypes across functions, pre-order and stockpile materials, and ship to end users around the world.

“Multi Jet Fusion cuts that cost and time, shortens those distances, eliminates those emissions, speeds time to market, and optimizes those many millions of interactions by reimagining the supply chain for our digital world,” Schiller says.

To that end, Jabil also has added the ability to integrate and streamline the manufacturing process digitally with their new, cloud-based Additive Manufacturing Network. One goal of the network is to enable parts to be fluidly designed, prototyped, and produced across far-flung locations; another is to move production workloads to the regions and markets that make the most sense in real time. Both could be boons for aerospace manufacturing supply chains, especially as more automated and data-driven manufacturing progresses.

Hexagon also is a strong proponent of the digital thread, making the concept a centerpiece of Hexagon’s annual HxGN Live conference in Las Vegas this summer. Norbert Hanke, president and CEO of Hexagon MI, remarked ahead of the conference that the future of digital manufacturing relies on the digital thread and all it entails: predictive quality, for example, and product quality becoming “a shared responsibility between stakeholders at every stage of the process.” In general, Hexagon has made a point of educating OEMs and quality professionals, particularly those in the aerospace industry, about how an enterprise can weave design and engineering, production, and metrology together into one agile, data-driven ecosystem. 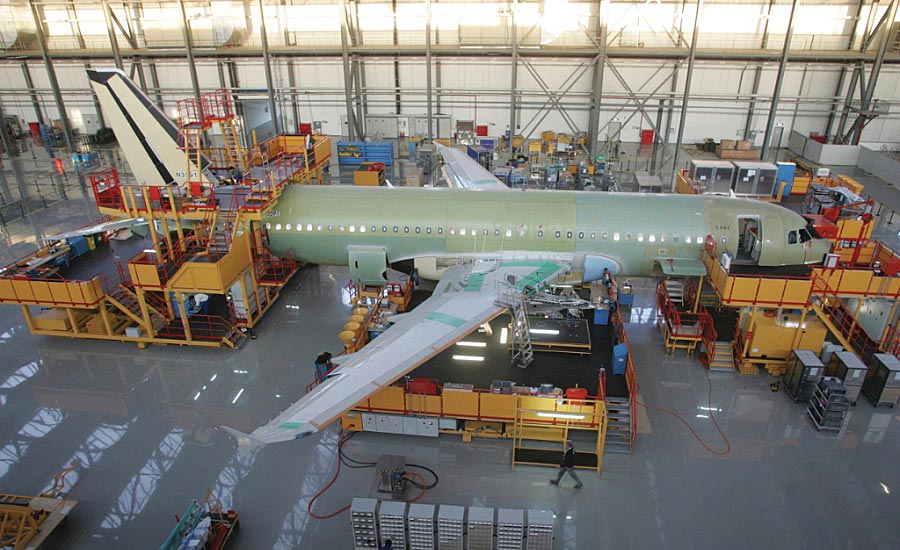 Hexagon offers dedicated training to any of Airbus’s tier one suppliers that need to integrate advanced metrology into their manufacturing process. Source: Hexagon Manufacturing Intelligence

Today, more manufacturers are forgoing gages or touch probes for non-contact measurement systems whenever specifications allow, because better optical components, cameras, lighting, and software have naturally increased the technology’s capabilities. In terms of production quality and swiftness, the advantages of noncontact metrology are clear. Millimeter accuracy and speed at millions of points per second—combined with ease of use, flexibility, and rapidly decreasing costs—bode well for higher throughput and a dependable ROI.

Fulfilling the Promise of Industry 4.0

Though no one can say with certainty what manufacturing shop floors will look like in the future, for aerospace or for any other industry, Schiller has an idea. He believes that the factory of the future “will embrace the disruptive technologies driving the Fourth Industrial Revolution: artificial intelligence, advanced robotics, big data, nanotechnology, and 3D printing.”

Schiller also predicts that the implications of how factories will be digitally transformed by 3D printing will extend far beyond the factory floor.

“Product design and innovation will be accelerated, supply chains will be shortened, and operations will be redesigned,” he says. “Manufacturing will be localized, new jobs will be created, workers will be upskilled, new markets will proliferate, and a new manufacturing economy will emerge—where the factory is no longer an isolated production facility, but a critical, hyper-connected hub in a sprawling global digital network that is bringing manufacturing into the future.”