Cobots for the Win

Collaborative robots helped manufacturers keep production lines running during the pandemic. They're accessible to small- and medium- sized businesses. And their simplicity just may help to shrink the skills gap.

Collaborative robots, or cobots, help humans and robots work together safely. Small, medium and large companies are increasingly choosing these human-friendly versions over traditional industrial robots, which are complex to use and are typically relegated to safety cages.

“Traditional robots are, on the whole, difficult to program,” says Joe Campbell, senior manager, Universal Robots. “They come in thousands of different configurations and models for each company.”

Podcast:
Collaborative Robots: The Reality Of Working With Robots

Cobots, however, can tag team applications with operators in the same work area. Collaborative robots can do heavy lifting and perform dangerous tasks, while operators can opt for jobs that require more dexterity or knowledge to complete, says Amanda McLenithan, senior engineer at FANUC.

Manufacturers can securely implement cobots without fencing or guarding, which helps save costs. They can also be made mobile when operators simply place them on wheeled carts.

“This allows operators to move cobots to other work areas, which increases flexibility to quickly take on different tasks,” McLenithan says. “Collaborative robots, especially those that are on mobile carts, allow companies to take on more high-mix/low-volume applications that would be difficult to implement using traditional industrial robots.”

In general, robots “eliminate the need for precious human labor to carry out dull, dirty, and dangerous tasks and, instead, allow associates to focus on more value-added activities that are uniquely suited to human problem solving,” says Jeff Huerta, senior vice president at Vecna Robotics. “Simply put, collaborative autonomous mobile robots allow humans to do what they do best.”

This bodes well for quality.

“Robots, whether collaborative or traditionally industrial, are great at doing repetitive tasks like assembly,” says Jeff Burnstein, president of the Association for Advancing Automation. “Unattractive jobs that would be tough for a person to do with exact precision, over and over again, are perfect for robots. As a result, quality goes up.”

Robots’ impact on quality only sharpens when machine vision systems enter the picture.

“When machine vision is added to a robot, this allows the robot to perform inspection on parts and processes, and some of the vision systems allow the robot to detect quality issues that may not be visible to the naked eye,” McLenithan says.

“This means that operations will benefit from more regular cycle times, just-in-time initiatives, and reduced non-value-added activity. In addition, the use of mobile robots improved pick and drop accuracy,” Huerta says. 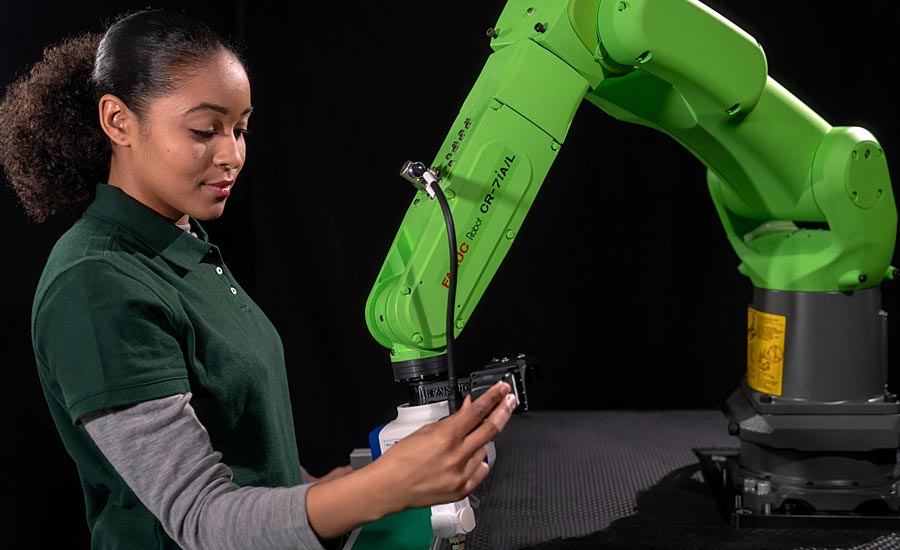 Cobots have particularly shone during the pandemic.

Collaborative robots have been around for about 10 years commercially, says Campbell. In that short time, business has boomed. While the traditional automation business is growing anywhere from 5-7% per year, collaborative automation grew 30% in 2020, he says.

Because cobots are easy to program and set up, they’re now accessible to small-to-medium-sized businesses, which actually make up most of the manufacturing industry.

“There are about a quarter million manufacturing companies in the U.S. and 90% of them have fewer than 100 employees. That’s the bulk of the manufacturing business,” Campbell says. “This area has just not been well-served by traditional automation.”

Small companies that Campbell says he’d “never have made a sales call to” years ago are now snapping up this technology.

“What’s happening in quality right now is there’s a big push to move the quality process close to the manufacturing process,” Campbell says. “The days where there was a great big sterile room and that was the only place that quality occurred? Those days are gone. What makes collaborative automation so attractive is you can take a robot-based inspection cell—whether the robot is putting the parts in front of the sensor or taking the sensor and moving it around over the parts—and you can put it right on the factory floor, right next to a human operator.”

The market has “grabbed onto this new approach to automation,” Campbell says.

Indeed, sales of collaborative robots are currently growing faster than those of traditional industrial robots, according to organizations such as the International Federation of Robotics.

“This is one reason why you see many new products being introduced into the marketplace,” Burnstein says. “Additionally, end-effector companies are developing new end of arm tooling to make collaborative robots more successful at specific tasks.”

Cobots have particularly shone during the pandemic, McLenithan says. Because they can take the place of humans on the line, they can help workers maintain a safe distance from each other.

“This is due to several factors, including a greater focus on risk management and business continuity, as business leaders look to automation strategies to extend their staff and increase their agility in dealing with unpredictable peaks and shifts in demand,” he explains. “Additionally, labor shortages remain a top challenge in warehouse and distribution centers.”

Having a robot lend a hand can help address some of those shortages.

In spite of COVID there is a major jobs crisis in manufacturing, Campbell acknowledges, as the field stares down nearly 500,000 open jobs. Cobots help to shrink the skills gaps, he says, because existing employees can program, operate and maintain this machinery with no previous experience. In fact, Universal Robots says it typically takes less than an hour for an untrained operator to unpack, mount and program a cobot.

“Robots in general and cobots, specifically, let a company automate low-end processes — what we call the dull, dirty, dangerous tasks,” Campbell says. “Because of that, companies can take that skilled human operator and put them on a higher-value task.”

How AI and Machine Vision Intersect