One of the most fundamental decisions in mechanical design is selecting which material a part should be produced from. Often, a variety of factors will influence the success of a part: strength, elasticity, durability, machining requirements, cost… not to mention electrical, thermal, and chemical effects can also conspire against ongoing part performance and longevity.

This may sound daunting, but material selection has been greatly simplified through advancements in our understanding of material properties. Countless material properties that characterize almost every imaginable dimension are now organized within digital catalogs to provide engineers with quick insights as to how a given material should behave when put into service. 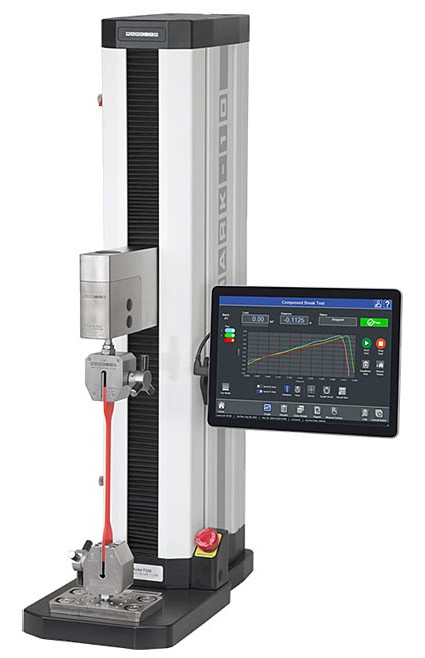 The scope of this discussion will be limited to mechanical applications. But, speaking more broadly, material properties can also characterize electrical, thermal, and chemical behaviors, too.

Since material properties can characterize such a wide range of attributes, countless performance predictions can be made through mere calculation. Calculations can be as easy as arithmetic or they can require advanced software that will map material properties over irregular geometries and then churn through simulations. These calculations are convenient as they give engineers a ballpark idea of how a design might perform—and long before that prospective part tangibly exists.

But any estimate of this kind will be confronted by some inherent limitations. Regardless of how sophisticated the calculations might be, these predictions remain merely theoretical and cannot fully account for the natural complexity of the physical world. Responsibility should demand that we confirm theoretical predictions with actual empirical data. 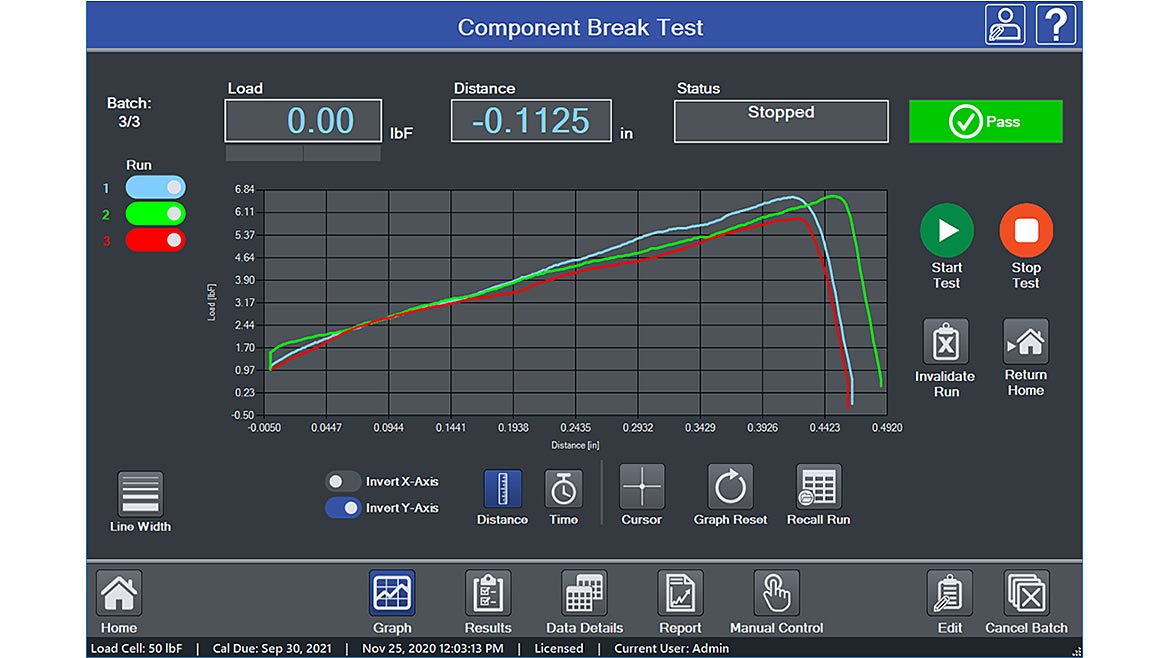 A typical graphical representation of a materials test. Three recent runs are compared for consistency. Source: Mark-10 (Click on the image to enlarge.)

But this is not to say computers have no place within material testing. To properly evaluate the mechanical attributes and behaviors of a material, an advanced force tester can be employed. Traditionally known as a materials testing machine, an advanced force tester relies on an integrated computer paired with a motion controller to orchestrate a series of test stages, automatically capture and calculate predefined test results, and generate graphical representations of the loading event.

By having an integrated computer continuously monitor each aspect of the test as it unfolds while controlling crosshead motion in real-time, operator influence is sidelined to maximize the repeatability and reproducibility of test results. 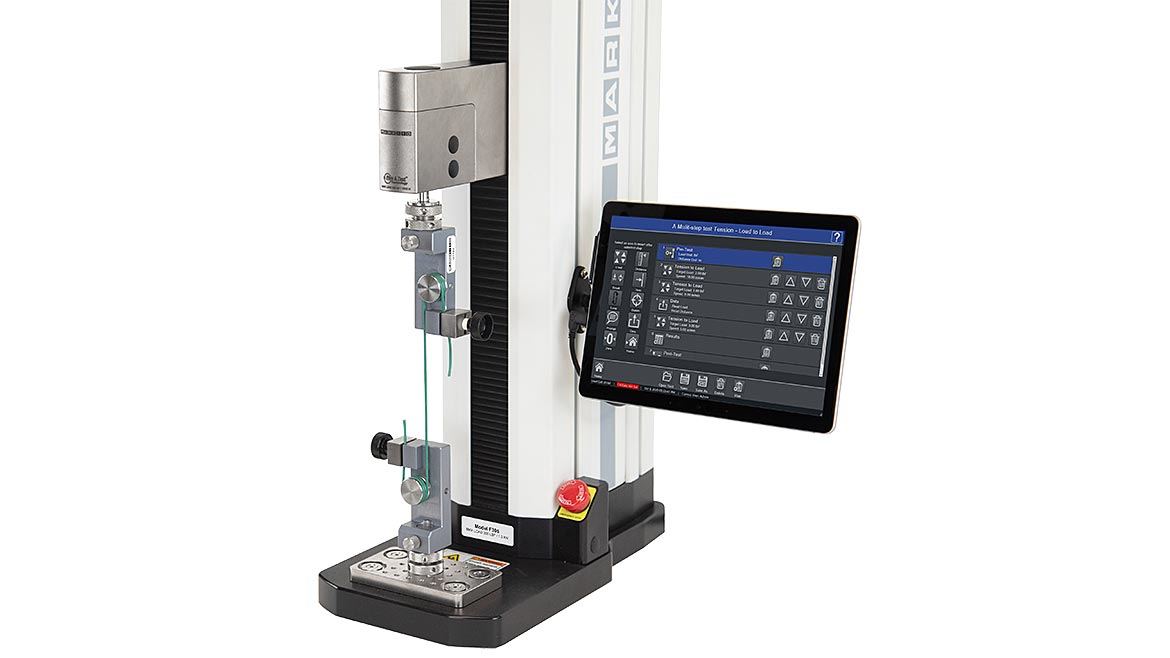 Adhesive properties can be measured by subjecting a tape sample to a 90° peel test. Source: Mark-10 (Click on the image to enlarge.)

Take, for example, the ever-popular material tests that examine peel resistance. Intuition might suggest these tests would be quite simple: just peel something resembling a piece of tape at a fixed speed and capture the peak force that occurred while removing it from some surface. In this scenario, capturing the peak force that occurred during the peel would tell us how much force was required to break the seal at its very strongest point. But—come to think of it—do seals always fail because their very strongest point was not strong enough?

It turns out, evaluating the strength of a seal is actually not so simple. These tests typically aim to determine both the average force that occurred over a given length of peel and also the minimum force that occurred over that same length. Complicating matters further, test methods usually insist that the advanced force tester ignores the beginning and end of the peel to only consider some predefined segment in the middle: 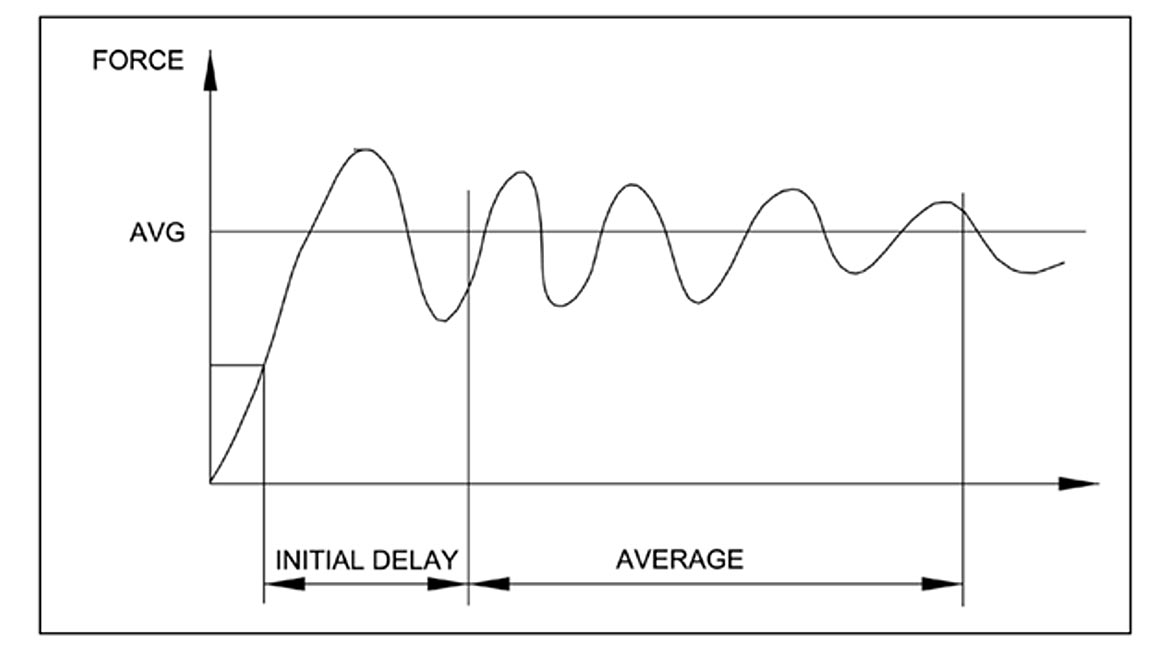 The results of a peel resistance test are expressed as a ratio. Most often, it is the ratio between the average force that occurred during the peel divided by the width of the sample:

The peel resistance ratio of an adhesive allows an engineer to easily approximate the average force a given seal would be able to sustain by just knowing the width of that seal. The convenience of this quick calculation begs the question: why test at all when an engineer could just knock out some arithmetic on the back of a napkin?

In some basic-use cases, this approach might work out just fine. However, what if the application requires the adhesive to be applied a different substrate? Or perhaps an accelerant or coloring agent is added to the formulation? Or maybe the assembly will be taken outside of the normal temperature, humidity, or pressure criteria? Or imagine a circumstance where the adhesive manufacturer publishes performance specifications that omit the tolerances and uncertainties that engineers need to develop a defensible risk profile.

These everyday concerns are excellent reasons why an engineer or quality control professional would enjoy the assurance of designing their own material tests.

Another common testing genre that typically requires the sophistication of an advanced force tester is creep and relaxation rate testing. Creep and relaxation properties both essentially characterize the same phenomenon: increasing mechanical compliance over time, but approached from opposite dimensions.

Creep rate tests apply a fixed load to a sample and then hold that load constant for some predefined duration of time; this action is designed to emulate the constant force created by a weight placed atop a sample or pulling downward on the sample. During the hold period, the advanced force tester must constantly measure and record the ongoing change in sample deflection that continually occurs. It will present the creep rate as sample deflection per unit of time, as the following formula describes:

As far as most mechanical tests go, creep rate testing requires the advanced force tester to compute the derivative of sample deflection taken with respect to time. This produces a test result that is dimensioned as a slow speed. And, since most creep and relaxation rates are nonlinear, the method by which this rate of change is calculated can dramatically impact the value, meaning, and reproducibility of test results.

Comparing the creep and relaxation rate equations, one can see how force and distance switch roles:

The results of creep and relaxation rate tests have sweeping consequences. For a moment, just let every load-bearing application you can think of scroll through your mind: this could be everything from the exotic materials used in automotive and aerospace applications, to essentially every construction material in use, down to an ordinary stack of plastic bottles or cardboard boxes that must withstand palletization… the implications are everywhere. While creep and relaxation rates may not garner the excitement of, say, the ultimate tensile strength specification, their subtle importance is nearly ubiquitous.

To reach a high level of confidence before unveiling a product, the material content of that product should be subjected to tests that emulate its prospective service life and generate applicable test results. An advanced force tester’s configurability, repeatability, and reproducibility make it an indispensable tool in validating the mechanical attributes of parts, assemblies, and their constituent materials.

Mark Fridman is the president of Mark-10 Corp. (Copiague, NY). For more information, call (888) MARK-TEN, e-mail mf@mark-10.com or visit www.mark-10.com.
You must login or register in order to post a comment.