In the Industry 4.0 era, sensors in the manufacturing environment must perform high-speed measurements and deliver highly accurate results to ensure reliable quality assurance. Controlling processes in modern production lines requires constant feedback of the machines and robots producing parts, as well as the status of the parts themselves. Distance sensors play a critical role in these applications, sensing positions and displacements to ensure everything stays on track.

A relatively new technique is the confocal chromatic technology, which is suitable for submicron displacement measurement and even one-sided thickness measurement of transparent materials. This noncontact, wear-free method offers a high measurement rate and high accuracies required in today’s industrial equipment. Confocal chromatic systems are ideal feedback devices for both automated processes and quality control inspection systems in a variety of industries. In particular, they are used in cases where laser triangulation sensors provide poor results, such as in confined spaces, or when highly reflective surfaces or transparent objects need to be measured. 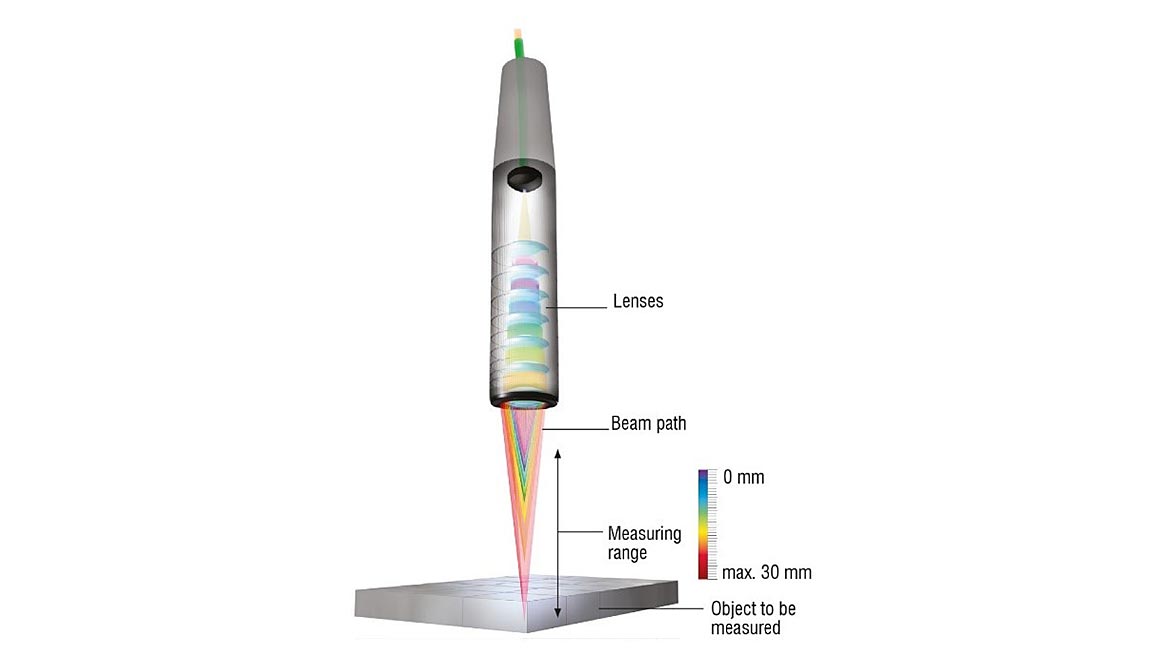 Confocal chromatic distance measurement is made possible by the controlled chromatic aberration of a series of lenses that split white light into a spectrum of monochromatic wavelengths. Source: Micro-Epsilon

Confocal chromatic measurement systems consist of a sensor and a controller. The controller feeds white light from an internal source to the sensor over an optical fiber. Inside the sensor, a set of lenses splits the white light into different colors (wavelengths) as a result of the lenses’ chromatic aberration — an optical distortion that occurs because the lenses have different refractive indexes for different wavelengths. Each wavelength has a characteristic focal length, each of which is focused at a different distance ahead of the sensor.

The sensor projects the various colors onto the target and receives each of the wavelengths as backscattered light reflected from the surface. Only a focused beam of backscattered light, consisting of the specific wavelength that was focused on the measurement target, reaches the optical fiber in the sensor head. Each of the other wavelengths is scattered over an area, entering the optical fiber with less intensity. As a result, the light that is returned to the controller is essentially monochromatic. Inside the controller, a spectrometer detects the wavelength of the light signal and a signal processor calculates the distance corresponding to the wavelength.

In addition to measuring the distance between a sensor and its target to determine object positions and displacements, confocal chromatic sensors are capable of measuring the thickness of transparent materials. Indeed, they can evaluate thickness from one side of a sample with a single sensor, detecting the dimension in both single- and multi-layer glass applications, like solar cells and smartphone screens. 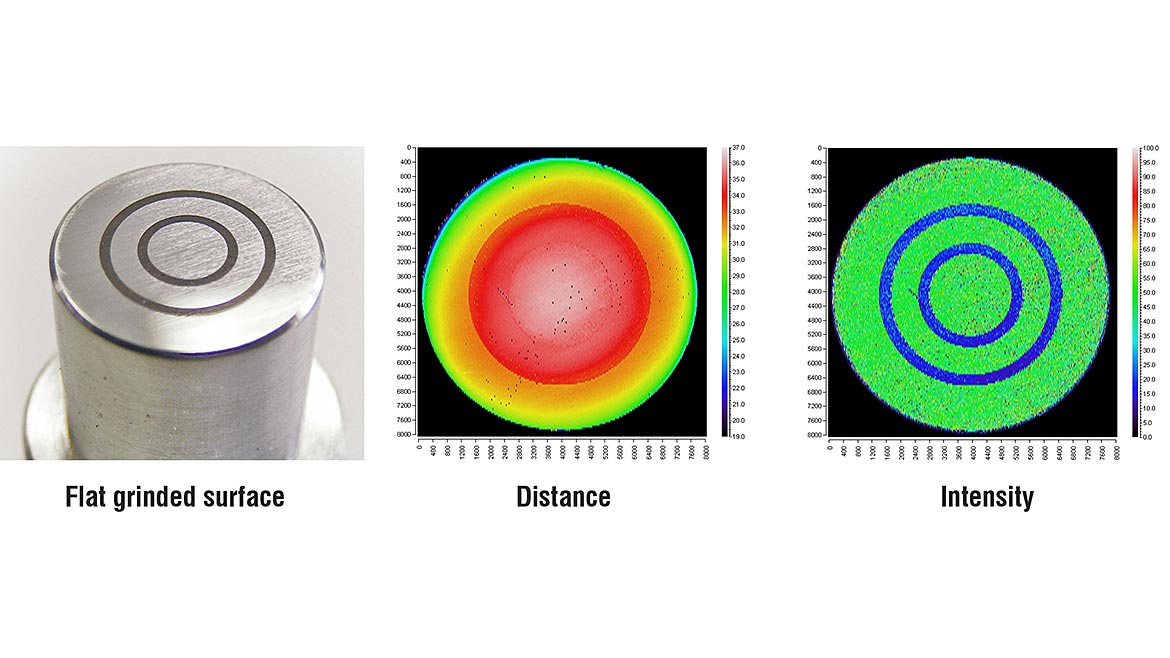 
Beyond distance and thickness measurements, confocal chromatic sensors offer a unique capability to generate detailed surface topographies by tracking the intensity of the signal as the sensor scans across an object. This process shows even the finest surface structures, revealing flaws such as scratches or a damaged finish. Material differences are also highlighted due to changes in reflectivity as the sensor passes over various substances in the target.

Confocal chromatic sensors are ideal for inspecting the smallest elements in semiconductor fabrication, such as bonding wires or IC pins.

An engineer might expect that a sensing technology that can detect even the finest details falls short when it comes to measuring rate. On the contrary, confocal chromatic controllers operate at up to 70 kHz to keep up with high-throughput industrial production lines.

Using automatic exposure control, the controllers quickly adapt to a variety of surfaces, from matte to shiny. For each measurement cycle, the system automatically adjusts the exposure time on the couple-charged device by evaluating the previous cycle. As a result, measurement accuracy remains consistently high even if surface reflectivity changes. Whether rough or mirror-like, the system can handle a wide range of materials, including glass, stainless steel and ceramic. 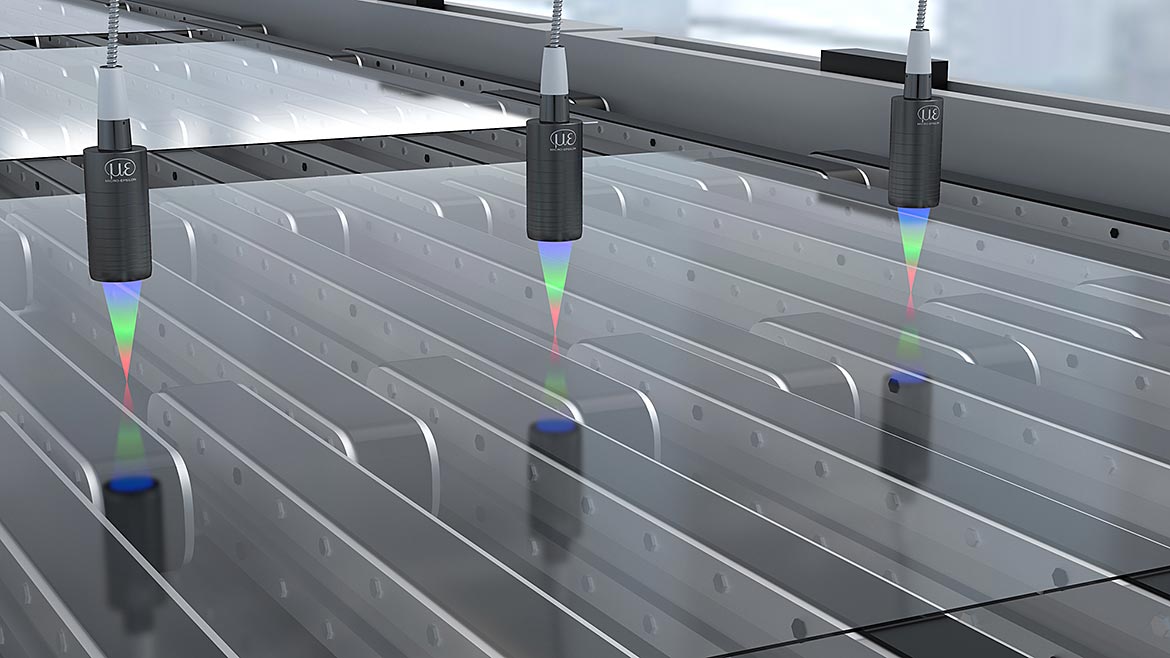 
Confocal chromatic sensors benefit from a beam path aligned with the axis of the sensor, eliminating the shadowing effect seen in other optical distance measurement methods with offset light transmission and reception locations such as laser triangulation. This allows for confocal chromatic sensors to measure inside recesses with no loss of accuracy. For example, they can measure the fill levels inside a tray of narrow test tubes, a situation that laser triangulation could not handle because the reflected light would be obstructed by the test tube’s walls. Ninety-degree models allow precise measurement of dimensional accuracy in bores or cylinders. 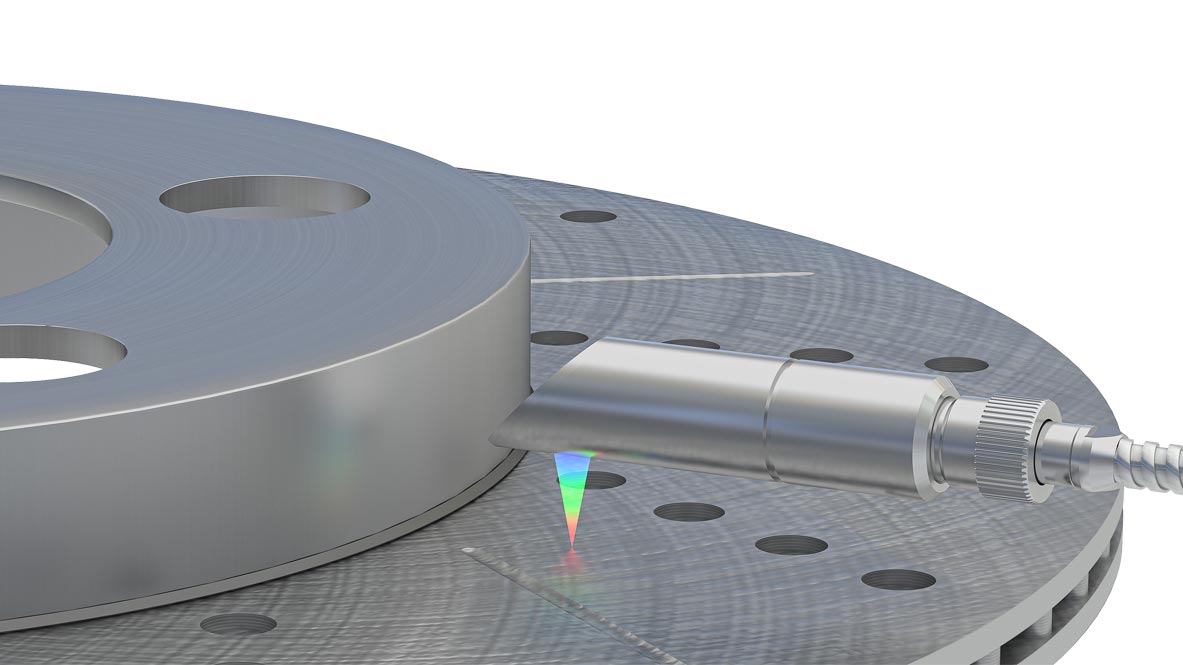 
Confocal chromatic sensors are passive devices with no moving parts and no elements that generate heat or electromagnetic noise. All electronic components are contained in the controller unit, separated from the sensor by a fiber optic cable. Consequently, confocal chromatic sensors have an inherent advantage over other measurement techniques that are vulnerable to measurement inaccuracies from these sources. 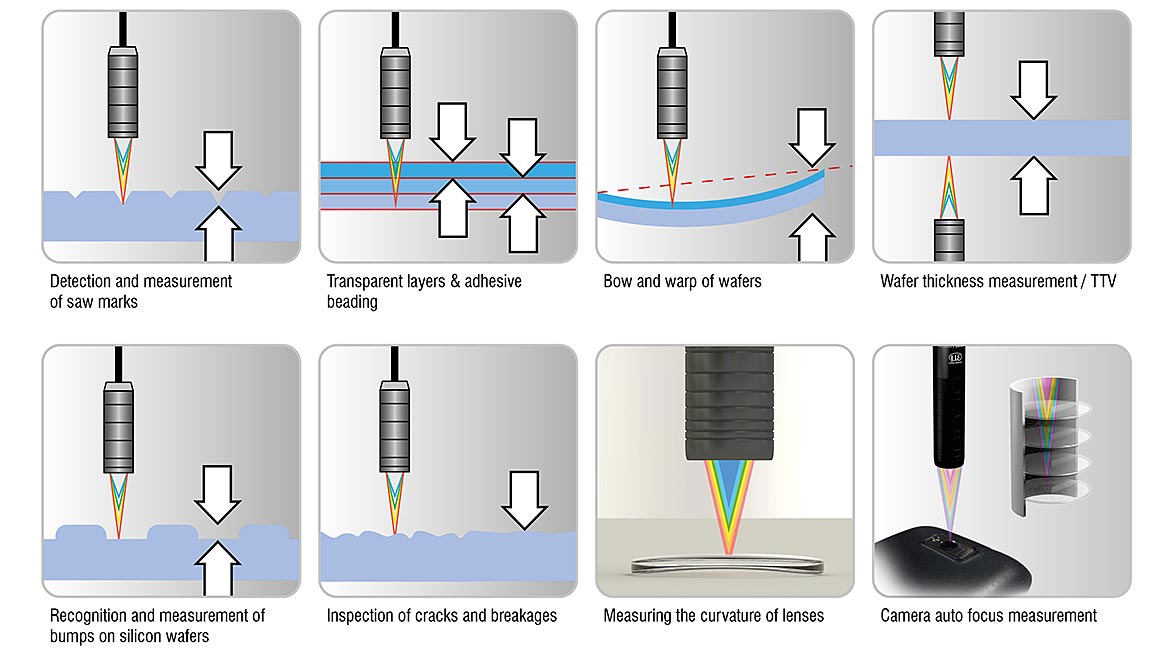