For manufacturers in the 21st century, ensuring the products they produce are of the right quality is paramount.

As customers we demand quality products that are competitively priced, longer lasting and more fuel efficient. We expect our cars to be water and wind tight thanks to correctly fitted panels, doors and seals. Similarly, when we fly, we expect a smooth touch down thanks to precisely fitted landing gear.

Add to this regulators requiring improvements in safety and reductions in noise, waste and carbon emissions and a picture soon emerges of a manufacturing world that is constantly evolving. The pressure is on to make ever more complex products with tighter tolerances in a cost effective and reliable way while always ensuring quality is at the forefront.

Sound familiar? For any manufacturer struggling with these demands, noncontact handheld and automated laser measurement devices can play a big part in helping achieve this.

Optical metrology is the principle behind noncontact laser measurement devices that determines the dimensional profile of a part, by taking a series of pictures of its surface. 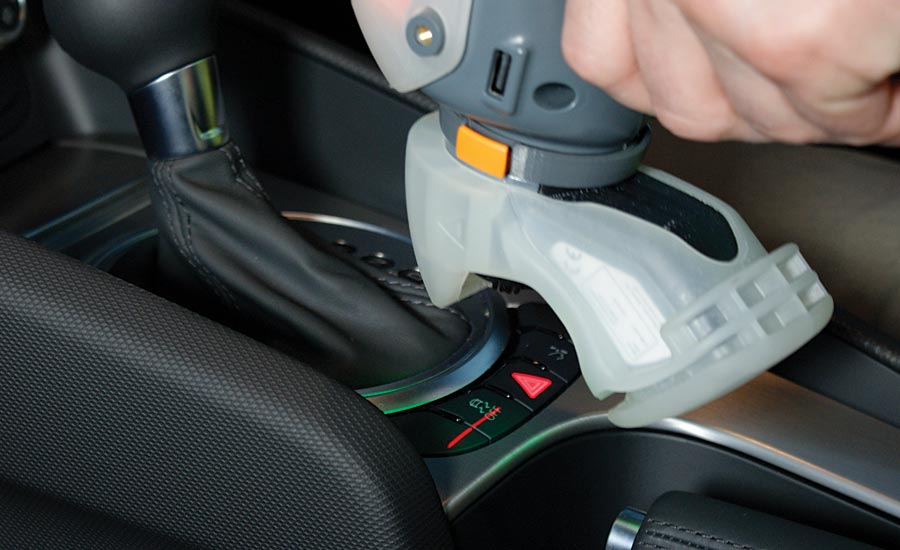 The speed and accuracy of noncontact laser measurement devices means every single car can be measured.

The key to profile measurement is to reliably report the surface in a lot of detail. Laser triangulation technology is used to collect measurements by projecting a laser stripe across the surface of a part to determine the measureable feature. Simultaneously, an integrated camera system takes images of this static laser stripe. As the angle is known between the camera and the laser projection, an algorithm can be written to calculate the dimensions of the surface over which the laser falls and the camera sees. This measured data is then output to point cloud format to generate a digital copy of the surface.

A point cloud is produced by software that uses image processing to convert the images of the profile into a series of points which can be used to extrapolate the shape of the feature. These points allow the system to analyze the measured surface. Because a laser is a clean form of structured light, measured data is highly reliable and can be used as a stable light source for data analysis.

Today’s noncontact laser measurement systems can scan a component’s profile to measure features that include angle, radius, edge break or scratch for example. Measured data is then recorded for statistical process control and traceability purposes and transferred to a computer, enabling the operator to rectify any mistakes in real time on the production line. This ensures components are the correct size and fit together accurately without compromising the quality, cost or time to complete the build.

Noncontact laser measurement devices offer a repeatable set of rules that do not require subjective interpretation, which means that manufacturers have the ability to measure lots of profiles and surface finishes quickly, repeatably and in well-defined ways.

Back in the 1980s manufacturers inspected products using traditional contact measurement devices such as micrometers and Vernier calipers (invented in late 16th/early 17th centuries), which needed to touch the surface of a product to determine its dimensions.

However, there are a number of drawbacks to using a device which has to physically touch the part it’s measuring. First, the part could be damaged or marked.

Second, if a part is unfixed, hinged, or designed to move, contact is likely to introduce an inherently unstable measurement result which is unlikely to be repeatable or produce consistent results when further measurements are collected.

Third, contact measurement devices often have little capability to output measurement data, meaning that operators have to write down results or input them into a computer. This is laborious and prone to errors in terms of interpretation and input.

For many years, optical noncontact measurement was found in engineering workshops in the form of a shadowgraph or profile projector. These devices worked by showing a magnified image against a scale. Components were either taken to the machine to cast, prepare and then measure, or they were cut up to provide samples and placed upon a light table. This would show a projection of its shape in much greater detail so surface conditions could be visually inspected.

Early designs were simply visual checking devices, although later versions also had some digitalization capabilities with additional electronic measurement capability. Nonetheless, the process was slow and not suited to an inline inspection environment.

Today’s noncontact measurement systems have developed to include far more advanced imaging and inspection methods, including handheld and automated optical measurement which means that accurate and repeatable dimensional data is achievable faster and more simply than ever before.

Speed is one of the main reasons why noncontact laser measurement devices are popular as they allow manufacturers to make more quality checks, at a lower cost, with greater repeatability and consistency of measurement. 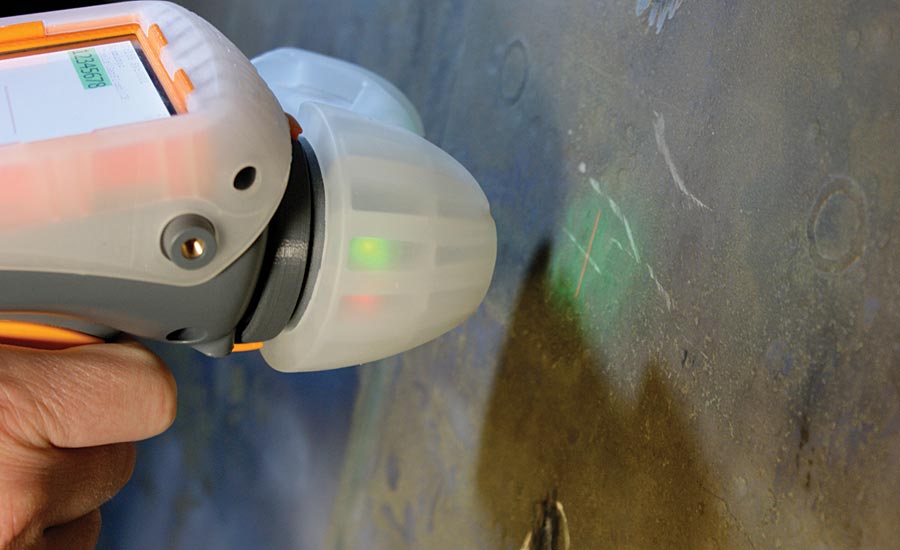 So, let’s take a look at how several industries are using this new way of measuring.

Train carriage manufacturers use noncontact laser measurement devices to check each panel along the length of the production line so they can head off problems before they arise, thereby speeding up the production process.

Traceability is also key. Measured results from noncontact laser measurement devices go directly into a database and are hard to falsify, especially important in safety critical areas such as aircraft engines

Noncontact laser measurement devices are being used to help improve engine efficiency in the aerospace sector by minimizing the clearance gap between the turbine blade tip and the casing on airplane engines. This decreases the amount of air passing though the gap as lost energy, decreases noise levels, improves fuel efficiency, lowers environmental impact and reduces running costs.

When it comes to inspecting helicopter panels, a manual process using a depth gage takes approximately 2.5 hours, whereas using a noncontact laser measurement device takes just 20 minutes, giving a very quick indication as to whether the damaged area, or perceived damaged area, is within acceptable limits.

In the automotive sector noncontact laser measurement devices are indispensable for helping to find potential problems. Devices are used to measure the gap and flush of everything from the fuel cap to the seal gap void between the body and door—they even measure the thickness of the glue bead applied to panels to ensure it’s the right size to prevent leaks!

Reducing downtime is also a factor as to why manufacturers have embraced noncontact laser measurement devices. Production doesn’t have to stop to check quality as the devices provide manufacturers with a fully auditable trail of every product measured. Furthermore, the fact that the device can transfer data to a computer means any modifications can be done on the production line in real time.

Before noncontact laser measurement devices, automotive manufacturers could only measure one out of every three cars. Thanks to the speed and accuracy of laser measurement, every single car can be measured to see if anything has changed during one particular shift.

The renewable energy sector is also using noncontact laser measurement devices to measure the size and depth of scratches on the surface of wind turbine blades, as well as the height and width of deformations in the blades layering which can reduce its lifespan or even cause a catastrophic failure.

Noncontact measurement devices are even been used to measure the gap and flush of high-end white goods in our homes, such as with washing machines to ensure they don’t spring a leak.

Be it planes, trains, cars or turbine blades, quality is paramount for manufacturers today. The ability to quality control using a noncontact laser measurement device not only helps save time, money and resources but it can also improve fuel efficiency and reduce environmental impact and running costs. That’s got to be a win-win-win for consumer, regulator and manufacturer.