This website requires certain cookies to work and uses other cookies to help you have the best experience. By visiting this website, certain cookies have already been set, which you may delete and block. By closing this message or continuing to use our site, you agree to the use of cookies. Visit our updated privacy and cookie policy to learn more.
Home » How A Custom Crusher Used Precise Motion Data To Open New Manufacturing Possibilities
Test & InspectionAutomotive
Case Study

When Donald Engineering sales manager Jim Kortman describes his aluminum extruder client of 28 years, he reaches for a deceptively simple analogy: the Play-Doh Fun Factory. An aluminum billet goes into an extruder, the aluminum is heated, a plunger squeezes the material, and formed aluminum emerges in whatever “profile” shape the die forms.

To reduce overall weight in final assemblies, aluminum structural components are often used instead of steel. The applications of these components can be life-or-death serious, which is why they require the most rigorous and precise crush analysis. Donald Engineering’s client began with making precision-machined aluminum parts for the office equipment market, then moved into automotive parts, including sunroof tracks and structural components. The construction of such bent tracks is more nuanced than it might appear. Kortman likens it to bending a stick over one’s knee, wherein the outer side stretches to the point of snapping (tension) while the inner side crumples and deforms (compression). Achieving such bends with heated material is easier, but it sacrifices dimensional stability. Thus, the client works with cold (room temperature) extrusion.

Having mastered window tracks, the client moved into extruding other car parts, such as frame rails, bumper mounts, engine mounts, strut towers, and similar items that promote body rigidity. Of course, structural parts must be ready to perform in predictable ways in the event of a collision.

“If you think of a car’s bumper mounts, those mounts have to collapse at a certain rate,” says Kortman. “And if they don’t collapse in that way, absorbing ‘X’ amount of energy at a certain speed, they don’t protect the occupants as designed and don’t get certified.”

The client had two immediate choices: send parts out to a certified test center or buy off-the-shelf test equipment. Not surprisingly, the first choice would be expensive over time and entail significant delays — often 10 days or more just to get one result. During that time, fabrication would have to stop to await the outcome. Otherwise, there would be the risk of a failed test and having created a lot of scrap that would require rework or disposal.

As a result, the client turned to choices on the open market. One of the fundamental problems was that the client had to report its crush data in a specific format. Ready-made testers produced data, but that data required significant “massaging” to adhere to the desired format. At all points, the “cookie cutter” approach offered by procuring an off-the-shelf tester introduced compromises, complexity, and hidden after-sale costs. And in the end, the tester wouldn’t have done everything the client wanted.

Finally, Donald Engineering’s Kortman made the client a proposal. “I said, ‘How about we help you build your own – to your needs? We’ll do the hard stuff, and your team can do the basics of the machine assembly.’ Because of their fabrication capabilities, it wasn’t hard for them to create the machine to the specifications they wanted. We helped them build the first one, which worked very well. So, from there this approach evolved into multiple copies with some design revisions to add capability for new products.” 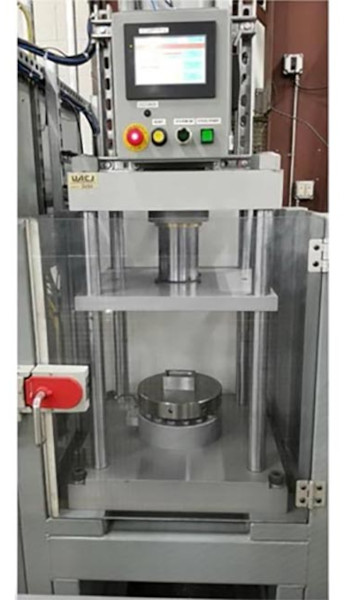 The resulting four-post press featured a machine-control HMI on its top, control buttons, a load cell at the bottom, a press frame, press guidance, a cylinder, a feedback device within the cylinder, a hydraulic proportional valve, and a Delta Computer RMC75 motion controller configured for one output axis and inputs for displacement and force. The apparatus must move slowly and very consistently, so the positional control provided by the Delta RMC was critical.

To create its custom press, Donald Engineering leveraged its wide portfolio of hydraulics suppliers to provide the right components, such as cylinders manufactured by Milwaukee Cylinders and power units from Continental Hydraulics. This ability to select the ideal component for a specific task is an important benefit of having a hydraulic distributor such as Donald Engineering, which also offers design, engineering, and programming services.

Subsequent press designs included high-resolution cameras and dual load cells to show variance in crush forces for each side. The load cells were built on the same axis as the component, hung just below the press bearings and press guidance, with each feeding data back to the RMC75. These were necessary because if one part side started to wrinkle before the other one, the load cells would keep the press platen from canting or skewing to one side. Also, the client wanted to measure the applied force as the opposite side deformed.

Kortman estimates the client saved 30% to 50% off the price of buying an off-the-shelf tester and ended up with the exact solution they needed. He notes that not every company has its own internal machine build group, so savings will vary widely by customer. Also, says Kortman, this customer was able to utilize its own PLC programming capabilities, which helped to shorten the machine development. Kortman refers to the Delta RMC as the solution’s “key,” without which “machine control and data acquisition would have much more difficult to execute. The Delta made this almost child’s play compared to the programming” that would have been required using other control equipment.


From Design To Data 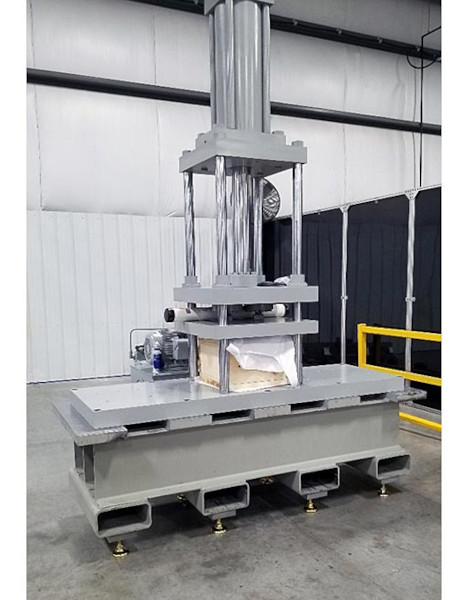 From start to finish, the crush tester took roughly 15 weeks to complete, and that was “working at it quasi-part time.” Two weeks of that involved programming and debugging. According to Donald Engineering, Delta Computer’s help was key in making the configuration process quick and smooth.

“For example,” says Kortman, “Delta helped with some of the Visual Basic integration. We knew how to code and do VBA, but we still had questions: How do we get this or that from the data? How are we going to filter it? Where do we filter it? Delta came in with a lot of advice and coaching on how we could do things better.”

The VBA integration was important for automatically porting the crush data into the client’s cloud. The Delta controller provided all the data points in Excel format, then Donald Engineering’s VBA implementation turned that data into display and controls. In turn, this was turned into a PDF for cloud uploading. All of the “gargantuan” source Excel data (potentially 32 million data points), even down to the seventh decimal place for displacement and fourth decimal place for newtons of force, remained available for anyone who wanted to micro-analyze the crush characteristics.

“The machine slowly works through the simulated situation,” explains Kortman. “And all the time, we are recording the distance — the position — and the average force reported for the two-load cell system. That data gets captured into the data file. We also have the total force, not the averaged force, captured for the single-load cell setups. We’re closing the loop on velocity and deriving energy absorption over time and distance. From all the captured data, we get a graph, and that graph has to fit the end energy absorption requirements.”

The extruder client originally created the tester for one energy-absorbing structural piece, which then developed into other pieces and bumper assemblies, all of which were resounding successes. The company can now turn sample extrusions into validated, finished products in only a couple of days. However, the system has so much potential that now it is being used for different simulations at different speeds across a range of parts. It can accommodate different criteria for crush zones and change how reports look to suit different reviewers’ needs.

“There are electro-mechanical companies offering direct competition to this,” says Kortman. “But one most likely won’t even get close on life expectancy. Another can’t do the tonnage and won’t fit the size of these structural components as we get into larger sizes. And there’s dealing with their canned software. By the time you’re done, you’re into a custom machine no matter what, so why not start with the one you really want and need? Because we had the accuracy and flexibility of the Delta controller here, the customer can keep adapting the tester into new product categories. It’s helping them expand their offerings and win new business.”