Meet John Vandenbemden, an auditor, consultant and quality expert as well as a great person to work with.

Auditors may not have a reputation for great comic timing and super sweet dispositions, but that’s where John Vandenbemden stands out.

John will invite you to eat with him and his wife if you are traveling alone at an international standards meeting. When offering constructive criticism, he won’t make you feel defensive. As an auditor, you’ll want him to be the one to do your next audit. As a teacher, he knows the answer to your questions and is happy to respond long after class is over. And this former college offensive lineman has been described as super sweet and friendly.

If you’ve been lucky enough to work with John, you probably would like to work with him again, both for his friendly demeanor and helpful skills.

When talking to John’s colleagues and peers, they couldn’t say enough about his intelligence, his work ethic, and his positive attitude. They raved about his depth of knowledge, extensive industry experience, and sense of humor. They said they enjoyed working with him and spending time with him after a meeting was over.

His career has spanned a range of topics, as you can see by the presentations he’s made over the years, from basic shop math to automated gaging to acceptance sampling.

While his colleagues are quick to praise him, John also makes sure to spread the accolades around. “A lot of this would not happen without the right mentoring and people taking me under their wing,” John says. “They provided guidance, trusted me to do things. The honor goes to so many people. Everything you work for is a team effort. Success is by finding and locating good people that work with you “

John has been in the field for more than forty years and has truly distinguished himself in the area of quality. For his skills, dedication to standards and expertise in seemingly all things quality, John Vandenbemden is our 2022 Quality Professional of the Year. 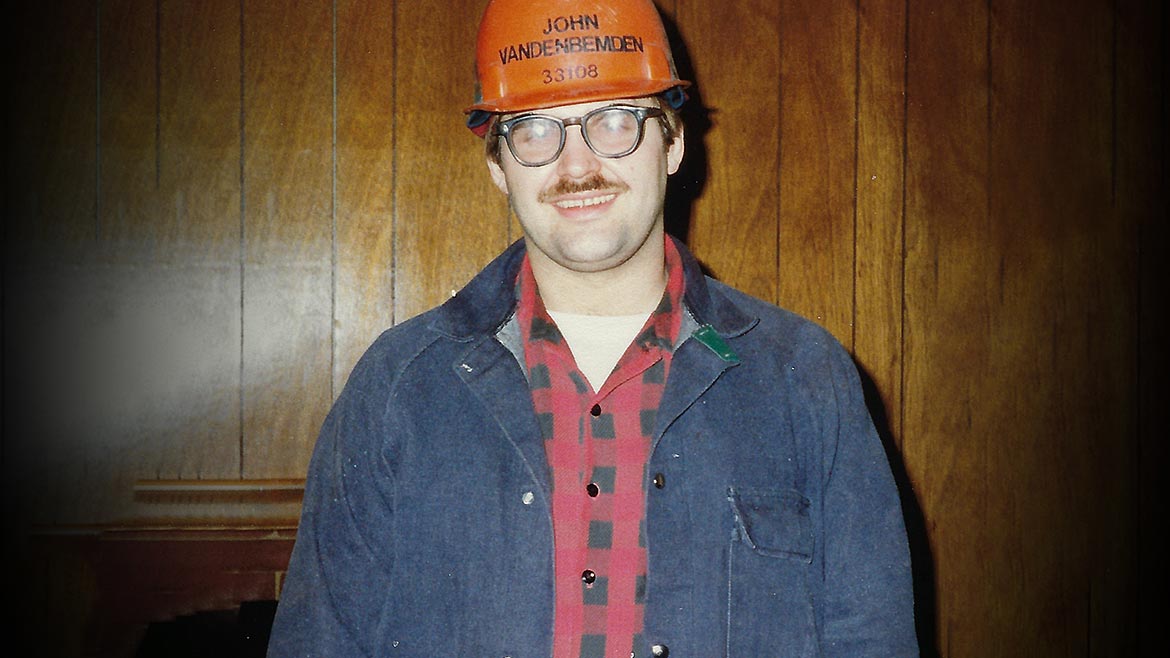 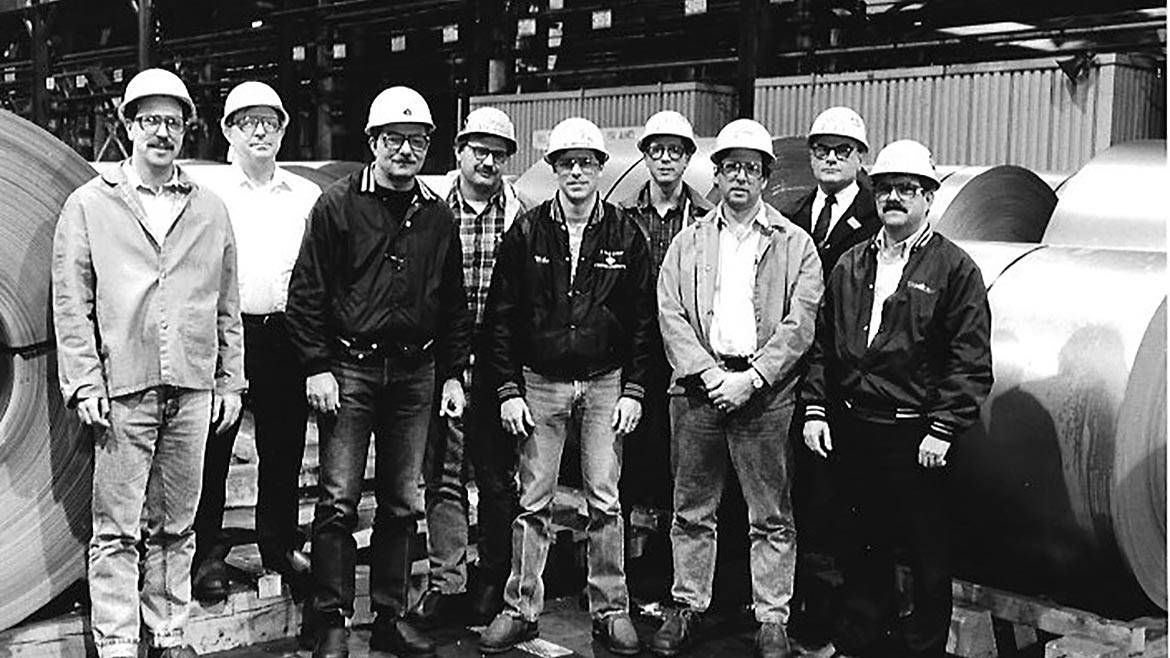 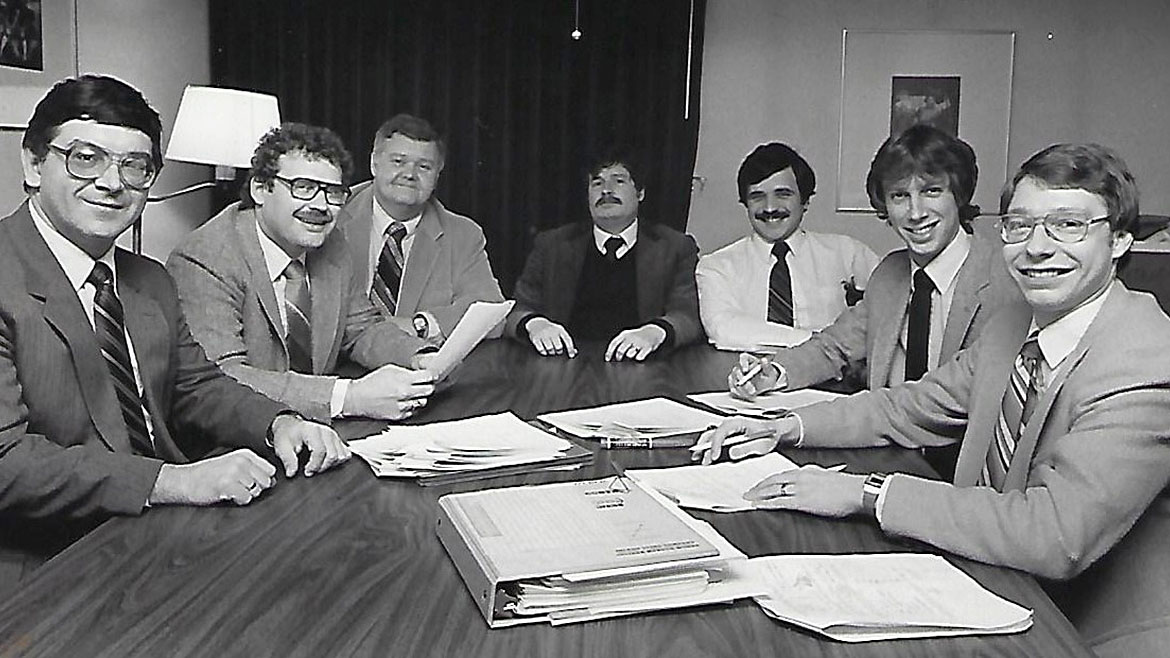 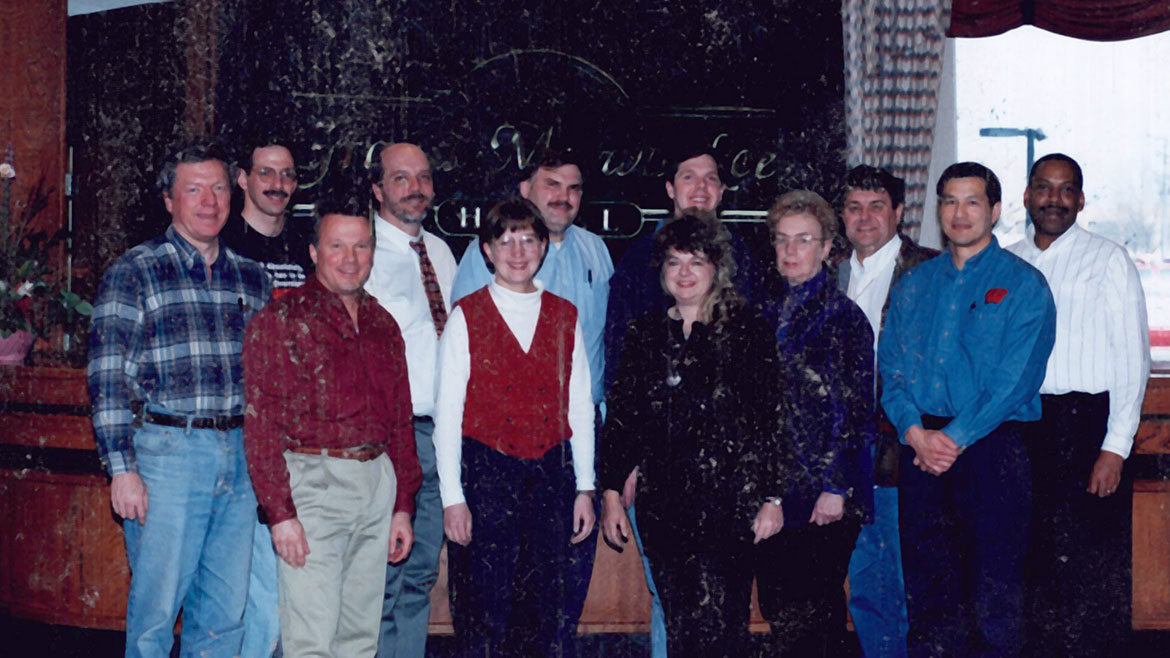 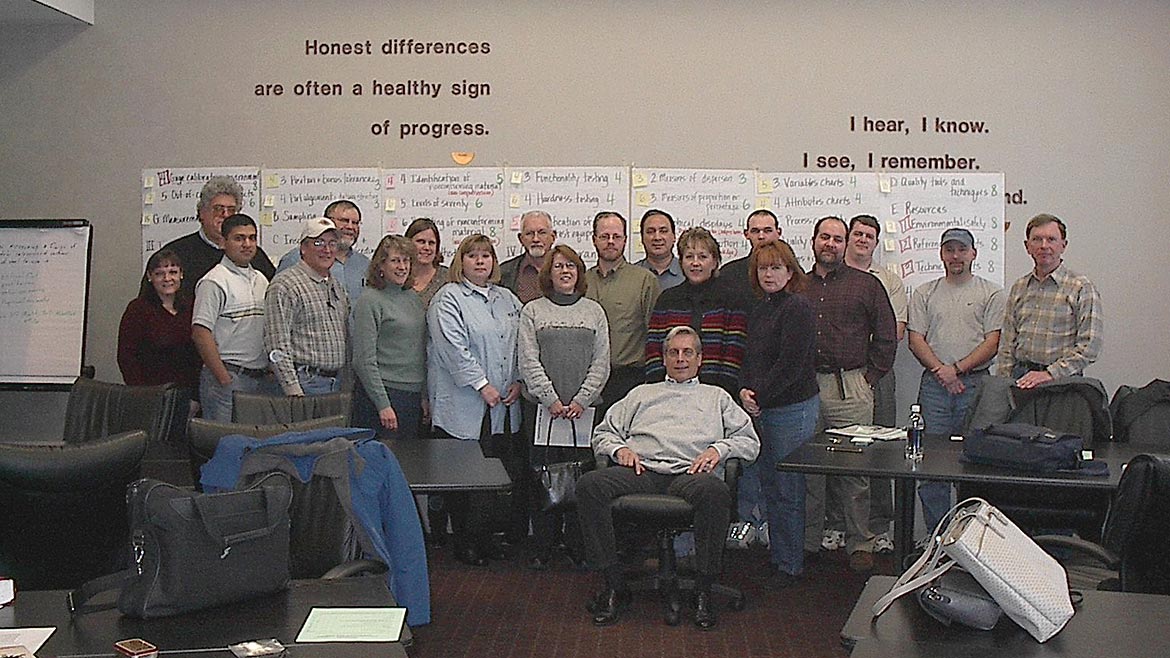 The quality guru started off teaching high school math. But after getting married—this month h and his wife will celebrate their 45th anniversary—he decided he needed to make some money. That led to a conversation with a friend and a job at Inland Steel. Though he never thought this would lead to a long-term new position, he worked there from 1977 to 1995. This lead to his first experiences in quality, as the quality revolution was getting started. He began to work on SPC and a range of other new quality ideas.

From there it was on to Gallatin Steel, Indalex, Daimler-Chrysler, First Vehicle Services, BQI, and Quality Auditing. Today he is the owner of Q-Met-Tech, a consulting, auditing and training company.

For those looking to advance their careers, he offers this advice:

“The main thing is never close your mind,” John says. “You can’t say you know everything. I know something. I always tell people, I know enough to be dangerous. Someone next to me might know more. In meetings, treat everyone as equals… Open yourself to new opportunities. I tried things that didn’t work, nobody’s infallible. The goal is to learn from it, and not repeating it if you can.”

Enjoying your work is also an important goal and John has found a way to make that happen.

“Really the joy in auditing is working with people to help them make their organizations better,” John says. He considers an audit to be a good conversation. Yes, there might be corrective actions, but this all contributes to their eventual success.

In his consulting career, he’s enjoyed tackling problems and helping change things for the better. If you can make some situation more bearable or reduce its impact on your job, that’s fulfilling work, John says, as it allows people to have control of their life and their time.


An Auditor In Demand

“Auditors come and go, for whatever reason, but John came in and he’s been with us ever since.”

When you hear the term auditor, it may bring up some anxiety. “A lot of auditors bring that around,” says Brown, “they’ll have you sweating while you are looking for things you may have missed. John is very friendly, though. He makes you feel at ease and is very knowledgeable.”

And his knowledge has helped their organization. Brown says John may come to a meeting and say, “‘I’ve seen it done this way before,’ and it turns out his suggestion was very impactful.”

John has worked in a lot of Aflac business units and people respond well to his style. “They’re always asking me, ‘Will John be back next year?’ Hopefully we have a few more years working with him.”

Brown describes John as “very professional but very outgoing. He’s a people person, he could strike up a conversation with anyone at any level. He doesn’t bring the stress and pressure of an audit. He has a wealth of knowledge; he’s worked in several different industries over the years, and gives you real life experiences.

“He’s a great business partner and we’re thankful to have him.”

Auditing Advice from our 2022 Quality Professional of the Year

John Vandenbemden explains how to get the most out of a quality audit, why not everyone can be an auditor, and how his work has changed since the pandemic.

While many quality professionals adhere to standards, John has been involved in writing them.

Working with John was easy, Spichiger says. Not only is he intelligent but he works hard, he says. “He’s committed and dedicated and puts in the work. That’s a guy I want to work for. He’s organized, he tells you what needs to be done, but gives you enough of a leash. That’s attracts other volunteers, seeing someone who is organized and committed makes you want to put the effort in.”

As a member of the ASQ Inspection Division, Spichiger says John helped the group turn things around. But to hear it from John, he just did what needed to be done.

Spichiger was the division chair two people behind him and says John left a strong legacy, including reestablishing the Inspection Division conference and bringing new energy to the group.

In addition, Spichiger says he’s proud of John for two things: the new national standard he helped lead, which was a years-long process and is available now: ASQ/ANSI ID1:2021 Inspection Techniques and Requirements – Guidelines. Though a team of experts were involved, “That was 90% John making that happen,” Spichiger says.

As Spichiger noted in his nomination, “The result of his work has been helping over 100 professionals achieve an ASQ certification.”

In addition, Spichiger said John is fun to be around. “He’s not a stick in the mud, not a fly on the wall,” Spichiger says. “You know he’s there.”


The World Of Standards

Working on international standards involves a lot of travel. Brenda Bishop, standards committee and TAG 69 chair, recalls meeting John in London. The other standards meetings took place in China, South Africa, Germany, and Japan as well as various locations in the United States.

During the London meeting, there was an English pub next to the hotel. Bishop was sitting at the bar waiting for her food to arrive when she ran into John and his wife. They invited her to join them for dinner and ended up having a pleasant meal together. In addition, it was a long walk from the hotel to the meeting site so they got a chance to talk then.

“He always looks on the positive bright side of things,” Bishop says. “I remember sitting in a meeting (during the ASQ transformation) taking notes on my computer. The division leaders were just heckling him as he was presenting. He was even keeled and just let things roll off.” 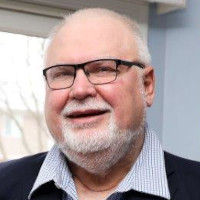 He is an ASQ Fellow, the recipient of ASQ’s Grant Medal, a certified Lean Six Sigma Master Black Belt and has extensive list of auditor credentials.

John is a voting member of TAG 69, ANSI Z1 and TC 176 Committees as well as the U.S. Expert for Acceptance Sampling for SC5 TAG69. John is the past chair of the ASQ Inspection Division and scholarship chair for the Cincinnati Section 900.

He has been a presenter, technical reviewer, and session manager at numerous ASQ World Conferences. John has also served as a Deputy Regional Director and on the ASQ Certification Board, PAR and TCC Nomination committees. John was a member of the ASQ Board of Directors and TCC National Directors 2017 & 2018.

Currently John serves as the Standards Chair for the Inspection Division.

In addition to his welcoming personality, John also is known for his intellect.

Frank Chapman took John’s Six Sigma class about twenty years ago and came away very impressed. “John was by far the most highly intelligent person I’ve ever met,” Chapman said. “He’s probably forgotten more than most of us have ever learned.”

Chapman, now director, Stratosphere Quality, stayed in touch after class and was able to hire him to do some work for his clients. “I always get awesome feedback,” Chapman says. “In the quality profession, he is definitely the guru. He is a bastion of information and wealth and experience.” Chapman also appreciated his dry sense of humor. He says John has good timing and can tell a joke with a straight face. But his appreciation goes beyond humor. Chapman says, “If I was in a life and death situation, I’d feel comfortable if he was the only resource I had.”

His communication skills have earned him a lot of admiration from other professionals.

“He knows how to give people feedback even if it’s negative,” says Ed Maschmeier, vice president, certification, SRI Quality System Registrar, where John has also provided contract services. “He knows how to communicate it in a way that doesn’t make people defensive and combative.”

If 20 people are in a room and someone is acting as if they are smarter than everyone else there, that doesn’t go over well. “John probably is but he never comes across like that,” Maschmeier says. “Being smart is a great attribute but it has to be put in play with a combination of a lot of other things. That’s what John has that other people don’t.”