Meet Kathy Lyall, our 2020 Quality Professional of the Year

The problem would go away only to return every few months. The manufacturing mystery continued for about seven months, with each failure costing $26 in raw material alone. Eventually it was discovered that the issue started with a supplier who was not getting the material to the required spec. Large lots of Swiss turned aluminum bar stock were involved, and the problem resurfaced every time there was a bad lot.

Through the use of statistics, Kathy Lyall was able to trace the problem back to the source, which ended up being a combination of diameter and surface finish issues. This was years ago, but she still remembers cracking the case.

In other words, problems don’t stand a chance with Lyall on the scene. Her mentor and former colleague Greg Gay said it best: “Wherever Kathy goes, things improve.”

For her work as a problem-solver, leader, mentor and volunteer, Kathy Lyall, quality director at RTI Surgical in Marquette, MI, is our 2020 Quality Professional of the Year.

From a young age, Lyall was always interested in spending time in the garage with her dad and figuring out how things worked. He let her help service and repair the family’s snowmobiles. She wanted to understand why something was broken and how to fix it.

Her journey into quality began with a minor in quality assurance during her undergraduate degree. Two professors sparked her interest in quality.

David Lyth, PhD, Lyall’s grad school advisor, was one of these professors. “I’m proud to say she was my student,” Lyth said.

He taught her during her master’s program and still remembers an Excel-based assignment on statistical process control and lot-by-lot sampling. “She came up with solutions to the problems that I hadn’t thought of,” Lyth says.

Problem-solving is one of her specialties. Using statistics to predict and prevent problems was an appealing element of the quality field. “I really like the prospect of predicting problems before they occurred so you could mitigate them so they wouldn’t affect customers,” Lyall says.

Quality was always the more inspiring element of manufacturing to her. In her early career, she had a combination role working in purchasing and supplier quality. The purchasing side—figuring out why a vendor had not been paid or entering purchase orders—was not her favorite. But she loved the quality side, “using the quality tools to solve problems at my plant or take knowledge to suppliers.” 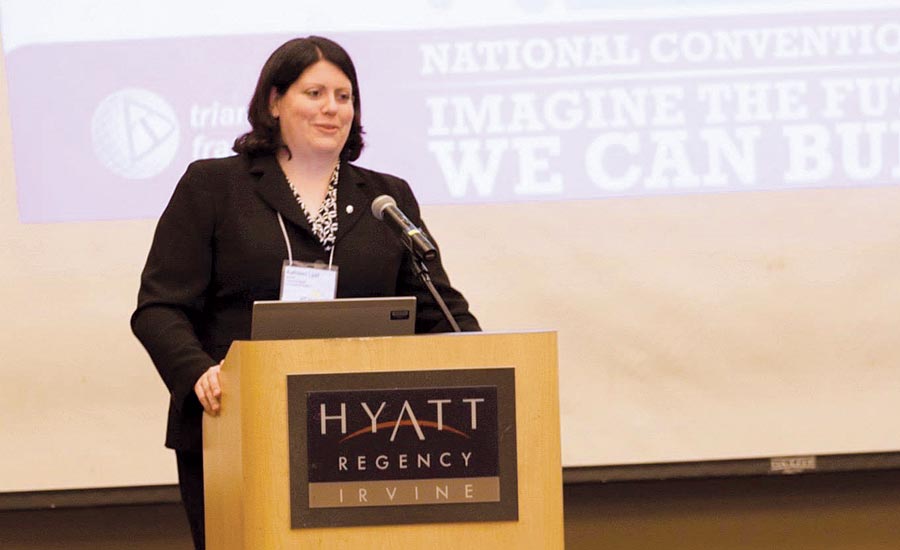 Kathy has received the following professional recognition: Pyramid Builder Award and the Lifetime Achievement Award from Phi Sigma Rho (an engineering sorority); the Quality Leader of the Year from Stryker Corp., Global Quality and Operations; and is an ASQ Fellow.

She has been very active in giving back, especially through volunteer service with ASQ and Phi Sigma Rho on a national level. She served three two-year terms as the National Council President for the sorority and for the past seven years has served ASQ at both local and national levels. She has been an ASQ Section Chair, a deputy Regional Director, has volunteered with the ASQ Inspection Division and Chairs the ASQ Hromi Medal (there are only 12 medal committees). In addition, she served as a mentor to women engineers attending Western Michigan University over a six year period.

She has spoken at ASQ’s World Conference on Quality and Improvement five times over the past six years and will do so again in 2020.

Her career has taken her through the medical device industry, consumer goods, and automotive, working at companies such as Whirlpool, Stryker, Eaton, and Bosch.

While at Eaton, she met Greg Gay, who sparked her interest in the prestigious ASQ Fellow program.

“Greg definitely planted the seed. At the time, I met less than half of the requirements to become a Fellow. Nonetheless, Greg insisted I should make Fellow a goal, and start chipping away at it,” Lyall said. “I always like to have a ‘BHAG’ – big hairy audacious goal. Something that seems impossible when you first commit to it, then you break it down into manageable pieces, make a plan, and execute the plan, all in an effort to accomplish the outrageous goal. I do my best work when I have a big goal (BHAG) to chase. This is definitely one of the secrets of my success.”

Over the course of seven years, she worked on gaining enough experience and skills for the Fellow application. Though Lyall was confident about her chances, Gay tried to manage her expectations by saying that she could always reapply later if she didn’t get it and reminding her that she was still early in her career. The world conference was held that year in Milwaukee.

Lyall responded, “Oh no, Greg. I am going to Milwaukee and I’m picking up my Fellow pin.”

And she did. While most people typically become ASQ Fellows in their late 50s, Lyall was able to become a Fellow at age 40. Only about one-sixth of the applications are accepted.

Gay and Lyall now volunteer together in the ASQ Inspection Division, which is where she met Jim Spichiger, who nominated her for the Professional of the Year award.

Finding people to write letters of support for Lyall was not difficult. According to Spichiger, people jumped at the chance to help. Her boss, coworker, direct report, previous colleague, fellow volunteers and engineering sorority members all wrote letters of support.

Elana Chapman, a fellow volunteer with Phi Sigma Rho, an engineering sorority, met Lyall about twenty years ago. She still remembers when the two of them were officers in the sorority and set a big goal for the group.

“This was the first BHAG!” Lyall says. “We set the crazy goal of growing our engineering sorority from four chapters to 20, in time for the organization’s 20th anniversary. We had five years to do it. We surpassed our own expectations when we did it in four! That’s when I realized how much more effective and productive a team or individual can be when focused and rallied around a massive goal. I also realized the power of making the BHAG known to others. People came out of the woodwork to help us achieve our audacious goal!”

In addition to her professional skills, Chapman said Lyall is a good listener and friend.

“She’s a very thoughtful person,” Chapman says. “If you tell her something that’s important and personal, she remembers that.”

At RTI Surgical, Lyall and her team improved quality by:

“We are very fortunate to have Kathy as part of the team,” Speagle says. “She tends to be clear and concise, and keep things calm but urgent at the same time. Everything needs to be done quickly, especially with quality systems or regulations, so having that clear mindset with urgency is paramount.”

In previous jobs, Speagle has worked in quality so he knows the importance of the work. With certain quality issues, Speagle says that a problem seems black and white. An operator did something wrong and should be reprimanded. But that’s not the right way to think about it, he says. “There’s always a fundamental reason something was done incorrectly. One of the places where Kathy shines is being analytical and asking, ‘Was it a training issue? A specification issue?’”

“That’s how we looked at our nonconformance process,” Speagle says. “We went away from the idea that something was wrong.”

This involves collecting information, working with the team and being open about finding a better way to do things. “That’s her strength,” says Speagle, noting that the team has responded well to this approach, which has nothing to do with blame.

Lyall’s leadership skills are appreciated by her staff at RTI, including quality manager Jesse Nye. In his letter of recommendation, Nye wrote, “One of the most comforting things as a quality manager is to know that I can talk to her about any issue and that she is always willing to listen and provide constructive feedback. There has not been a problem to date that I was not able to solve with her help and guidance.”

“She has a welcoming and positive character but at the same time can provide direct and candid feedback without offending people. Her knowledge of quality tools is remarkable and goes beyond her numerous certifications. Lastly, Kathy is good at saying thank you and recognizing people for their efforts and accomplishments, which only further motivates people.”

It seems the quality field could really use more people like Kathy Lyall.

“She really stood out as a candidate,” says Spichiger. “Finding someone as deserving as her in the future will be tough.” Q

Meet Katherine Cox, our 2017 Quality Professional of the Year.

Meet Our Professional of the Year