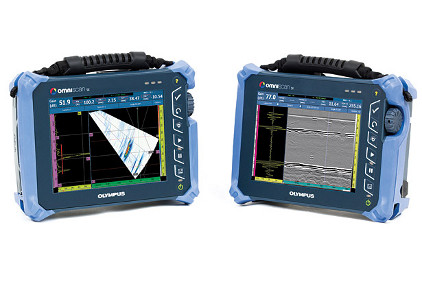 Olympus introduced the newest member of the OmniScan® family of flaw detectors, the OmniScan SX. It features an easy-to-read 8.4” touch screen for displaying its user-friendly and streamlined soft-ware interface. The single group OmniScan SX provides a cost-effective solution for linear zero-degree inspections, such as corrosion mapping and composite inspection, as well as weld inspection using one phased array group or one TOFD channel. Compared to its successful predecessor, the OmniScan MX2, the OmniScan SX is 33% lighter and 50% smaller—offering an unprecedented level of portability for an OmniScan.

The OmniScan SX comes in two models: the SX PA and SX UT. The SX PA is a 16:64PR phased array unit, which, like the UT-only SX UT, is equipped with a conventional UT channel for pulse-echo, pitch-catch or time-of-flight diffraction (TOFD) inspection techniques.