Today’s smart grid relies on equipment called phasor measurement units (PMUs) to deliver real-time, mission critical data on the voltage, current, frequency, and phase within the distribution smart grid. For the Smart Grid system to work reliably, PMUs must be calibrated so that their data is consistent, accurate, and credible, and so that models from different manufacturers are inter-operable. NIST, The National Institute of Standards and Technology, felt so strongly about the need for a PMU calibrator that it awarded Fluke a development grant in 2010 to get the project underway. The resulting Fluke Calibration 6135A/PMUCAL Phasor Measurement Unit Calibration System is the only automated and traceable PMU calibration system available today. It fills an essential need for PMU designers and manufacturers, as well national metrology institutes, third party calibration houses, and electrical utilities. 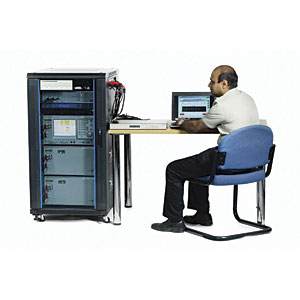 The 6135A/PMUCAL is an integrated system of six components that completes the approximately 600 tests that certify a PMU configuration meets the latest performance standards of the IEEE Standard for Synchrophasor Measurements for Power Systems (IEEE C37.118.1:2011 and IEEE C37.242). The system completes the tests in 6 to 12 hours, versus two-to-six weeks with manual test methods. And because it’s an automated system, even non-experts can start using it quickly to perform a complete complement of required tests.

The system, which is mounted in a 19-inch rack with an integrated test connection panel, includes a server PC, GPS receiver, system timing unit, and three-phase 6135A Electrical Power Standard. It also includes calibration software that allows users to create and store personality profiles for the PMUs tested frequently, as well as run full certification tests and a wide range of automated and interactive tests.

The test system architecture allows a user-provided client PC to access the test system over the Internet from anywhere in the world. System accuracy yields a test accuracy ratio of 10:1 against the 118.1 PMU specifications.

Calipers 102: The Basics and Beyond

What Should Analytics Add to a QMS Solution?

This webinar will explore the costs and inefficiencies around paper processes and introduce Digital Clipboard for automating process workflows and improving productivity, increasing data integrity, accelerating reporting and corrective action, as well improving traceability and training.

The Quality Show is a 3-day tradeshow dedicated to connecting quality manufacturing professionals with process improvement vendors for all things QUALITY.