Once limited to the lab, CMMs are finding a home in harsh manufacturing environments.

For years, traditional thinking was that CMMs belonged in a lab. While in many cases that’s still necessary, many machines work quickly and accurately on the shop floor, offering multiple measurement applications in environments varying in both cleanliness and temperature. With affordable robotic arms, many shop floor CMMs are even used for automated in-line process checks as well, explains Dylan Coutelle, technical sales engineer for Carl Zeiss Industrial Metrology.

“We’ve seen some of these [CMMs] go in some awful environments, but they perform very well,” Coutelle says.

More manufacturers are looking for shop floor solutions to save time. “Pulling parts off of the production process, to get them to an inspection lab—while I think there will always be a place for that in manufacturing—there are shortcuts you can take to possibly bring the CMM out to the production cell,” he adds. “So we have a lot of customers there who are building these small production cells. They may have their mill, their lathe, and their parts washer. And then, on top of that, they will have a [Zeiss] Duramax sitting there as well. So they’re able to incorporate that inspection process right into their production process.” 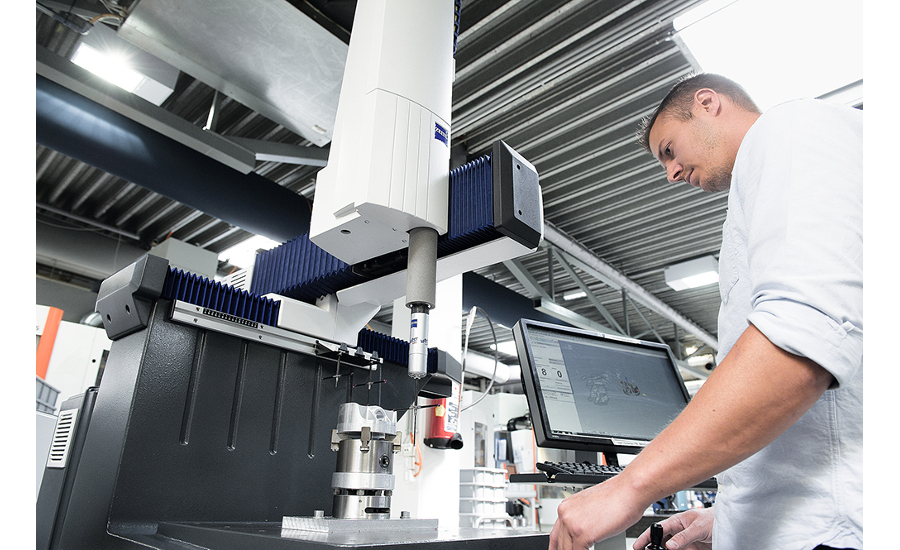 For years, traditional thinking was that CMMs belonged in a lab. Photos courtesy of Zeiss.

CMMs, as robust as they are, are still delicate measuring machines. So while temperature and cleanliness are easily controlled in a lab setting, the shop floor presents special hazards.

Temperature compensation helps CMMs adjust for environments that stray away from the 20°C (68°F) mandated in measurement labs. But a shop floor machine that can accommodate anything from 18 to 40°C still must contend with the gradient of temperature change, or how quickly it changes over time. Modern, shop-floor CMMs can be programmed to allow for a certain amount of temperature change per hour.

There is limited room in a production cell. So it’s important to select a machine that has the smallest footprint, and the most open loading room for robotic arms to maneuver through the measuring volume.

With four-sided loading, the probe can be docked in one corner, giving the robotic arm, or human operator, multiple angles of access.

In shops with heavy machinery shaking the floor, especially shops with presses, it’s important for inspection equipment like CMMs to offer dampening systems to protect against vibrations or other disruptions resonating throughout the floor.

“If you were able to monitor the movement of a shop floor, it’s a mad house in there,” he says.

For shops where a large press would create shaking that would overwhelm even the best dampening systems, Coutelle says he’s seen CMMs installed on their own block of concrete, isolated from the rest of the shop’s floor. The rest of the ground shakes, but the machine doesn’t feel it—it’s on a totally separate piece of concrete.

CMMs, as robust as they are, are still delicate measuring machines. So while temperature and cleanliness are easily controlled in a lab setting, the shop floor presents special hazards. Photos courtesy of Zeiss.

At The Quality Show in Chicago this fall, Zeiss demonstrated a shop floor Duramax CMM working in tandem with a Universal Robots robotic arm. As robotics come down in price, it’s becoming a new option for smaller manufacturers who previously wouldn’t consider the possibility.

Coutelle says if we’re talking automation, inspection can be truly inline—the CMM sits next to the lathe or mill, and is treated just like any other production machine. Or it can mean an inspection cell, where parts are diverted from the line and sent to an inspection cell nearby.

He has seen manufacturers use shop floor CMMs to inspect everything from simple automotive components, to gears and blades and devices from medical companies. Bringing the machine to the shop floor can also provide inspection through the entire production process.

One example could be the process life of a ring gear. “It comes off as a hot forged object, and they can inspect it then,” Coutelle explains. “You could put a CMM right next to the shipping door as these are coming in. You could pull a sample off, and you could measure it then. Then you could have the blank cut, and bring it back to the CMM, and you could inspect just the few diameters and heights that have been cut. Then all the way through the process of actually cutting the teeth into the ring gear, we could do a final inspection there.”

Depending on the project, the CMM could work at a frequency fast enough to keep pace with production, performing 100% inspection or inspecting a smaller sample size for a larger scale operation.

What’s Next for Shop Floor CMMs?

Coutelle expects the use of shop floor CMMs to continue to spread from the domain of the biggest players to small businesses.

“Right now, it’s the big companies,” he says. “You go in and you expect to see that they’ve put the investment into the automation processes. But we still go into the mom and pop shops and there’s still people loading the CMMs. Whereas I think it’s becoming more affordable now for those smaller shops to look into ‘How can they cut a few percentage points off of their inspection process by automating it?’”