This website requires certain cookies to work and uses other cookies to help you have the best experience. By visiting this website, certain cookies have already been set, which you may delete and block. By closing this message or continuing to use our site, you agree to the use of cookies. Visit our updated privacy and cookie policy to learn more.
Home » Quality’s 19th Annual Spending Survey takes a closer look at what quality professionals will be buying this year.
Management

If you’re curious about what the plant down the road is buying, we have some answers for you. And if you’re wondering what types of equipment are popular right now, we’ve looked into that as well. In our 19th Annual Spending Survey, we also looked to identify the change in your approach to quality today as compared to a year ago, the spending on quality equipment and services overall, and the change in the budget within categories.

Clear Seas Research, in conjunction with Quality, conducted the study to provide information about spending for capital equipment, software and services.

Since the projected budget and actual may not align, Quality also looked into your plant’s actual spending for quality assurance and control equipment, systems, software and services as compared to the projected amount.

Before we get into the budget, let’s take a closer look at what goes on at your location. As in years past, assembly remains the top manufacturing operation performed at respondents’ locations (59%). This was followed by machining at 47% (a new response option added this year) and welding (42%). Additional options were added this year including soldering (28%), brazing (17%), sintering (7%), and additive manufacturing/3D printing (21%).

Two-thirds of respondents report that their company employs fewer than 250 employees at that location. The mean number of employees at each location was 405.

There are a variety of products produced at these locations, including fabricated metal products; aerospace products and parts; and electrical equipment, appliance and component manufacturing. 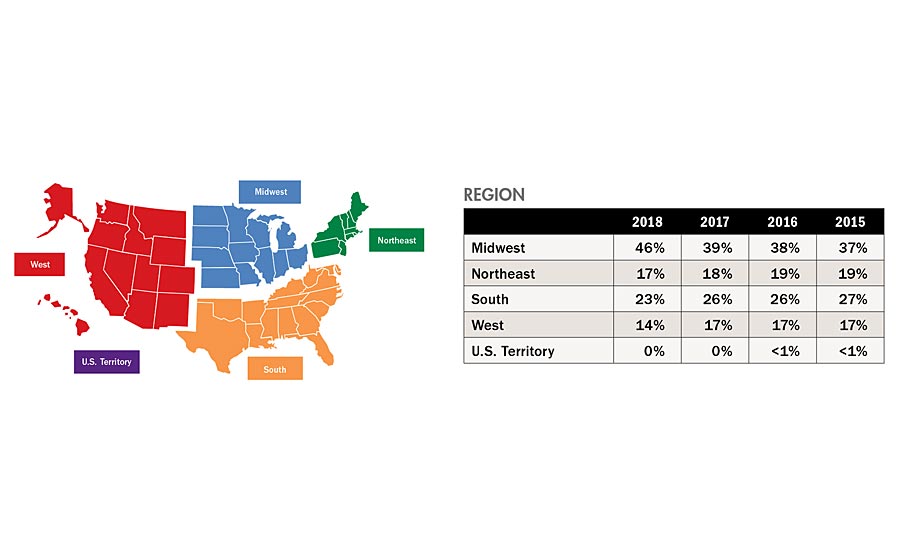 The specific job function this year was more evenly divided among quality management (17%), manufacturing management/operations (17%) and manufacturing engineering (14%) than in years past.

More than three-quarters of respondents said they are at least somewhat familiar with their company’s fiscal year 2019 budget. 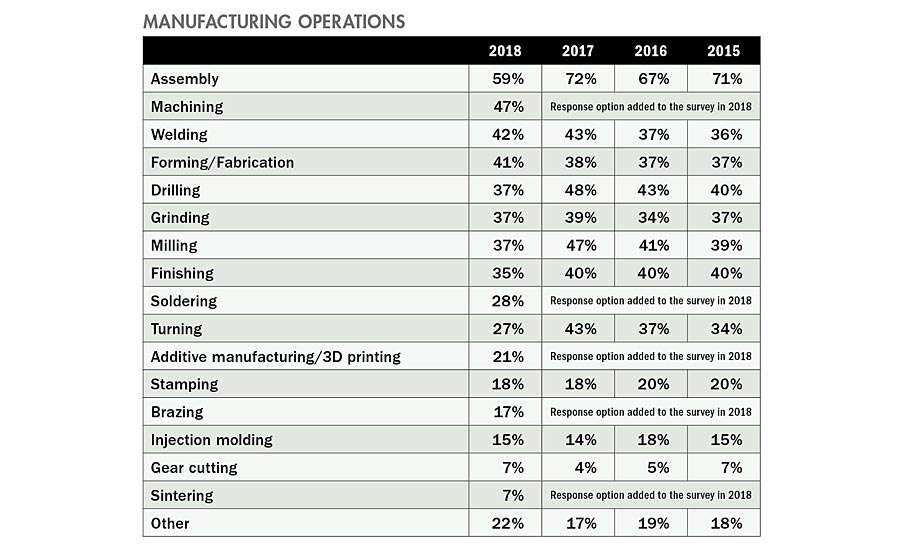 In some ways, no matter how carefully you plan, budgeting means guessing. But for nearly two-thirds of respondents, their planning was accurate. This group reported that their actual fiscal year 2017 spending in quality-related purchases was in line with projections. A quarter reported spending more, by 31%, on average. Another 12% said they were under budget, by an average of 15%.

About two-thirds of respondents estimate that fiscal year 2018 spending on quality-related purchases will be in line with projections. A quarter anticipate going over budget, by 28%, on average. For the 8% who anticipated being under budget, they estimated this would be about 22% under.

And when will all this spending take place? For the majority, it’s already happening. Fifty-eight percent of respondents expect their plant to make its first quality-related purchase in the first quarter of 2019, while a fifth expect to start spending in the second quarter.

What are the reasons for increasing quality-related investments? Improving productivity, increasing production capacity, and reducing scrap and rework remain the top three motives. Reducing costs and replacing old or worn-out equipment (a new response option added this year) rounded out the top five. 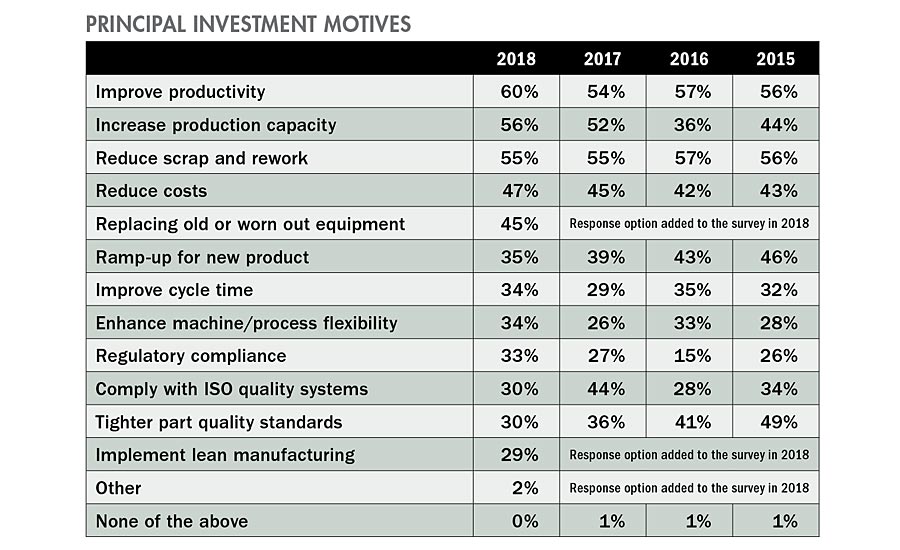 Let’s take a closer look into these equipment categories.

Gages and gaging systems aren’t expected to see any budget changes from fiscal year 2018 to fiscal 2019. Sixty-seven percent of respondents reported fiscal 2019 budgets of under $60,000 in this category. Though the majority expect category spending to remain consistent next year, 21% expect an increase. 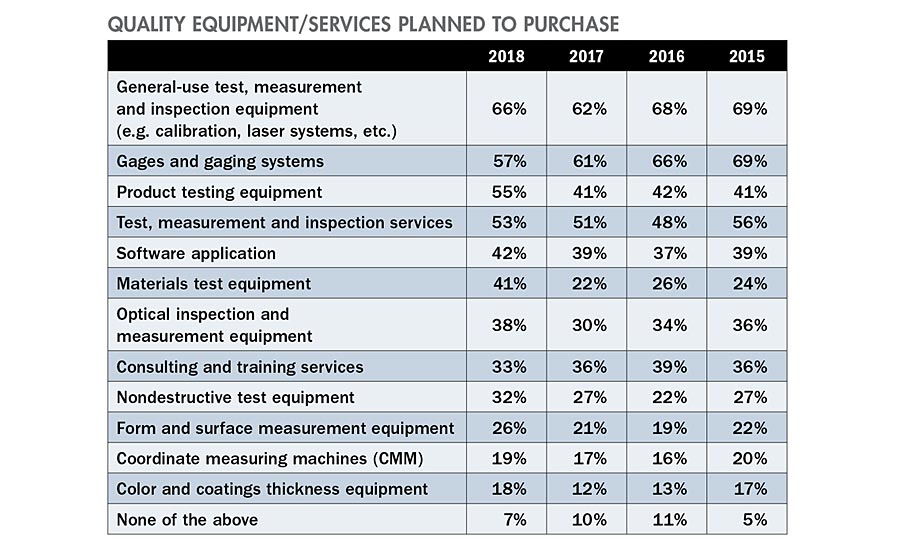 Almost 30% of respondents’ fiscal 2019 gages and gaging systems budget is expected to be spent on handheld measuring tools. Next, 15% is allocated to fixture and special tooling gages, on average. The remaining budget is expected to be spread across a range of products: plug and ring gages, thickness gages, thread gages, depth gages, bore gages, turnkey and in-process gaging systems, air gages, fixed limit gages, snap gages, gear and spline measurement, and ball gages.

While the majority of respondents expect fiscal 2019 budget for optical inspection and measurement equipment to remain consistent with current year, 27% expect an increase next year.

Budget for optical inspection and measurement equipment is expected to be fairly spread across five of the seven listed sub-categories, including machine vision systems, microscopes, video measurement systems, sensors and optical comparators. Borescopes and videoscopes rounded out the category at 5% each.

Half of respondents expect next year’s investment in color and coatings thickness equipment to be less than $20,000, on par with this year’s reported investment.

On average, over a third of product testing equipment budgets for fiscal 2019 are expected to be spent on environmental test equipment (36%), representing a slight upward trend since the 21% cited in 2015.

Half of respondents expect fiscal 2019 spending on materials test equipment to be less than $40,000. Though the majority of respondents do not expect any change in spending year-over-year, a quarter expect an increase.

Chemical analysis/spectroscopy, hardness testing, universal testing machines, and tensile testing are expected to be the priorities within the material test equipment budget next year, with each likely to get a tenth share or more of the category’s budget.

In terms of general-use test, measurement and inspection equipment, data collection devices saw a surge this year, up to 29% from 18%. As the importance of data continues to be drilled home, this seems likely to continue its upward trend.

Software brings many different choices—how the quality field has changed—and for fiscal year 2019 data collection (14%) and calibration (13%) are the top categories for software applications, with the remainder split among a wide variety of applications.

Nearly half of next year’s consulting and training services budget is expected to be spent on certification/registration, quality management, and process improvement, with each expected to get 15% or more of the category budget. The certification budget is down to 18% this time after the 39% of last year. The September 2018 ISO 9001 deadline would seem to be a likely explanation.

Calibration touches many aspects of quality, whether it’s equipment, software or services. In terms of calibration services and lab testing, this category is expected to receive similar shares of fiscal 2019 budget, roughly one-quarter each. Previously, calibration services commanded a 50% share of expected budgets.

There were some changes in this year’s methodology to improve data accuracy. First, we did not weight responses to region. In asking about next year’s fiscal budget, ranges are included for all years in the report, which reflects the data more accurately. Instead of a common range presented in previous years’ reports, for all equipment services budget category data, ranges are asked specific to each category and presented for all years in this report. Finally, more response options were added for several categories.

The survey was fielded October 31 to November 15, 2018. The web-based survey was sent to a systematic random sample from the domestic circulation (on an Nth name basis). A $5 gift card was sent to all who qualified and completed the survey and a drawing for one $100 gift card to all who attempted the survey. We received 301 useable returns, for a response rate of 1.42%.

Thank you to all those who participated in this year’s survey. The information is this report comes from the Clear Seas Research 2018 Spending Survey, December 2018. The full report can be purchased at clearseasresearch.com/product/2018-capital-expenditure-study-quality/?r=10 Q

2022 Quality Leadership Ranking: When the Going Gets Tough