The Value of One Software for Several Types of Inspection Systems

A common software for multiple instruments, often from multiple OEMs, is ideal.

Until recently, most consumer electronics from different companies were designed to be incompatible with one another. This has led to the average person realizing, to varying degrees, that they live in an Apple, Google, or Amazon-dominated household.

By contrast, manufacturing facilities that have been around for years or even generations tend to utilize equipment from multiple different OEMs. The problem with this setup though, particularly in metrology applications, is when different instruments run on different software.

According to Lowen, a common software confers many benefits to the end-user.

Non-ZEISS Direct Interfaces (NZDIs) are direct connections to a system’s existing controllers. This means that there is no need to remove an existing software, part program, or computer from a setup that already works for the end-user.

Instead, CALYPSO software can be installed in parallel with an existing setup, with no hardware retrofits, alterations, or disruptions to that machine. Two software packages can run on the same machine, and the end-user can switch between CALYPSO and existing software. CALYPSO also will read the same calibration data as the OEM software, so no additional calibration is required.

As an alternative to the NZDI method, ZEISS can add CALYSO to a non-ZEISS CMM using the I++DME specification. “That’s a standard that is put in place to allow connectivity of a metrology software to a CMM controller,” says Lowen. This means that a client and server relationship can be used to communicate information between a CMM and CALYPSO. The non-ZEISS CMM can connect to a I++DME Server and ZEISS can provide CALYPSO with a I++ DME client.

Another but certainly more limiting option is to do a hardware retrofit. “That’s where the software company can’t connect to their controller, so they’ll retrofit it with a different controller,” Lowen explains. The biggest limitation for customers post-retrofit, however, is how they are then prevented from using past software and programs.

“The biggest hassle there is that turnover period of going from old to new,” says Lowen. Performing hardware retrofit is akin to switching off a light. “You plan a certain day to end the old workload and start anew, which for a lot of companies under a lot of pressure is challenging.”

A customer may already have programs written in the old software and they may still continue running those, but for the most part, “they want a flexible plan on how to migrate to a new product,” Lowen attests. “And if you have a software that allows a simple software connection to the machine, it allows the user to operate either software at the same time—the older software, so they can continue running legacy programs, and the new software, and be able switch back and forth between them.”

In the last couple of years, Lowen has noticed an emerging trend of individuals on the shop floor with multiple tasks. “About 10 or 15 years ago, one person would be dedicated to operate a CMM,” he recalls. These individuals would attend a CMM training class, learn software like CALYPSO, go back to work, and spend about 40 hours a week operating and utilizing that CMM.

The trend now—though it seems to be more prevalent at smaller shops than at large organizations, Lowen observes—is for the younger generation to be asked to run an entire machining center, or to be deeply involved in quality control and statistics software. Their roles have expanded with multiple job functions at a company, Lowen says, which makes it even more important for software to not just be “user-friendly” but also to have a strong infrastructure of service and support. This can range from having easy access to application engineers over the phone who can answer questions to e-learning and YouTube videos to the option of onsite support.

“What’s that support structure offering to the user?” Lowen asks. “User-friendly is the standard. I think the differentiators now are more related to the support infrastructure that the software company is providing.”

A common software also can reduce the overall workflow to the quality department, “so they’re not having to rewrite a new inspection plan for one device just because they changed their metrology application,” says Lowen. For instance, “if they wrote a measurement plan for the CMM and then for whatever reasons determined they could do it better on a vision machine,” they could simply move the plan from one instrument to another using a common software, without having to rewrite the program.

For Lowen, a typical customer has multiple machines that they have acquired over time. Perhaps the person who worked on a non-ZEISS machine has retired, and now they’re asking the quality engineer who used to just work on a ZEISS machine to write measurement plans or programs for both machines. In this case, they want to know if they can just use CALYPSO on both machines. 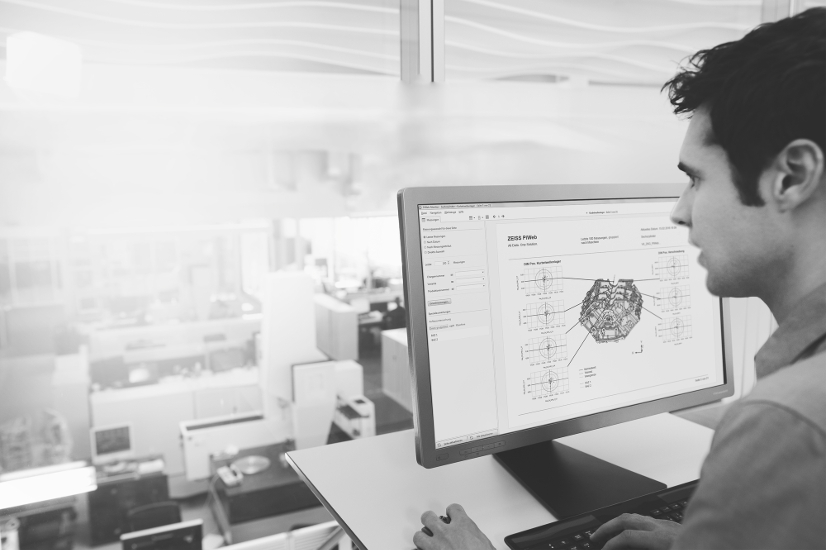 “Those are the typical reasons people come to us for a common software,” Lowen says, “and also because they want to commonize reports.”

In the manufacturing world, a CMM report will go out to dozens of different people, “and when you start sending reports from two different machines,” Lowen says, “that’s twice the work” for the company to sift through. Instead, “they want the reports to have the same look and feel to them, because they go out to everyone in the company.” Moreover, streamlined reports contribute to a more streamlined process.