Have you had a chance to see the film “Tomorrowland”? It’s a fun glimpse into the future and in many ways we are already there. The story includes a bunch of kids ready to see things very differently when they travel into the future and guess what, modular fixturing appears in the last few minutes of the film featuring a current automotive design studio. The camera pans over a clay model under a milling machine or CMM with a measuring system and sculpting head and the room is filled with modular fixturing for small scale model making in clay by artists and sculptors. These are called armatures (a metal framework on which a sculpture is molded with clay or similar material).

Over the decades, clay modeling for automotive model making has been the choice worldwide to bring all types of art and concepts to life. This utilizes a fixture or armature. In the automotive world of vehicle design these are used to model half-scale to full-scale models for appearance, test and development. Usually, these concepts are derived from a team of artists that first design in CAD, or in the old days on miles of paper taped to the drawing boards in the studio. The CAD files for the model are loaded into a CMM type of machine and the cutting head gets to work based on the program after many changes and approvals. Some final sculpting is then possible by hand.

From small scale to full scale all models are built on a structure known as an armature. Remember the human flexible “dolls” used in art class made of wire or wood and could conform to your liking for the sculpture? Well, the same is true in modeling automotive vehicles. The only difference is that the armature or structure underneath the clay has evolved not only to hold the form but to tilt, transport, raise and level. In the past the platforms or base for these models were simple flat tables, sometimes just the floor with a riser to lift the clay for easy access.

The smaller models are on ergonomic height mobile tables for hand sculpting with dimensional guides (scales) affixed to the perimeter so the sculptor has some idea of the size and scale. Some concepts are sculpted on a small grid table with and special convex mirror that will allow the sculptor to work on a “half vehicle” model. The mirror image shows the full design. Not such an issue for the table top size models but a really tricky process for today’s full size cars, trucks and nearly anything that is designed and modeled in clay.

Once a full scale model is laid up with the substrate made up of other materials like wood, foam and the thick layer of clay the weight becomes an issue for mobility. Transferring the armature loaded with the substrate and clay is now ready for the milling machines. The modular fixturing systems offer a variety of configurations for interiors and exteriors and a precise grid has eased the process of in process measurement. Most systems are designed in metric conforming to multiple sister studios around the globe. Different markets like different designs so it’s necessary to create and present many ideas before the lucky winner gets to full production. 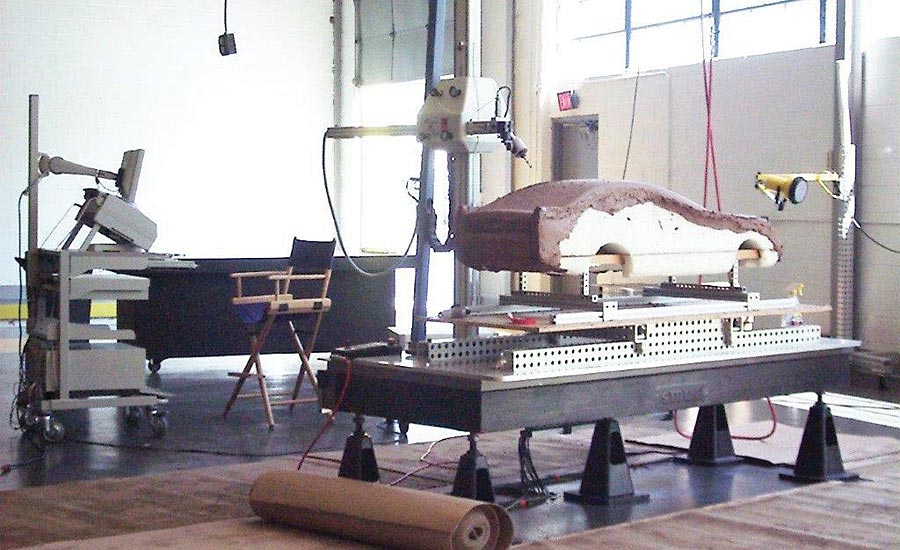 The modular fixturing systems offer a variety of configurations for interiors and exteriors.

Virtual reality has had its place in this process but the tried and true clay model is still job one. You can’t really sit in a hologram to simulate your reach for the glove box or plug in your cell phone…you get the idea. Every designer I have met has a special relationship with their vehicle model. You have to touch it and see it in daylight, at night, and get behind the wheel. Some models make it to the wind tunnel after a shiny covering of silver metallic material covering the clay. Not will all get that opportunity. It’s a long process and many of the designs are for the next model year, say two years or more down the road, no pun intended.

GM had a vision to update all of their many modeling tools. First, they considered a rework and update of their existing full scale modeling “tables” or armatures. After checking into cost and weighing the benefits of a full update using modular tooling they moved forward on a lightweight aluminum structure that could be utilized in nearly any configuration and the best feature was reusability. In their situation they keep their models for a period of time and often just make a few changes aka a “facelift” for a front or rear design change. This saved them time and money.

Later, the idea was offered to “auto level” a full body armature that could be presented to automated sculpting by clay modeling machines. These are usually a horizontal arm CMM system with a programmable measuring head and cutting head to do the work of hand sculpting. The programing is digitized and the program for the modeling gets to work. In the past, this was all done by hand and took forever!

Just think, if in the 1950’s, Edsel Ford had this technology in his toolbox he probably could have erased that huge mistake way before the production started. Not everyone gets to be famous for the good things they do. Oh well, back to the drawing board. Today we plan on some of the sexiest vehicles yet with all of the technology of tomorrow in service today. Vroom, a Corvette that really flies! 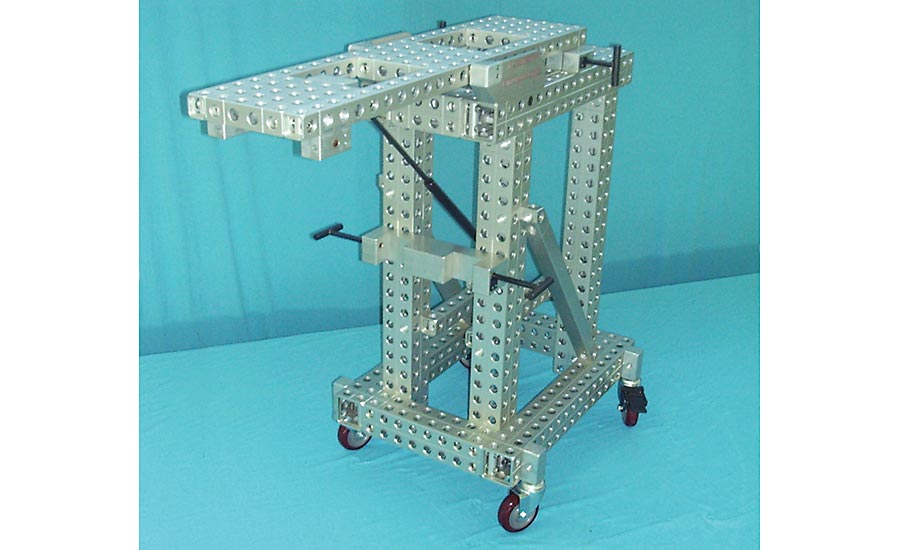 Heck with all of the new AI (artificial intelligence) and LiDAR (light+radar, a detection system which works on the principal of radar, but uses light from a laser). The next gen solid-state technology adopted by the automotive industry for the new self-driven passenger cars in the making we will have a myriad of designs to choose from. Emerging autonomous vehicle manufacturing companies have joined forces with premier automakers worldwide in designing new vehicles utilizing modular fixturing, too. No longer will the gas guzzling combustion power house system drive the vehicle. It has freed up many of the components making space for a bank of batteries so new designs are critical. Not only the “skins” or unibody framework are taking shape but the underbody is all new (remember the “hump” in Grandpa’s Packard?). It’s a whole new venture to get rid of exhaust systems and more on the revolutionary designs for electric vehicles. Fixturing is necessary and happening in all facets of new vehicle design,  including the manufacturing process.

I recently spoke to a senior industrial designer who has made the choice to go modular. After some previous experience and testing a few modular fixturing systems he says, “Modular tooling fixture design systems increase the precision performance of any prototyping facility. It will also reduce labor hours and material costs in the long term.” I asked when I can expect to see the prototype for my next “car” preferably one that can hover and fly over traffic. I winked, hoping the best is yet to come while I can still get a license to fly. Be creative and think modular fixturing today, not tomorrow. The world will thank you.