With the growth of collaborative robots, manufacturers gain a valuable tool.

Robots in manufacturing is not a new idea. But today an increasing number of collaborative robots are joining the ranks, working alongside their human coworkers.

According to ResearchandMarkets, the “global collaborative robots market is expected to reach $36.84 billion by 2026 in terms of robot systems (including hardware, software, and service).” This represents a 2019-2026 compound annual growth rate of almost 45%.

“The primary driving force behind this growth is a consistently decreasing price,” according to the Robotic Industries Association (RIA). “Many collaborative robots are available for under $45K, making them a viable solution in a wide range of applications, inside and outside of the factory setting, for companies big and small.” 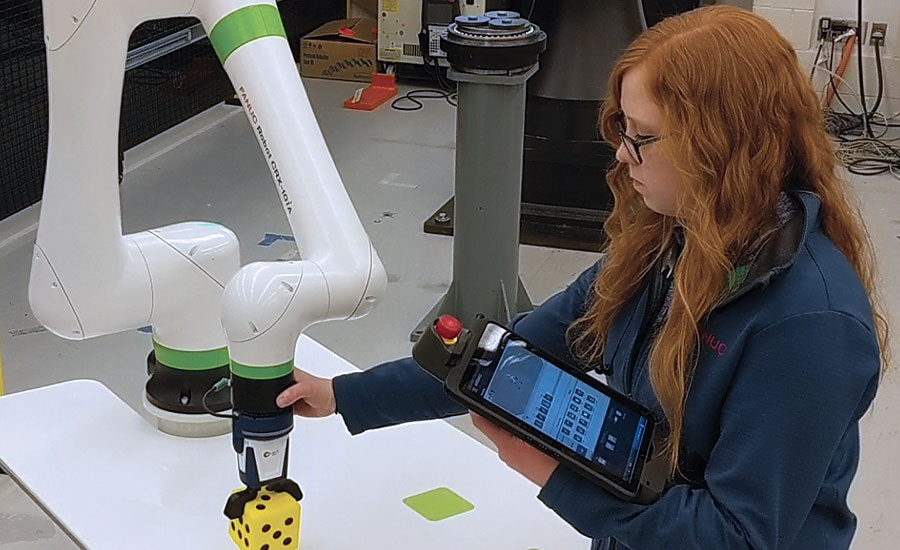 Teaching a collaborative robot can be done easily. Source: FANUC

Today, these collaborative robots, or cobots, are enabling better quality, better processes, and helping to improve operations overall. As David Henderson, CEO of New Scale Robotics, says, “The vision of what a collaborative robot can do is becoming more and more real.”

“People are talking about them more and more,” says Andie Zhang, ABB global product manager for collaborative robots. “Every single customer and every single industry, everybody’s trying to do something with them. There are new suppliers and applications. What I really like is industries and users that didn’t use them before are trying them out.”

These first-time users may have thought robots were too big or expensive for their application, but have found that collaborative robots are more accessible and have a faster ROI. With a large industrial robot cell, robots are a small part of a cell, Zhang says, but with collaborative robots, “the robot itself is the star of the show.” 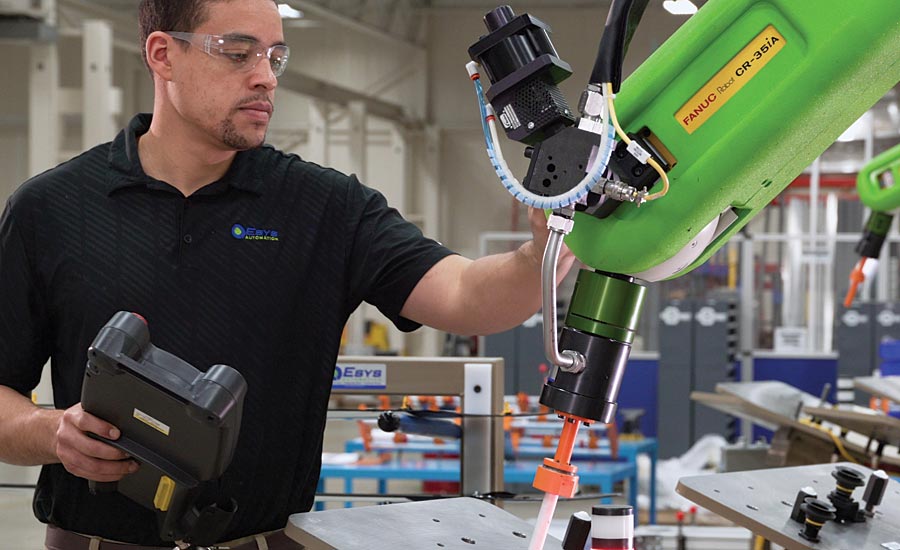 Collaborative robots work with or alongside humans on a range of industrial applications such as handling, machine tending, inspection and logistics. Source: FANUC

“In manufacturing, quality comes from consistency,” says Zac Bogart, president of Productive Robotics. “Consistency is really the holy grail. If you can’t build the same thing the same way every time you might as well not even start.”

With customers in industries such as aerospace, medical, and automotive, Bogart says that everyone expects a robot to be consistent. However, the manufacturer may have an inconsistent process that requires some human ingenuity to improve. In other words, Bogart says, “Sometimes the quality comes from the way they have to set up to make the robotic application work.”

Joe Campbell, senior manager of applications development at Universal Robots, says collaborative robots improve quality in a few ways. “I think they’re like any other automation tool. Any time you can take a process and make it more repeatable and predictable, you improve quality.” 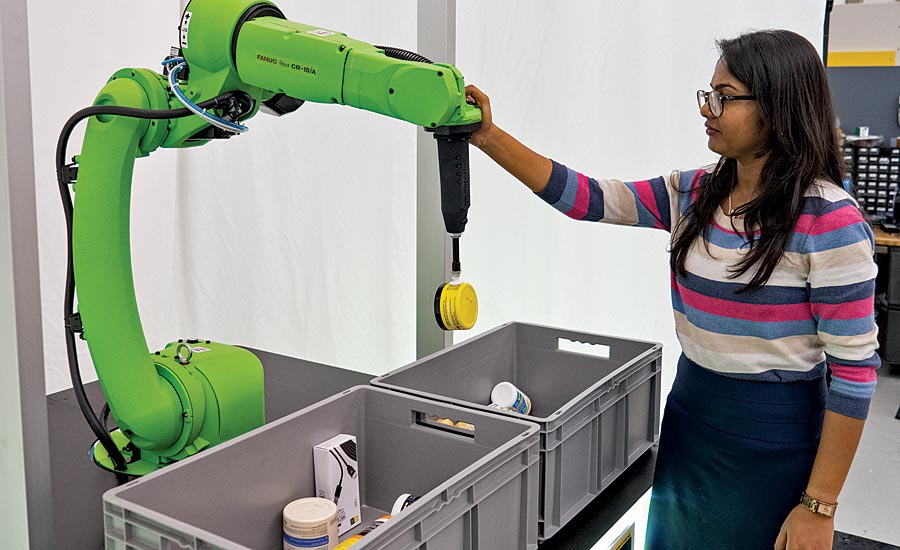 Collaborative robots are being used in applications such as random tote picking. Source: FANUC

“We’re starting to see lots of applications with our product in the metrology space,” Campbell says. “In many cases, they’re being deployed right in the assembly line, and work side by side with skilled workers.”

Unlike traditional robots that require safety guarding and thus more floor space, collaborative robots can be easier to fit in. The flexible nature means that they can be put on a cart and moved throughout the manufacturing process.

While an industrial robot requires 100% inspection rates, a collaborative robot is really about the interaction between a robot and operator. “When there is something the robot cannot do, then the human can help out,” Zhang says. For example, the collaborative robot would be working alongside its human coworker and flag any issues that come up. Once the issue is resolved, both the robot and the human go back to work. “It’s precisely for the tasks that cannot be automated using industrial robots with 100% reliability in an economical way,” Zhang says. 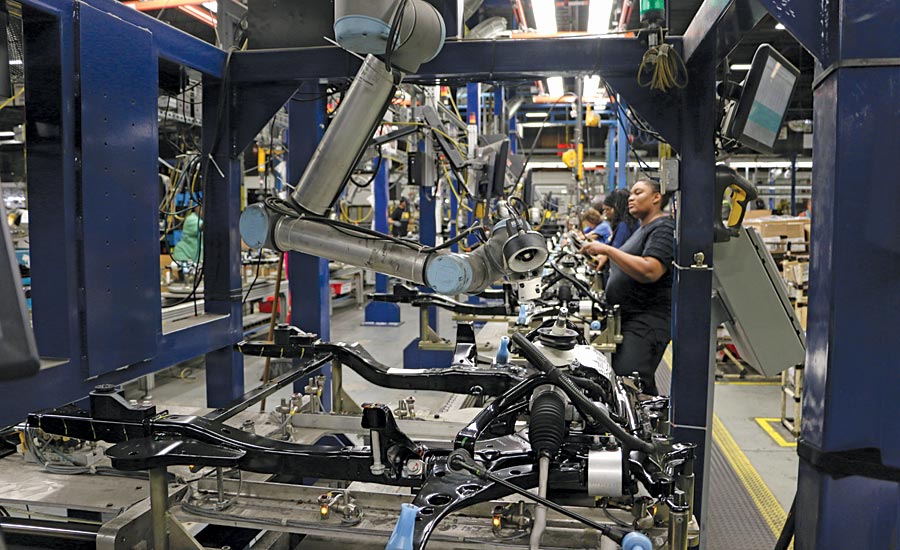 Universal Robots is classified as a collaborative robot – or cobot – due to the built-in safety system that makes the robot arm automatically stop operating if it encounters objects or people within its route. This means that Comprehensive Logistics can have the UR10 operate right next to employees on the line without the need for rigid fencing or light curtain safety guarding. Source: Universal Robots

For manufacturers that are planning on using collaborative robots on the plant floor, Bogart offers this advice: “Start with your easiest job.”

This allows for a quick win, Bogart says, and helps management feel they are going in the right direction. It also removes the fear of the technology.

“The key is to start simple,” he says. And in the future, Bogart says, this will only continue. “They have to get simpler. That’s our whole focus: simple, simple, simple.”

In addition to simplicity, consider what you need to get out of the measurement process. 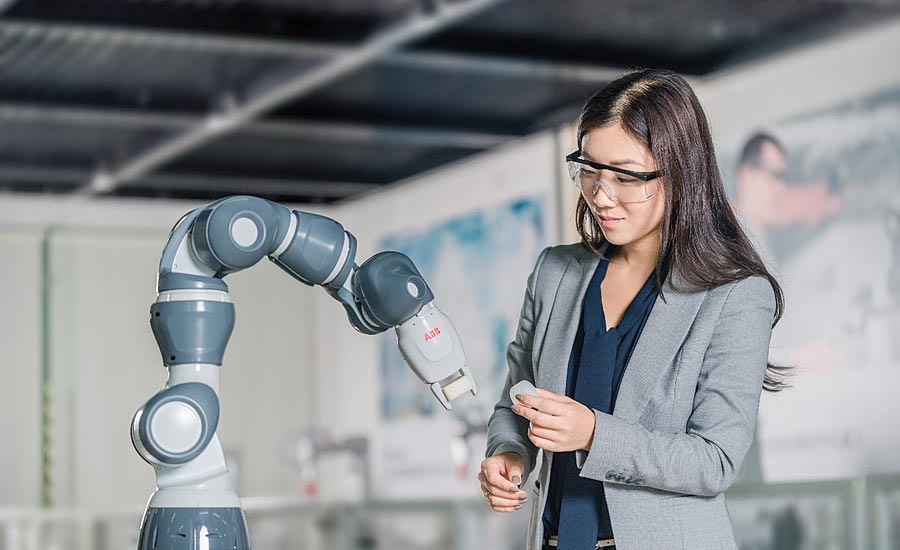 “The most important understanding is: what’s their process tolerance,” says Henderson. “The fundamentals of metrology are still there.” In terms of automation, Henderson says people previously wondered how to change a process flow or facility layout. These issues are much easier with a collaborative robot, he says, since it’s the same space and process flow. Whereas a safety barrier could potentially take up 30% of your lab space, a collaborative robot setup could simply be wheeled into a room and take up the space of a chair.

While quality is important, it’s not the only priority with robots. “One thing I always stress is always put safety first,” says McLenithan. “At the end of the day, just because you have a safe robot doesn’t mean your application is safe.”

The risk assessment should be done carefully. For example, if a robot is working near an operator handling razor blades or knives, consider if this application makes sense. 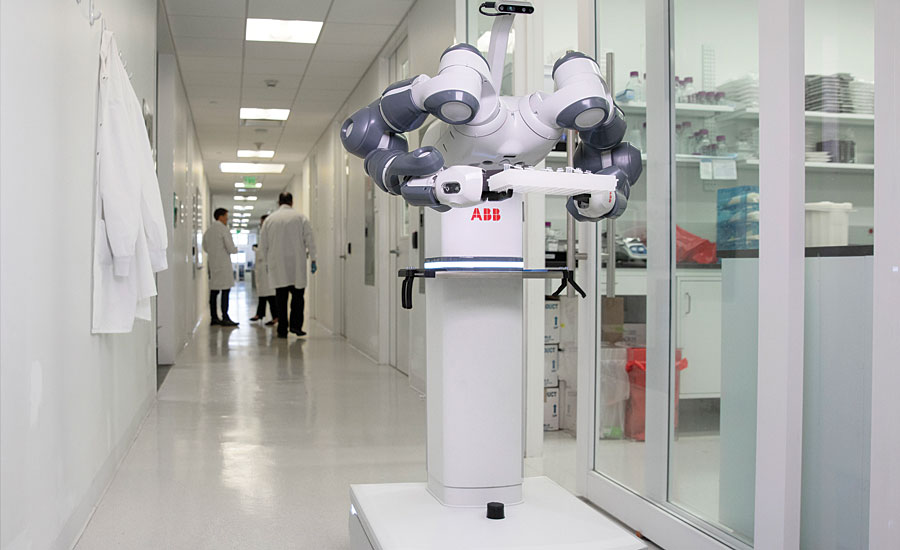 Coming Soon to a Plant Near You

“The trend to adopting collaborative robots doesn’t so much go by market segment or by manufacturing type,” Bogart says. “It goes really a whole lot more by the particular individual whose strategic vision drives the company. The other new trend is that one goes in and a bunch more follow.”

As with any technology, the role of collaborative robots has changed in the past few years.

“We’ve been in the automation business for a long time,” says Campbell. “When collaborative robots came onto the market, about 10 years ago, the first applications were machine tending, load and unload, machine handling. Those processes are still 50% of all applications.”

Over time the applications steadily expanded, much like the model followed by traditional robot companies. “Now there’s no application we’re not active in,” Campbell says, including dispensing, palletizing and painting.

Although the collaborative robots are on rise, some manufacturers may be hesitant about them.

“I think some of the traditional automation providers work very hard to create a perception that collaborative robots aren’t real robots, but they are,” says Campbell.

There’s also a perception that all robots are difficult to program, he says, but they are breaking down those barriers as well. For example, the company has taken those without any background in the industry—including members of the media—and taught them to program a robot.

Bringing programming to the shop floor is another trend, notes Henderson, who stresses the ease of use.

“If you can use your smartphone, you can use this robot,” Henderson says. “In the not too distant future, a robot will be seen as another device on the factory floor like the personal computer. It’s going to be fun to watch.”

While a fully automated system may sound ideal, Patrick Sobalvarro, president, CEO and co-founder of Veo Robotics, explains that full automation may not always be the best option.

“Collaborative is inherently more flexible than full automation,” he says. “You can address quality issues more quickly if you’re using collaborative instead of a fully automated step.” For example, fault recovery was previously very expensive. The robot would be caged, so if you see a quality problem with the robot, someone must go in to correct the fault. It may take some time to unlock the cage and fix the operation. In other words, “A two-minute quality issue that stops the line turns into a 40 minute line stop,” Sobalvarro says.

Robots are clearly a part of the future of manufacturing, and Zhang encourages manufacturers to give collaborative robots a try.

“In ten years, how do you see your factory? Do you see more robots?” Zhang asks. “The answer is always yes. Then let’s get started now.”