Knowing how much human-robot collaboration your application needs is the first step towards a successful adoption.

Originally made popular by the introduction of Rethink Robotics’ Baxter, so-called collaborative robots have created a lot of excitement around the industry over the last few years. Before that, robots had been seen as limited to large industrial projects where they sat behind safety fences without human interaction. Recent advances in technology, however, have brought humans and robots closer together in a variety of industries and created a high demand in the marketplace.

What is not in question is that these robots have opened up a number of exciting uses. But in some cases, their industrial counterpart can perform the same actions at a higher level. So, how do manufacturers find out which solution is the right fit for their application?

Why collaboration is hot

Collaboration offers adoptees a lot of potential benefits. These robots can assist workers with ergonomically challenging tasks and support a lot of non-standard and small volume applications. Many of them can be inexpensive and easy to set up. “Cobots,” as they are sometimes referred to, can be quickly redeployed in other production environments doing the same job or different jobs, providing much needed flexibility.

Since these robots do not need to be surrounded by a fence to operate, manufacturers can better utilize their floor space, sometimes saving as much as 50% in total area with the same application. This relief is especially helpful in facilities that do not have room for expansion.

Because they have round edges, low payloads and operate at low speeds, many of these “cobots” are safer coming out of the box than their industrial counterparts. But it’s important to remember that their tooling and payload can bring up important safety considerations, especially if they are sharp or hot. All of these robots still need to have their safety parameters configured and, depending on the application, may require extra hardware, like area scanners or vision, to make them safe. 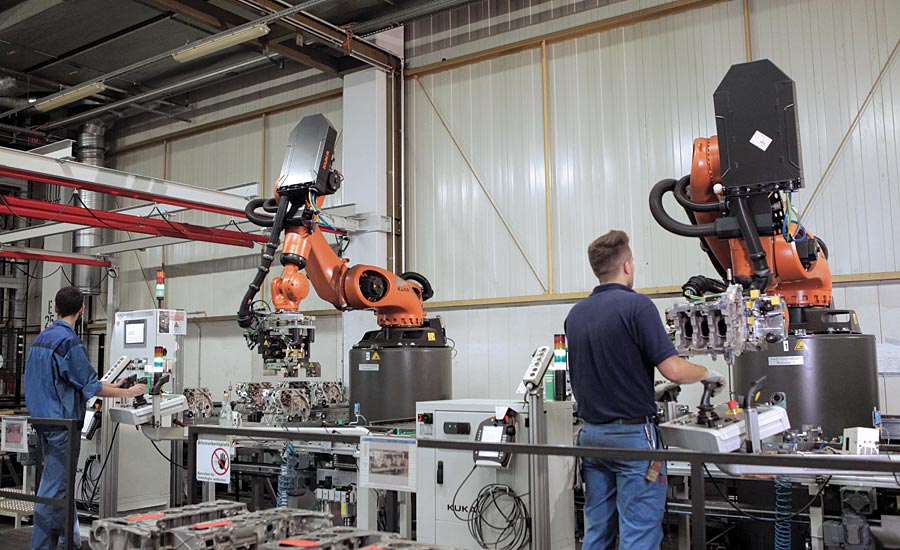 With the right safety technology, industrial robots can operate in a collaborative environment.

What is Human-Robot Collaboration?

The enthusiasm over these robots is understandable, but we’ve had people come to us for something collaborative when there is no need for a human in the workspace. While “cobots” have much to offer, it’s important to remember that there is no such thing as a collaborative robot, only collaborative applications. The technical specification ISO/TS 15066 breaks these down into four areas:

Hand guiding is often what people picture when they hear collaborative robot. While these applications are a great developmental tool, they are not very useful in production. Most robots used in power and force limiting applications are described as “collaborative” by their manufacturers. There are very useful, but have to be slowed substantially to work alongside a human without an area scanner. Speed and separation monitoring and safety-rated monitored stop allow both collaborative and industrial robots to work safely around humans by either slowing or stopping when a worker gets near. 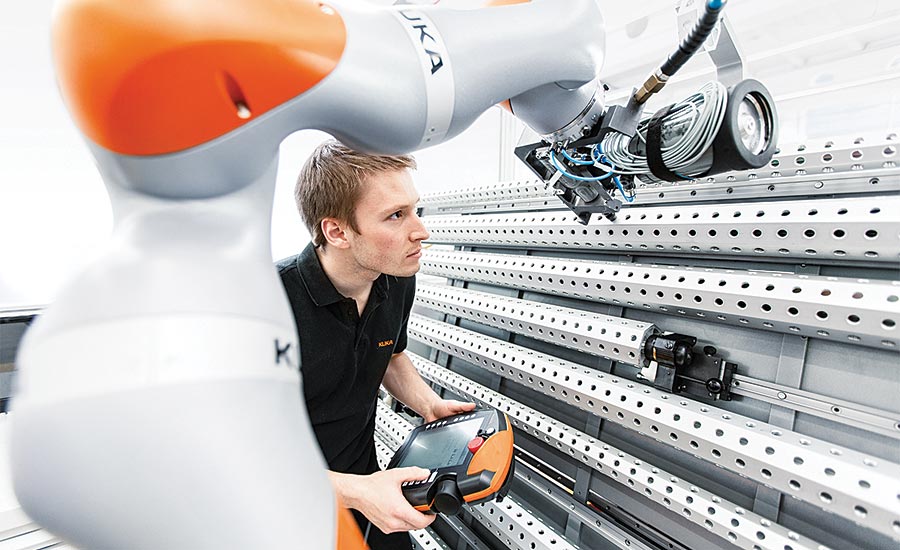 One of the benefits of ‘collaborative’ robots is their ability to assist with ergonomically challenging tasks.

There is a wide spectrum of collaboration with a robot, including a fully separated workspace, or separation without a physical barrier. You can occasionally share a workspace, or separate the robot and person while they are working in the same space. The ultimate collaboration is when the robot is working with people all the time. That is where the unique features of a collaborative robot improve safety, but there is a wide variation in optional features so looking for the lowest cost option is rarely the best choice. 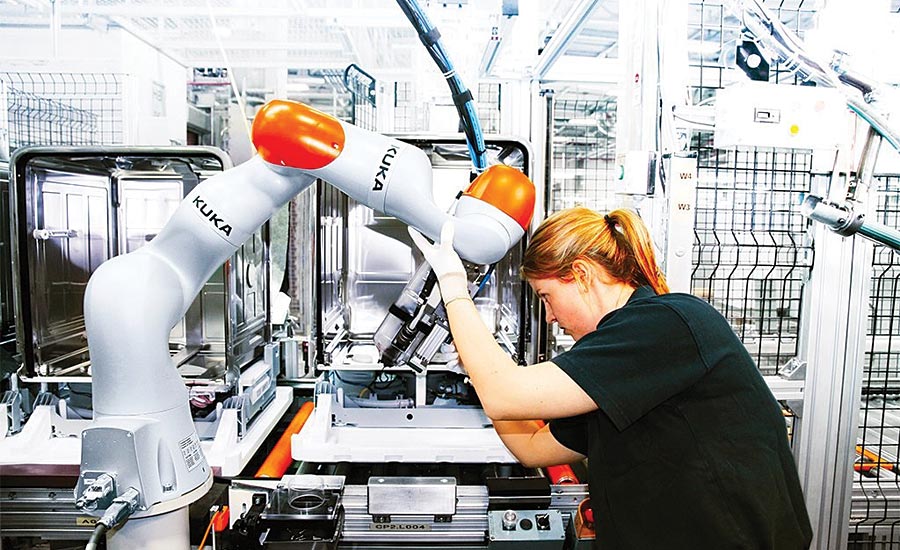 A ‘collaborative’ robot can add much needed flexibility by moving from machine to machine.

Balancing the positives and the negatives

That does not mean one robot is good and the other is bad. It depends on what is most important to the end-user. Take a machine tending application, for example. Using a traditional industrial robot with a laser scanner can eliminate protective fencing while delivering higher payload capacity and faster robot motion. But the larger scan area can result in the robot often slowing down when somebody walks into the area.

On the other hand, a “collaborative” robot offers more flexibility with its ability to move from machine to machine and more efficiently work with a wide variety of parts. But it will also mean lower machine utilization and having to address controls integration to machine for the end of the cycle.

In the end, both types of robots have their benefits. It all depends on what you are looking to get of the application you are working on and what you are willing to trade off to get there. To give you a perspective on this, I work in medical, where every application is collaborative. But I sell both traditional industrial robots and collaborative ones. V&S