Mobile robots are an increasingly important part of modern manufacturing.

Whether they are going mobile or adding artificial intelligence, a range of robots are appearing on the manufacturing floor - and more are on the way.

“Things are really rocketing forward,” says Jeff Burnstein, president of A3, “and it’s a whole bunch of industries that are automating.”

Robots On The Move

Mobile robots are shaking things up on the manufacturing floor. Matt Charles from MiR discusses robotic trends—including flexibility, safety and artificial intelligence—as well as how prospective robotics clients can get started.

The industry is growing faster than ever, and there are a lot of new trends to be aware of, says A3 President Jeff Burnstein, including mobile robots, AI and the rise of automation.

According to the International Federation of Robotics (IFR), “Annual installations of industrial robots more than tripled within ten years (2010-2019) reaching 381 thousand units in factories around the world.”

As you would expect, the pandemic left its mark on the industry as well.

In looking at robotics trends, the International Federation of Robotics released this statement: “Advances in robot technologies are contributing to increased robot adoption,” said Dr. Susanne Bieller, general secretary of the IFR. “The COVID-19 pandemic hasn`t started any new trends but it accelerated the use of robotics beyond established practice. In this respect, the pandemic has proven to be the biggest single driver for change in industry.”

Here we’ll look at how robots have grown in the past few years, thanks to technology improvements as well as current events, and discuss a few trends that can improve your manufacturing process.


The Revolution Has Arrived

While many sectors of the robotics industry are booming, mobile robots is a particular standout. Though robotic mobility will continue to advance, it’s ready to use now. As the International Federation of Robotics says, “The mobile revolution is already here!”

“While researchers have worked on technologies for autonomous mobility since the 1940s, autonomous mobile robots have only become commercially viable over the last decade,” according to “A Mobile Revolution,” IFR’s June 2021 paper. “This is primarily due to the availability of far more powerful and cheaper computing power. This has led to rapid developments in sensor, vision and analytics technologies which enable robots to connect in real-time to their environment. Today, “Autonomous Mobile Robots” show double digit growth.

“The fastest-growing segment of mobile robots is the Autonomous Mobile Robot (AMR). An AMR may consist only of an autonomous mobile platform or base, which can be loaded with goods to transport.”

The paper goes on to say, “AMRs frequently act as the ‘glue’ that links otherwise disconnected parts of an overall process, generating data that can be used to gain a real-time overview of performance across the entire process.” 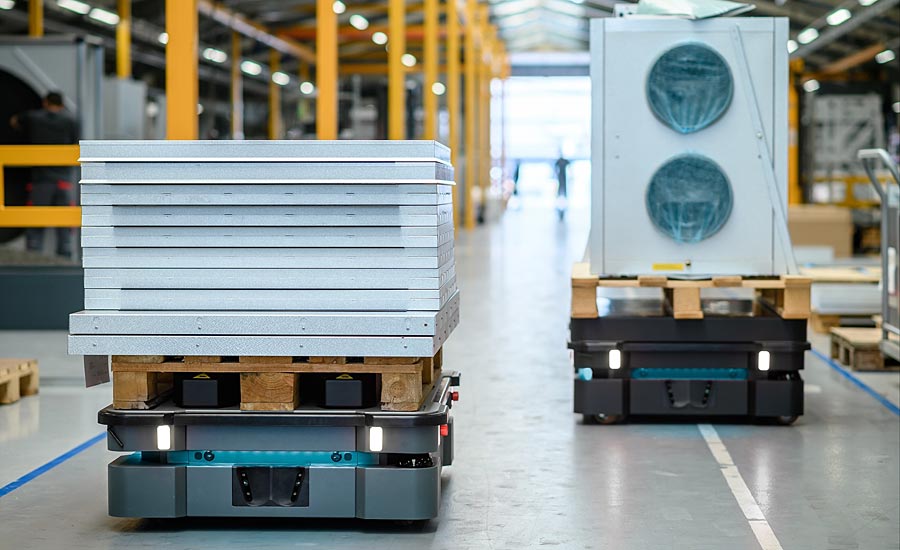 MiR’s new MiR1350 and MiR600 are Ingress Protection52-rated autonomous mobile robots, which means their components are protected and can tolerate dust and water drops.Images Source: MiR

Burnstein echoes the importance of safety. To that end, A3 released a mobile robot safety standard earlier this year. (Learn more about the standard here.)

A second big trend is that customers want flexibility in how the manufacturing process flows, Charles says. For robotics in general, he notes that artificial intelligence is the big buzzword. This can take many forms, such as using AI vision sensors to make route planning better or AI for support in troubleshooting to lessen downtime.

Quality is always a goal when implementing robotics and there are a few ways robots can address this need. In terms of quality-specific work, Charles says their robots may be used to move parts to a quality inspection area if it is not next to the production line. Instead of moving a part yourself, whether you put it on a cart and wheel it over or load it on a forklift, let a machine do it. “Our robots can replace that task,” Charles says. “We can automate that quality check part of the transportation. It keeps the line moving, it keeps people at their station doing their thing.”

The robots can make sure production is flowing smoothly, from automating workflow to streamlining part travel. During the pandemic, this need became especially apparent.

Business at MiR has been booming, Charles says. The company had record sales, as companies tried to keep up with production throughout the pandemic. This required some new ways to get work done.

If a manufacturer is looking to improve quality and considering robotics, Charles offers this advice: “The message would be just to get started.” The company would be able to bring a robot to your facility and discuss automation. An initial visit would include a look at challenges as well as potential “home run applications,” he says.

Applying some industry trends may be intimidating but it is possible. 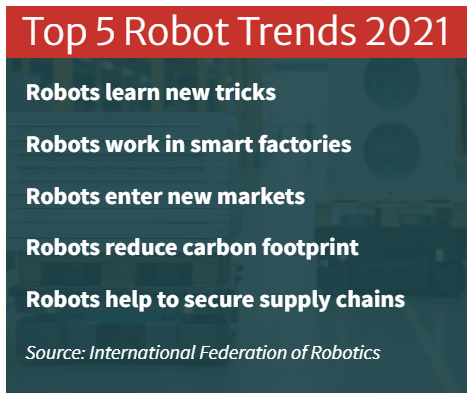 “The hype is always an issue when you hear the term artificial intelligence,” Burnstein says. “People get in their minds some machine that is taking over the world. That’s not where we are. We’re at a point where machine learning is being used for real-world applications. AI is being used in areas like predictive maintenance. But one of the most common tasks is: how do you pick up something, grasp it, package it, how do you pick it out of a bin of objects, and machine learning is helping robotics achieve some of these tasks. I think there’s a great deal of excitement around machine learning and AI.

“We recently created a technology sector board of directors for our association, which is the first new tech sector board we’ve created in the past 15 years. There’s just a lot of activity going on with real world applications connected to machine learning.”

With the increasing interest in real world applications, A3 released a white paper on this topic with examples. It was extremely popular—and for good reason.

“People want to know how do you incorporate AI, robotics, machine vision, how do you use all of these technologies together on a practical solution,” Burnstein says, “and more and more companies are figuring out how to do that.”

The Rise of Mobile Robots

It all started with Elma and Elsie.

The history of mobile robotics begins in the late 1940s with two autonomous mobile robots created by British physiologist W. Grey Walter, according to the IFR paper. These were developed to model and research electrical signals in the brain. Elma and Elsie were able to detect and move towards a light source while also avoiding obstacles.

From there, IFR points out a 1956 conference that brought together artificial intelligence researchers focused on machines designed to emulate human intelligence while also considering mobility. Next, mobile robots were used for research in the late 1960s and early 1970s.

Commercial applications were still on the horizon. It took advances in technology to get adoption rates higher.

Though the industry is growing, there is still plenty of room for more growth.

According to IFR, “Robot density in the general industry is still comparatively low with only 139 units per 10,000 employees. Overall in all surveyed countries worldwide, the potential for robot installations in the general industry is tremendous. In the United States for example, yearly orders of robots from non-automotive sectors surpassed automotive robot orders for the first time. Sales of robotic units in the U.S. increased 7% in 2020 from 2019.”

The International Federation of Robotics will publish an update of the World Robotics 2021 statistics October 28th.

Company Projects: Get Everyone Involved

From the Editor: Robots and Me

Get Smarter About Software

Sledgehammer vs. Nutcracker: Which is the Right Tool for the Job?