What is GD&T? GD&T (Geometric Dimensioning & Tolerancing) is a symbolic language for researching, refining and ultimately encoding the functions of each feature of a machine part in order to specify permissible limits of imperfection to guarantee assembly and operation. Without GD&T, design processes cannot be function based, tolerance stack up analysis is impossible, manufacturing is a guessing game based on tribal understandings, and coordinate metrology is impossible. In spite of these reasonably well known, very positive forces, GD&T is not widely used, is rarely taught at universities and if used, is frequently misused. Why? Because the main resources for its use, the ASME and ISO GD&T standards, have become exceedingly complex and confusing in recent years. This includes 1) confusing terminology, 2) confusing symbols, 3) non-functional concept definitions, 4) a huge lack of rules and 5), a lack of application process guidelines. For the sake of industries around the world, it is therefore time to make GD&T much easier to use, and to use properly. But how? We will start with examples proving the need for repairs, then present examples of possible repairs, and finally, present ideas for encouraging and enabling their implementation.

Here, then, are a number of examples of confusing Y14.5 Standard terms and definitions, along with recommended improvements. Reviewing these entries will require patience and perseverance, but doing so will produce significant new clarity and hopefully a desire to begin pushing for a brand new standard - a simplified, clarified, “rulified” gift we so desperately need.

Consider extending the (S), (M) and (L) set with an “in-material” Regardless of Feature Size modifier (S-) to enable a currently missing capability, and changing the current (S) modifier to (S+) to clarify its impact, resulting in the new set (S+), (S-), (M) and (L).

In order to eliminate user confusion regarding the difference between the impacts of Tolerance Zone Size and Tolerance Zone Mobility modifiers, consider making the latter also look different, namely switching from (S), (M) and (L) to, and , and, in order to impose in-material as well as in-space stability requirements, including the modifier .

Recommended Definition: A specially labeled, imperfect physical surface of a real part which serves to constrain rotational and translational degrees of freedom between mating parts during assembly and, when listed in a Feature Control Frame, contributes to defining a Datum Reference Frame.

Because DRFs (Datum Reference Frames) are absolutely stable inside their simulator sets, simulators which are free to residually rock, roll or trantslate relative to their mating Datum features produce residually mobile DRFs and associated tolerance zones, which represent play between mating parts during assembly.

Recommended Definition: A Datum is the minimum, mutually embedded set of a single, perfect imaginary reference point and/or line and/or plane extracted from a Datum Feature Simulator, which together, fully characterize its orientation and location. Purpose: Datums serve to constrain “starter” coordinate systems and turn them into Datum Reference Frames. Here are images of all six possible Datums;

Recommended Definition: A Datum Reference Frame is a Cartesian coordinate system, which is partially or fully constrained by a set of Datums extracted from a set of Datum Feature Simulators, defined by a set of Datum Features listed in a Feature Control Frame. Purpose: Datum Reference Frames serve, with the help of Basic dimensions, to orient and locate tolerance zones in the part under consideration, and relate them to the tolerance zones in the mating part.

Example: Consider a part with a primary cylindrical Datum Feature A which constrains pitch, yaw and two degrees of translational freedom, and a secondary Datum Feature B, in the form of a countersink whose axis is perpendicular to A, which, when engaged by a mating sphere, constrains roll and the last degree of translational freedom. Their associated Datums are a line in the case of A and an offset point in the case of B. The two Datums themselves do not represent a Datum Reference Frame, but actually serve only to constrain a three axis “starter” coordinate system and turn it into the applicable Datum Reference Frame.

Y14.5 2018: Note: No Feature Control Frame decoding processes are found in the Standard.

The Feature Control Frame Decoding Process: In order to be fully functional, the encoded instructions in a Feature Control Frame must be uniquely decodable and certainly not open to “interpretation.” Here is an example applied to a shaft using the newly recommended Tolerance Zone Mobility modifiers , ,and: 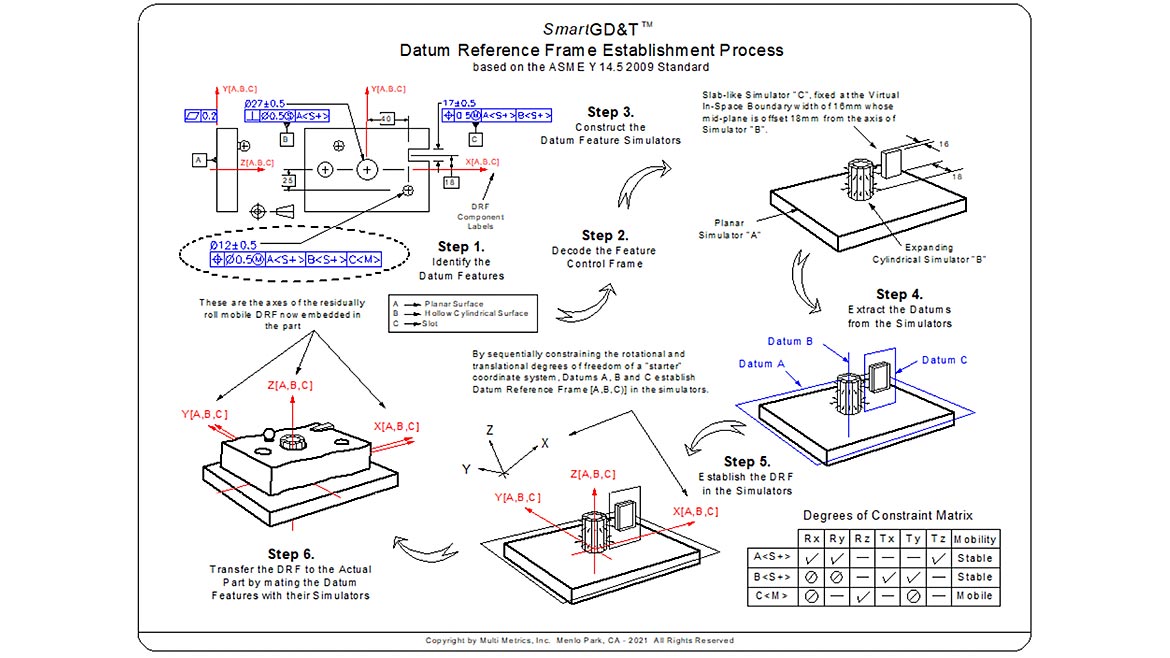 
Ideas For Enabling Creation Of A New GD&T Standard

It is hoped that the above entries have enabled readers to discover the trouble we are in and the burning need for a new standard based on simplicity, clarity, processes and rules, in order to enable enjoyable and functional use of this magnificent tool. If so, the next step must be to make it happen. But how?

The most effective – actually the only - way to clean up something so complex, in which every piece of the pie depends on every other piece, is to start over. The common approach has always been to try to fix the existing Standard, but, as demonstrated by the current Y14.5 2018 version, this did not work, nor will it ever work in the case of a so many faceted, complex topic. The old always gets in the way of the new. Therefore, the only way is to start over, as was the case with the British system of weights and measures when it was replaced by the French Metric System. And so, it is time, it would seem, to encourage the Y14.5 Committee to start over, namely to form a “GD&T Development Group” consisting of proven experts who are totally focused on the project and absolutely dedicated to getting things right - not to proving they are right - and who also feel that the sooner proven wrong, the better. And, in addition to an expert “Development Group,” the Committee must also be encouraged to form an expert “Review Group,” and hopefully pay all the members for their time, and maybe even pay them royalties to encourage aggressive, dedicated performance.

If readers are inclined to proceed, please review the source document (see the link below) containing the entries used in this article plus many more, and then forward it with your comments to Fred Constantino, the secretary of the ASME Y14.5 Standard Committee (ConstantinoF@asme.org), in order to encourage them to investigate and possibly address these concerns and ideas. They have lots of good people who will surely be interested. And perhaps share a possible financing idea as well: namely recommend that corporations around the world who recognize what they are missing, participate in financing the project, maybe in exchange for receiving free access to the new standard for an agreed upon number of years.

Thank you for taking the time to read the article and, if you agree with its content and objectives, special thanks on behalf of the whole world for gently encouraging our standard committee to consider these and the many additional recommendations to be found in the source document.

GD&T Workshop: The Fundamentals of GD&T