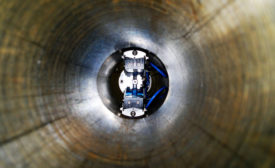 The direct and indirect cost of corrosion can be staggering.
Bob Ward
4 Comments

A well-known study published in 1999 by NACE (the National Association of Corrosion Engineers) titled “The United States Cost of Corrosion Study” indicated that the direct cost of corrosion is more than three percent of the Gross Domestic Product (GDP).