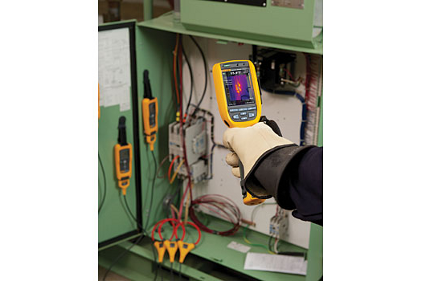 Fluke Corporation expands the CNX™ Wireless Test Tools system to include the Fluke® Ti1XX Series Thermal Imagers, enabling users to troubleshoot even more problems than before.
For customers who currently own or will purchase a Ti1XX Series Thermal Imager and CNX modules, there is a free, user-installable firmware upgrade within SmartView® software that enables the thermal imager to capture and display electrical measurements wirelessly.
The Fluke CNX Wireless System is a set of test tools that wirelessly connects multiple measurement modules and sends simultaneous readings to a CNX main unit up to 20 meters away, allowing users to troubleshoot problems faster than with traditional tools. The rugged, customizable tool set allows users to choose various measurement modules, from voltage to current or temperature, based on their specific troubleshooting scenario.
CNX main units now include the Ti1XX Series imager, which allows live measurements of up to five wireless modules to be viewed on its screen and integrated into the infrared image, and the CNX 3000 Wireless Multimeter, which can display its readings along with readings from up to three other measurement modules. Up to ten live measurements can be viewed simultaneously on a computer equipped with the CNX PC Adapter.
Fluke Corporation
www.fluke.com