Measurement system analysis can help you improve the quality of your products.

When I first got involved with quality, I learned about the “five M’s” that constituted most root causes: man, machine, materials, methods, and measurement. In manufacturing you know that measurement gages and how they are used can be a key cause of variation.

MSA is actually quite simple, but even seasoned SPC veterans don’t seem to understand it. So I thought I’d simplify it for you.

Second, when you measure, three factors come into play:

To conduct a Gage R&R study, you will need:

Here is a sample of Gage R&R data from the AIAG Measurement Systems Analysis Third Edition. Note that this data ranges from -1.68 to 2.26. If we plug this data into Gage R&R software, the input form might look like Figure 1. 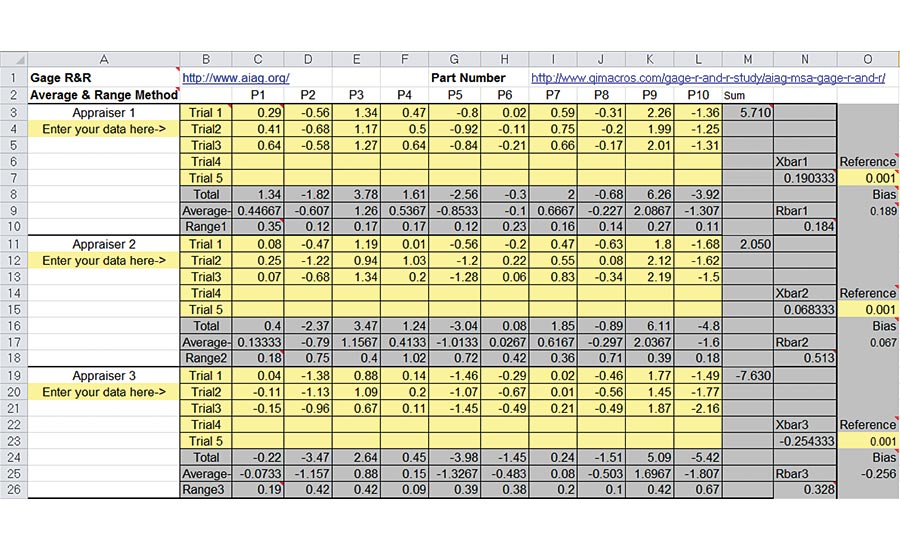 The results (Figure 2) show that NDC = 5 (the minimum for a good GR&R). Notice that %PV (part variation is large, but so is %R&R. Appraiser variation (%AV) is somewhat larger than equipment variation (%EV). Both could use improvement.

There are three ways to calculate %R&R:

If NDC is less than 5, there is not enough part variation to do a valid Gage R&R.  You will need 10 parts that span the specification tolerance to get a good GR&R.

What to Look For

If you simply look at the measurements, can each appraiser get the same result on the same part consistently, or is there too much variation? If repeatability (%EV) is larger than reproducibility (%AV), reasons may include:

If reproducibility (%AV) is larger than repeatability (%EV), reasons include:

If you look at a control chart of appraiser performance, you’ll be able to tell if one person over reads or under reads the measurement (Figure 4). Appraiser 3 consistently measures below appraisers 1 and 2. You can also see that the performance is out of control. 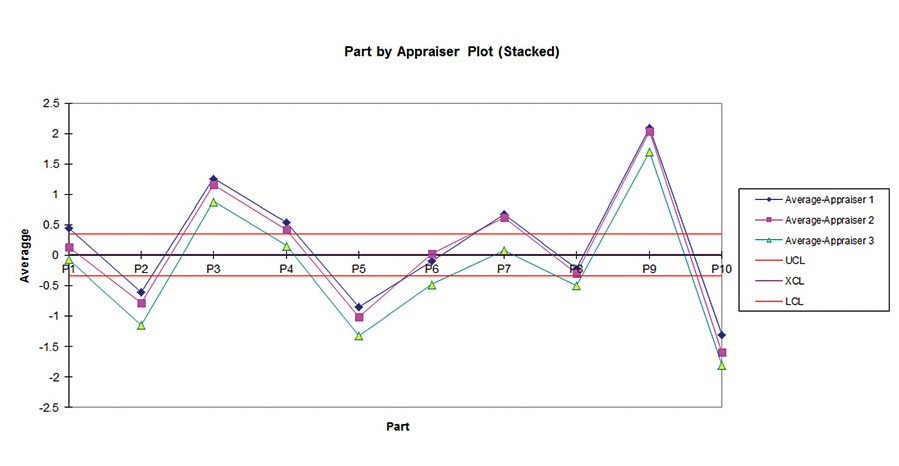 Many people don’t like the answer using the Gage R&R. Most of the time, it’s because they didn’t follow the instructions for conducting the study. Here are some of the common mistakes:

Challenges You Will Face

Other Forms of Gage R&R

There are other methods of Gage R&R not discussed in this article:

Your goal is to minimize the amount of variation and error introduced by measurement, so that you can focus on part variation. This, of course, leads you back into the other root causes of variation: people, process, machines, and materials.

If you manufacture anything, measurement system analysis can help you improve the quality of your products, get more business from big customers, and baffle your competition. Enjoy.