Collaborative robots, or cobots, are infiltrating factories on a global scale. But can robots and humans really work together in harmony? We asked the experts.

According to the 2017 World Robotics Report, conducted by the International Federation of Robotics (IFR), more than 1.7 million new industrial robots will be installed in factories around the world by 2020.

Today, Asia is experiencing the strongest growth in the robotics industry, led by China as the world’s top marketplace. The five major markets, which represented 74% of the world’s total robotics sales volume in 2016, are China, South Korea, Japan, the United States, and Germany.

So it was a boon when the Robotics Industry Association (RIA), a North American trade group, announced in September that China’s largest robot supplier and integrator, SIASUN Robot & Automation, had jointed RIA as the group’s first Chinese member.

“Chinese robotics companies have only recently begun to pursue the North American market,” says Jeff Burnstein, president of the Association for Advancing Automation. “We had 14 Chinese robotics companies participate in our Automate 2017 show, most if not all exhibiting in the U.S. for the first time. Many of these companies are helped by the Chinese government, which is actively helping them become leading global suppliers as part of their national strategic plan for robotics.”

However, several North American and European companies exhibiting at this year’s Westec show in Los Angeles also proved that collaborative robots, nicknamed “cobots,” are the future of the automation industry.

Universal Robots (UR), headquartered in Denmark but with corporate offices and distributors worldwide, is one of those companies utilizing cobots to tremendous effect. At Westec, UR demonstrated the ability of third-party simulation software to perfectly sync with UR cobots in real time: a springboard from last year’s launch of Universal Robots+, an online showroom and app store featuring a variety of plug-and play products.

“Typically, once a robot is deployed for an application, that is the sole purpose of the robot,” Kidwell says. “Whereas [a UR cobot] can be redeployed in a quick and simple fashion, especially when using off-the-shelf products that interface seamlessly like those in the UR+ showcase.”

For more insight into how cobots are transforming industrial applications worldwide, Quality spoke to Burnstein and Kidwell about some of the advancements, pain points, and opportunities in the current state and not-so-distant future of the robotics industry.

How are SIASUN and other Chinese companies utilizing industrial robots, and how do these strategies compare and contrast with those of other major markets?

Jeff Burnstein, A3: SIASUN and other leading Chinese robotics companies have robots for many applications, such as welding, material handling, and assembly. Several, including SIASUN, are also targeting service robots. I recently saw SIASUN products that could be used in elder care, an exciting development given the great need for advances in this area. The Chinese government wants to have Chinese suppliers capture more of the domestic Chinese market, now the largest in the world, as well as compete successfully in global markets, including North America.

Many Americans seem to think that more automation equals less manufacturing jobs; but at the same time, automation seems to be the key to growing more manufacturing jobs and facilities in North America. How does RIA go about educating the public on the benefits of automation, while still being honest about the pain points? 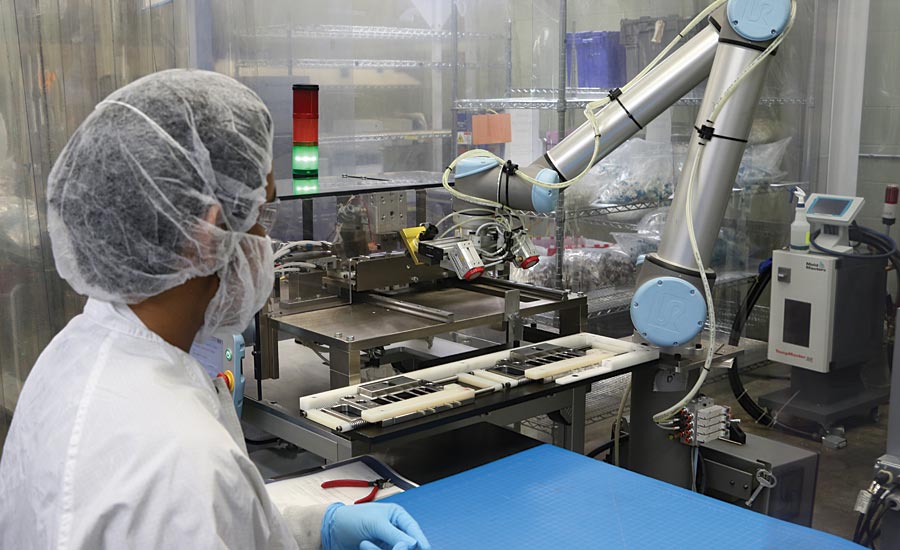 A UR cobot in action. Source: Universal Robots

Burnstein: The biggest threat to jobs in America or elsewhere is when companies are unable to compete. In those situations, all jobs often disappear, or are shipped elsewhere. We’ve seen that far too often in America in the past two decades, as companies decided to ship manufacturing to China or elsewhere to take advantage of low-cost labor.

When factories close, it’s not just the jobs inside the factory that are lost. Suppliers to the factory; the restaurants, bars, dry cleaners, and other businesses in the community; and any companies depending upon a vibrant manufacturing sector become the biggest losers. This can hollow out communities: lower tax base, declining home values, less money for schools, etc.

Wouldn’t it have been better for American companies to automate: saving jobs in the process, becoming stronger global competitors, and ultimately having the chance to create more jobs? We have several great examples of companies that did this and ended up hiring more people than they had before, because they were able to win new business—thanks to lower costs and an improvement in productivity and product quality.

Check out A3Automate.org and watch the videos from companies like Marlin Steel in Baltimore or Vickers Engineering in New Troy, MI. Their CEOs will tell you that automation was the key to saving and creating jobs, and giving their companies the ability to compete.

Kyle, what are some of the headaches end-users report with robotics applications that UR helps to solve with the UR+ platform?

Kyle Kidwell, UR: Some of the headaches in robot applications are setup and deployment. The typical setup time of a UR robot is around half a day, which is much shorter than most robot applications, as many of them require a lot of work with setting up peripherals and getting them running. This also helps with redeployment of robots, as the robot can then be moved from station to station and adapted to new applications in a matter of a couple hours or less, which helps for a high mix of applications running
in a facility.

Tell me more about the Actin Simulation software from Energid that was used in the Westec demo.

Kidwell: The Actin software utilizes information from cameras positioned around the work area to interpret the location of key items; these positions are then simulated in real time and can be used to manipulate the robot.

How was the demo received?

Kidwell: The demo was received very well. Many people were impressed by the ability of the simulation software to integrate with the robot and actively allow it to follow the hopper within its work cell. Many people who stopped by the demo enjoyed moving the hopper or the avoidance wand to manipulate the robot in real time.

One barrier to entry for many who wish to automate is cost. Another is user-friendliness. Is robot technology becoming more accessible, from financial and operational standpoints? And if so, how do you see that trend continuing? 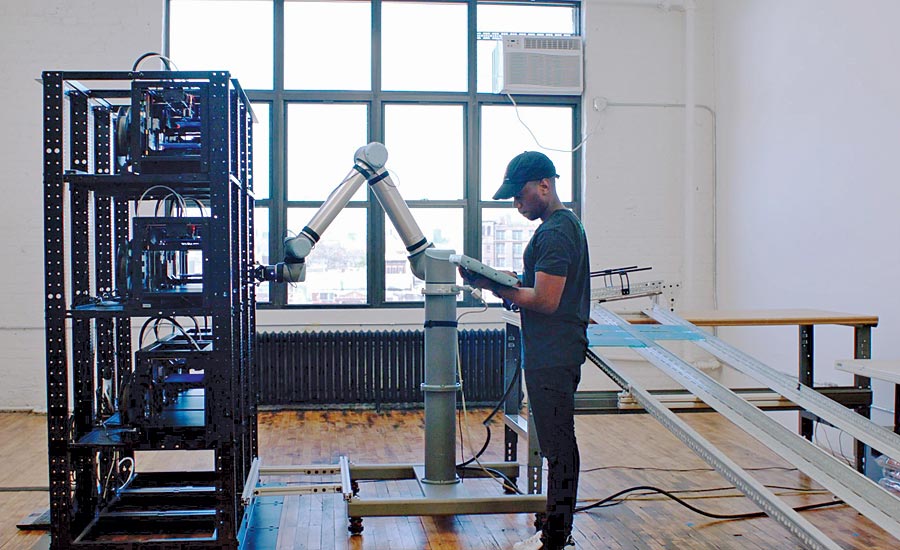 Voodoo, a Brooklyn startup, chose the UR robot due to its quick integration with peripheral systems enabled through the UR+ platform. In deploying the cobot, the company also cut costs by 90%. Source: Universal Robots

Burnstein: Robots are less expensive and easier to use than ever before; that’s why so many small and medium-sized companies are now using or exploring using robots. This trend will continue going forward—especially with the development of collaborative robots, which often require less floor space, integration costs, and safeguarding expenses.

Kidwell: Financially speaking, robots have started to emphasize a quick ROI in the manufacturing industry. Labor is continually becoming more difficult to find or retain, all while the ROI cycle of implementing robots is decreasing. To turn a profit implementing Universal Robots, the average ROI is 10.5 months, which is significantly lower than conventional robotic cells.

As for user friendliness, that has been a major focus with collaborative robots, with the focus on getting as many people as possible familiar with using and setting up the robot. This enables end-users to redeploy robots for new applications, without needing a certified robot programmer in-house or having to hire an external programmer to come in and set up a robot.

There are e-learning modules for UR that help new users become proficient with robot programming in around 90 minutes, which means many people can become familiar with the robots, with little or no background working with robots.

Cobots are getting smarter every day, and when it comes to repetitive tasks that require utmost speed and accuracy, or contain high safety risks for humans, they’re clearly superior to employing manual labor. But is there a line to be drawn for how much we’ll allow robots to do for us? Does anyone know where the line is?

Burnstein: The future will involve people and robots working together. People doing what they’re best at (using their brains, not their brawn), and robots doing repetitive, dull, and dangerous jobs that people don’t really want to do anyway.

I don’t think we have to worry about “lines” of what robots should be “allowed” to do. Robots are like any other tool; we use them to our advantage.

Years ago, some 70 percent or more of Americans worked on farms. Automated farming has allowed us to produce more food, safer food, and cheaper food than ever before; and only about 3% or so of Americans currently work on farms. People found many other things to do; they always have, despite advances in technology, and they always will.

The important thing, from my perspective, is to focus on the opportunities, not the fears.

Will driverless cars eliminate 90% or more of the 30,000-plus auto fatalities that occur annually in the U.S.? Will artificial intelligence help doctors find cures for rare cancers and other diseases that allow us to live longer and healthier lives? Will advances in service robots enable us to stay in our homes longer, so that we don’t have to live out our lives in nursing homes? Will robot technology allow companies to produce products we want to buy at much lower costs, helping us save more money? I expect the answers to all of these questions will likely be yes, which is why I think we should continue to use robots to make our lives better and not see them as threats.

Take the Fear Out of Audits