NDT on the Flight Line

On April 20, three days after a Southwest Airlines Boeing 737-700 experienced an engine failure due to a fractured fan blade, resulting in the death of a passenger, the U.S. Federal Aviation Administration issued an emergency airworthiness directive that requires operators of CFM56-7B engines with more than 30,000 flight cycles to perform a one-time ultrasonic inspection of all 24 fan blades to detect cracking.

It was the second failure of a CFM56-7B engine fan blade on a Southwest flight: a similar episode occurred in August 2016 when a fan blade broke at the engine hub and debris caused a 5-inch by 16-inch gash in the fuselage. Following that incident, the engine’s manufacturer, CFM International, recommended ultrasonic inspections of fan blades on CFM56-7B engines with 20,000 cycles be completed before the end of August 2018.

Fatigue in aircraft components and materials is obviously serious, and the FAA and CFM notices emphasize the importance of nondestructive tools and techniques in aircraft inspections and maintenance. With 31,600 commercial aircraft currently in service—the highest at any time in the jet age, according to the industry group CAPA-Centre for Aviation—and a backlog of more than 17,000 commercial aircraft on order, NDT can be part of an inspection program that keeps existing planes airworthy for as long as possible.

NDT also extends to the aftermarket. Aircraft operators and OEMs have aggressive sourcing programs that include parts and systems like landing gear that are surplus or overhauled and brought into serviceable condition. Some of these components are OEM-certified for quality, some are not. Either way, the demand underscores the need to verify the integrity of aftermarket components.

The FAA’s April 20 directive regarding CFM56-7B engines calls for the fan blades to undergo ultrasonic testing (UT), an NDT technique that uses pulses of high-frequency sound energy to detect surface and subsurface cracks and other defects. These pulses come from a transducer or probe, which a technician manually moves over the surface under inspection. The probe emits ultrasonic waves into the material at precise intervals and a set angle; when a sound wave encounters a defect, some of that energy is reflected back like an echo and is captured on a display for the technician to interpret.

While the FAA directive only references “ultrasonic testing” and offers no further specifics, it’s important to acknowledge that two UT methods are used in aircraft inspections today.

Conventional or standard UT: In simple terms, a conventional or standard UT probe is capable of generating and receiving a single ultrasonic sound wave; it has one element generating one wave. The focal point and angle of the beam are fixed, which can make it more difficult to locate and visualize flaws especially in components with complex geometries like engine fan blades, which in the case of CFM56-7B engines are primarily made of titanium alloy. The use of a custom-shaped probe can help ensure the accuracy of such inspections, especially when they involve complex geometries and varying thicknesses like you’d find on an engine fan blade.

Phased array UT: Phased array UT is an advanced inspection method that uses multiple individual elements (typically from 16 to 64) in a single probe. By exciting each element in a controlled manner, a phased-array UT instrument can precisely steer, focus, and scan an ultrasonic sound beam and generate two- and three-dimensional views of a flaw.

Phased array UT is capable of handling the multiple-material and anisotropic nature of CFRP (carbon fiber reinforced polymer), where defects including porosities, de-lamination, and foreign bodies can occur on the surface or within a particular layer of carbon fiber or in resin. In many cases these defects are introduced during the materials-manufacturing process, so component manufacturers conduct methodical ultrasonic testing during production and quality control. 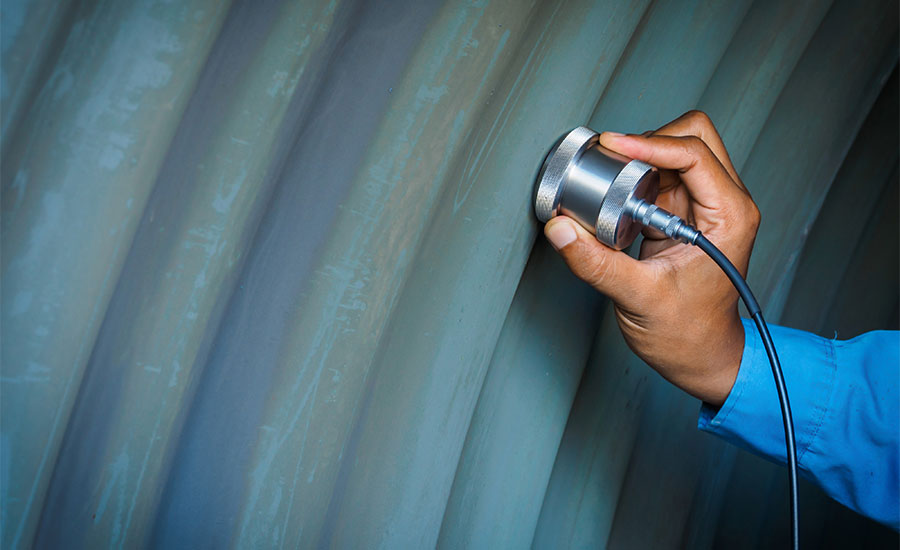 Typically phased array UT inspections take place in environments where an automated scanner can be used to precisely control the alignment between the probe and the surface of the material, and where technicians have the space, time, and powerful UT tools and software to inspect large components and complex geometries. However, the latest generation of phased array UT tools are portable, rugged, incorporate color touchscreen displays, and have powerful software onboard.

For technicians on the flight line, the challenge is to quickly and accurately detect flaws in components while an aircraft is in for scheduled work.

Penetrant testing and magnetic particle testing are generally considered affordable NDT techniques but each has its limitations. Penetrant testing can only detect surface cracks and magnetic testing is only effective for inspections of ferromagnetic materials. The inspection process for both techniques—including surface prep and cleanup—is time consuming, and test results can vary depending on the skill and patience of the inspector.

In aviation, the most effective method for detecting surface cracks and flaws is eddy current testing, which is commonly used to inspect skins, stringers, frames, rivet holes, tubing, and other ferrous and non-ferrous components. The market for eddy current NDT has developed to the point where there are probes for specific aircraft applications like rivets, lap splices, and welds. For example, a dedicated bead seat probe lets users inspect the bead seat on a landing gear wheel with only one pass.

Array probes have multiple coils in the same probe assembly, positioned at longitudinal, transverse, or off-axis orientations and firing at coordinated times. Technicians can capture more information in a single pass and dramatically increase the speed, accuracy, and repeatability of nondestructive tests, especially on large inspection areas like fuselage skin panels. Multi-coil arrays transform the eddy current inspection from a process that might last several minutes per joint to one that takes seconds.

One of the challenges for NDT technicians in aviation is that efficiency is crucial and inspection points can be difficult to reach. There’s a need for tools that have faster data acquisition speeds and can conduct dual-frequency testing, digital conductivity testing, nonconductive coating thickness measurements, and other advanced techniques—yet are physically easier to handle. Instruments today are evolving in several ways:

Ergonomics: A focus on ergonomics has produced eddy current tools that are lighter and less fatiguing to use in tight, awkward spaces. One test of ergonomics and portability is how easy it is to operate the tool with one hand—with a glove on.

Display: A handheld tool with a C-scan display can present a digital “big picture” and help inspectors find more defects in less time. A display should be large enough to handle a range of modes—for example, two signals side by side, or a reference signal and a live test signal simultaneously. A touch screen can provide additional functionality and convenience.

Software: The ability to store different test configurations within the tool are key differentiators for inspection time savings. Unfortunately, the signal-to-noise ratio (SNR) of many eddy current instruments limits their ability to detect very small flaws and loss of material that can occur in friction stir welds and multi-layer structures. The software that drives your eddy current tool should support single and dual frequency eddy current, rotating scanners, and conductivity with the viewing tools of Lissajous, waterfall, C-scan, and bar charts. Fast access to filters and the ability to manipulate signals and views for each application are also important capabilities.

As an aircraft progresses through its lifecycle and the maintenance requirements become more rigorous, NDT plays a vital role in identifying problems on the flight line before they affect uptime and the safe operation of the aircraft. The latest tools, software, and probes can help aircraft maintenance managers and NDT technicians save time and money, inspect more areas faster, and keep their assets in the air.

The Big Deal about ECA

Jesse Herrin has spent 10 years working in product management and engineering roles at Zetec, a global developer of advanced NDT tools and technology. He also has a background as a mechanical design engineer and software developer. For more information, visit www.zetec.com.

The Big Deal about ECA

Case Study: Putting It All on the Line

Key to Quality: The Impact of NDT on the Medical Community