Learn more about hardness measurement without an indenter via the magnetic measurement method.

The conventional measurement of mechanical hardness, for instance, in steel, is usually carried out using the same principle. A mechanical indenter is forced towards the surface of the workpiece, penetrating it and leaving an imprint. This imprint is measured using optical microscopy and a hardness value is determined considering the relationship between the geometry of the indenter, the applied force, the holding time and the geometry of the imprint. Depending on the size of the indenter and the force applied, a distinction is made between micro or macro hardness. In some cases, the workpieces must be pre-treated (e.g. by polishing) prior to hardness measurement. Conventional hardness measurement is difficult to integrate into production lines as the process itself is time consuming. Furthermore, traditional measurement of hardness is destructive, rendering the workpieces tested useless.

The situation is different with the use of magnetic methods. The Barkhausen noise analysis, also known as the micromagnetic method, is at the forefront of nondestructive hardness measurement techniques. The probe consists of an electromagnet which generates an alternating magnetic field. Simultaneously, it records the interaction of the generated magnetic field with the ferromagnetic material. This interaction generates an inductive current, whose strength depends on the hardness of the material. Soft materials generate intensive high amplitude signals whereas hard materials generate signals with low amplitudes. The micromagnetic method has
several advantages.

Depending on the distance between the probe and the surface of the material, a distinct volume of material is alternately magnetized and thus analyzed. In contrast to the indenter method which measures hardness locally, the micromagnetic method measures the average hardness in a volume of material. This reduces the risk of inhomogeneities such as carbides, secondary phases or non-metallic inclusions to overly influence the hardness value of the material. The penetration depth of the magnetic field and thus the size of the volume which is re-magnetized can be controlled by the frequency of the alternating magnetic field. At higher frequencies surface hardness dominates the results whereas lower frequencies yield information regarding overall material hardness. Another advantage of the micromagnetic method is the number of measurements. Depending on the excitation frequency up to 1,000 measurements per second can be made thus rendering the statistical error of the measurements very small.

Hardness measurement using the indenter method is a scale method. It provides an absolute numerical value rendering it comparable. The amount of Barkhausen noise is the result of the microstructural composition of the material measured which in turn determines the mechanical hardness of the material. 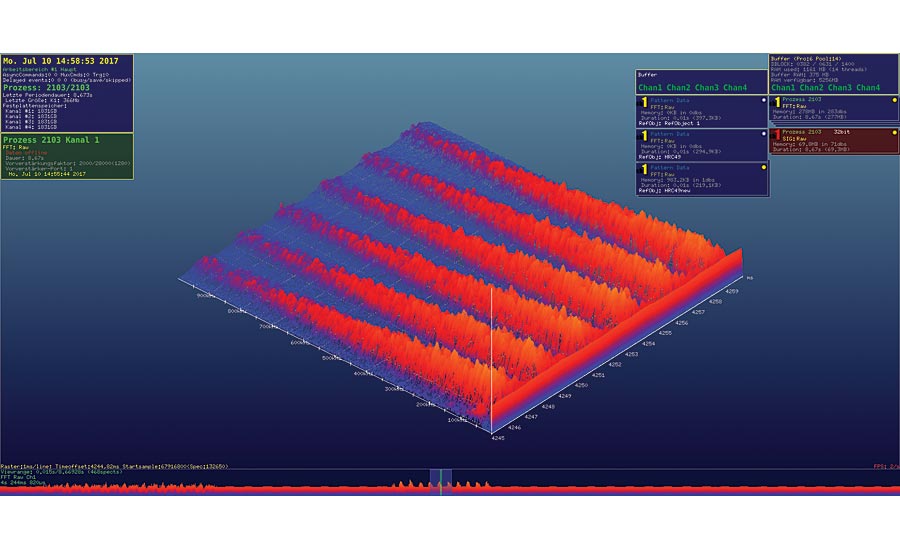 Visualization of the Barkhausen signal in a spectral landscape.

The Barkhausen noise method has been known for decades, but hardly any development has taken place regarding the analytical methods. Now a method exists to record the Barkhausen noise signal at high sampling frequencies and to perform mathematical transformations in real time. Digital data analysis provides additional advantages such as electronic signal filtering to improve the signal-to-noise ratio and the application of customer-specific analytical methods. The measurement system is stable even under production conditions.

To calibrate the measurement system for a specific hardness scale such as Vickers, Brinell or Rockwell two specimens of known hardness are required. Ideally these specimens lie on either end of the hardness range i.e. one specimen annealed and another one hardened and/or quenched. To calibrate the measurement system, the micromagnetic response (Barkhausen noise) is correlated with the hardness values. There is a linear relationship between the micromagnetic response and the material hardness, therefore unknown hardness values can now be measured for a given alloy using the calibrated system.

Hardness measurement is only the beginning

In addition to hardness measurement, the method can be used to identify undesirable changes in the microstructure, e.g. burns from grinding. As each material basically has its own magnetic fingerprint, it is also possible to check delivered goods for material mix-ups. Moreover, it is possible to determine the hardening depth. Q

The Most Common Misunderstandings about Magnetic Particle Testing