For quality, durability and safety, leak testing is critical.

Electromobility is currently one of the most significant trends worldwide, and it is destined to change the way people purchase vehicles, travel and enjoy their leisure time. Vehicles powered by internal combustion engines (ICEs) that run on gasoline are giving way on a global basis to electric vehicles (EVs) and plug-in hybrid-electric vehicles (PHEVs) that are driven to a much greater extent by large batteries. With electricity moving more vehicles, the number of these traction batteries is increasing very quickly.

Traction batteries, like most other regular-use powertrain components, are subject to aging and wear. If through manufacturing defects these traction batteries leak lithium-ion electrolyte fluid, they represent a potential source of significant danger. In today’s day and age, consumers shouldn’t have to worry about whether their expensive SUVs or sports cars might spontaneously combust in their driveway or garage. Replacing an expensive traction battery that had lost its advertised range also would not be popular.

To ensure that the electrolyte in the battery cells doesn’t escape or interact with water, automakers and battery suppliers must use modern leak-testing techniques to test battery packs and even individual battery cells during manufacturing and assembly to ensure leak tightness. Here we have provided five safety tips for ensuring tight battery seals during the fabrication of battery cells and packs.

Battery cells are one of three types: prismatic; round or cylindrical like the batteries you buy at the store for electronics; or pouches that are soft sided. Lithium-ion electrolyte and water when mixed create a volatile compound called hydrofluoric acid, which can not only compromise the integrity of the cell, but can create other issues if it escapes from the cell. Because of the volatility of the electrolyte in traction batteries, containing the electrolyte at the cell level and ensuring no leaks is critical throughout the battery’s lifetime. At the end of the traction battery’s 10-year life, the concentration of water in the electrolyte should be as low as possible, but typically no more than 80 parts per million (ppm). This is why air and water tightness are so crucial during the manufacturing process.

While direct contact with water can lead to contamination of the electrolyte, water vapor in the air also can infiltrate the battery cell if it is not tight, and build up to a dangerous point. To keep water vapor out, the maximum allowable leak size is 10-6 mbar·l/s, which is undetectable without specialized leak-detection equipment that utilizes test gases such as helium. The testing is conducted by a sensitive detector using a vacuum chamber.

Thermal Runaways During Transportation Could Definitely Be a Huge Problem!

For cost reasons, many of the traction batteries and cells used in EVs and PHEVs in North America are sourced from Asian manufacturers and must be transported to their assembly destination by cargo ship. While most battery cell manufacturers are careful in their manufacturing processes, battery cells can be damaged in shipping, with a sometimes deadly result. That’s why major airlines no longer allow lithium-ion batteries to be shipped on all passenger and some cargo planes, due to the potential for fires caused by damaged or improperly manufactured cells.

Even entire shipping vessels have been destroyed when an internal short circuit in a single battery cell causes a runaway reaction that ignites the lithium-ion electrolyte. This results in a chemical fire that can reach temperatures of up to 1,100 C and spreads to other cells in a shipping container, which can potentially result in an explosion. These types of issues which can be caused by insufficient leak testing are motivating battery manufacturers to embrace testing more emphatically.

Based on the problems automakers and suppliers have experienced in importing finished battery cells from Asia, many in the industry have suggested that the components should be subject to an incoming goods test to verify their quality and leak tightness. Optionally, suppliers could manufacture the cells themselves in North America using components—battery cells and electrolyte—imported from Asia to fill the cells, close and seal them; however a leak test still would be required to validate their tightness.

When validating battery cells, the problem areas are different, depending on the type of cells being tested:

Keep Water Out of the Battery Module/Pack Housing

A traction battery pack is a complex assembly made up of many smaller modules, which in turn are made up of individual battery cells. To ensure quality and protect against failure—including fire or explosion—some automakers are assuming the assembly process of complete battery packs from their battery suppliers.

As part of the ingress protection standards required of traction batteries by the International Electrotechnical Commission (IEC), battery-pack housings must be resistant to submersion in one meter of water for up to 30 minutes (IP67 protection class rating) and also resistant to high-pressure and steam cleaning to protect the modules and cells (IP69k ingress protection class rating). In a pretest, the (empty) aluminum cast housings need to be leak tested against a border in the range of 10-5 mbar·l/s. The seals of the assembled pack require a leak test to a threshold in the range of 10-3...10-4 mbar·l/s. Pretesting of cast housings is typically done by vacuum chamber leak testing. To be able to accurately discern leaks in assembled battery packs, a robotic sniffer leak detection system that utilizes helium or forming gas is prescribed. 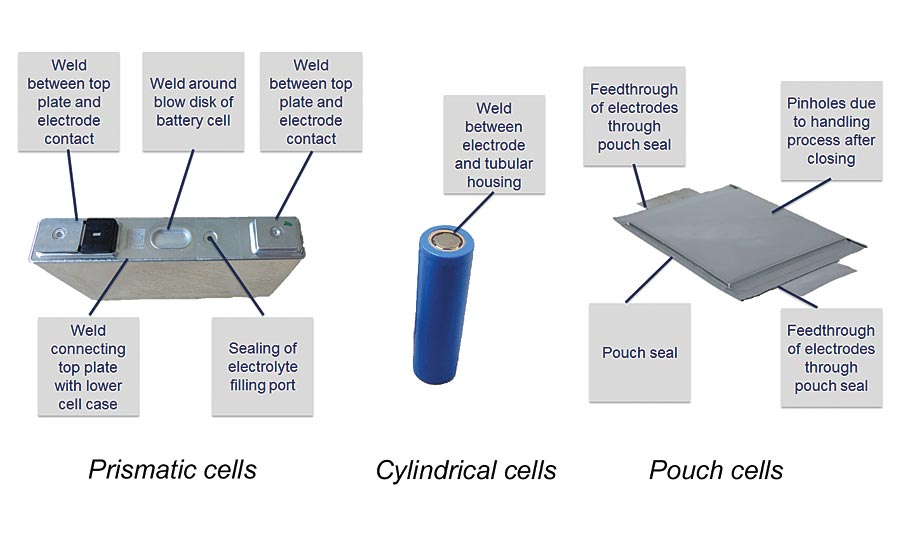 When validating battery cells, the problem areas are different, depending on the type of cells being tested.

Although battery-powered vehicles do away with many of the systems required with ICE power, the reality is that the chemical reactions that take place in traction batteries during driving and charging generate heat, and heat is the enemy of both electronic and mechanical devices. It limits performance and leads to premature failure, both of which should be avoided for the vehicle’s powertrain to live a long and efficient life. Because EVs and PHEVs both utilize a significant amount of electronic componentry in the powertrain and generate significant heat, these elements must be protected by more than passive air cooling. Traction battery cooling systems use either a water and ethylene-glycol or propylene-glycol mixture similar to an ICE or a more sophisticated pressurized refrigerant such as 1234yf.

Because of the substantial differences in these cooling strategies, tightness requirements differ significantly. When using water-based coolants, the upper limit for the leak rate is 10-3 mbar – l/s. If the cooling system uses pressurized 1234yf, the leak rate should be 10-5 mbar – l/s and the system should be tested using helium or forming gas tests.

For quality, durability and safety, leak testing of EV and PHEV components and systems is critical and should be done using modern testing equipment to the appropriate standards. It helps protect the vehicle, its occupants and others who may come in contact with the vehicle throughout its lifetime. Q

He has been a featured speaker at numerous trade conferences on topics related to battery pack design and testing, battery-cell leak detection and leak testing of battery-pack thermal management systems.

Parker joined INFICON in 2006 and previously had been the company’s leak-detection segment manager for the eastern United States. He holds a bachelor’s degree in engineering from Southern Polytechnic State University in Marietta, Georgia, and a master’s degree in business administration from Syracuse University.