It is Essential for Automakers.

Automakers in Europe, the Asia-Pacific region and the United States are struggling with performance and safety issues associated with electric and hybrid-electric cars.

One major carmaker, for example, recently postponed the release of its new hybrid-electric car due to potential battery fires. Another is facing battery-cell problems, which have led to a recall of thousands of hybrid-electric vehicles.

While some production delays and recalls have been related to debris left inside battery packs or failures in a battery’s heat-and-energy management system, other common battery problems are related to undetected leaks in battery-cell housings.

Leaks in lithium-ion battery cells can shorten battery life and deplete energy capacity. Leaks also can allow moisture to enter the battery system. Water ingress can lead to a complete failure of the battery or create a potential fire hazard.

The average electric or hybrid-electric vehicle today uses from 300 up to more than 800 lithium-ion battery cells to meet voltage and driving-range requirements set by automakers.

Implementing industry standards for testing lithium-ion battery cells is needed for a variety of reasons: 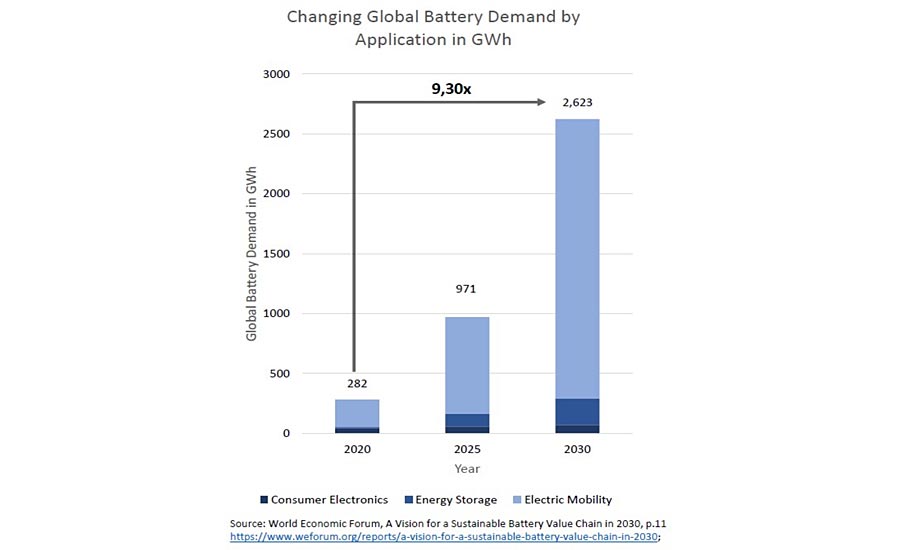 Billions of lithium-ion battery cells are produced annually, not only for use in electric, hybrid-electric and autonomous vehicles, but also for medical devices and a variety of consumer electronics products.

Global battery demand for electric and hybrid-electric batteries could grow by 900 percent or more in the next 10 years.

Annual lithium-ion battery-cell production in gigawatt hours (GWh) globally is expected to increase from 280 GWh today to 2,600 GWh in 2030. Customers will expect battery cells to function properly for years or even decades without a loss in power or unexpected failures, which will require new standards for more in-depth battery-cell testing.

It therefore becomes increasingly important for the industry to use the most reliable and precise leak-detection methods possible when testing battery cells in the future. 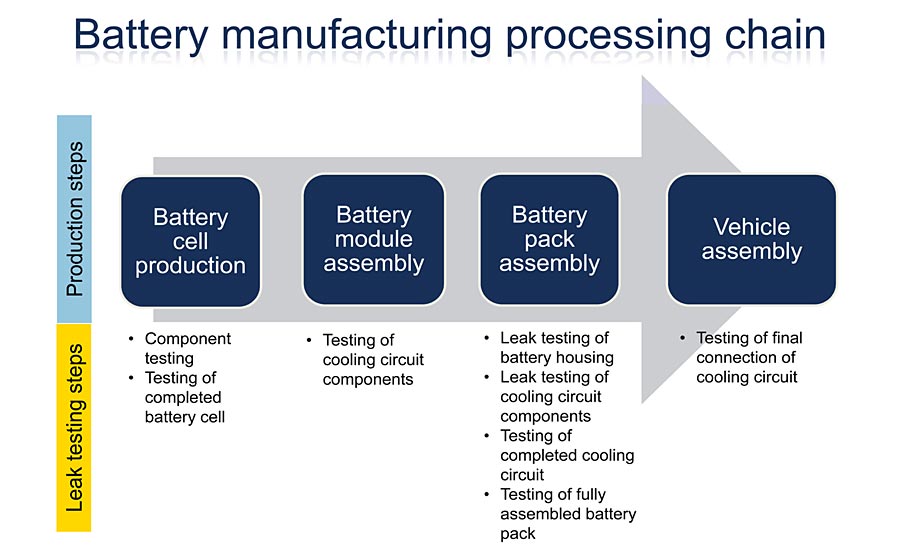 Lithium-ion battery cells must be thoroughly tested to eliminate leaks that might allow water or humidity to enter the cell, or cause electrolyte to leak out. Assuring the integrity of battery modules and battery-pack housings also is critically important. 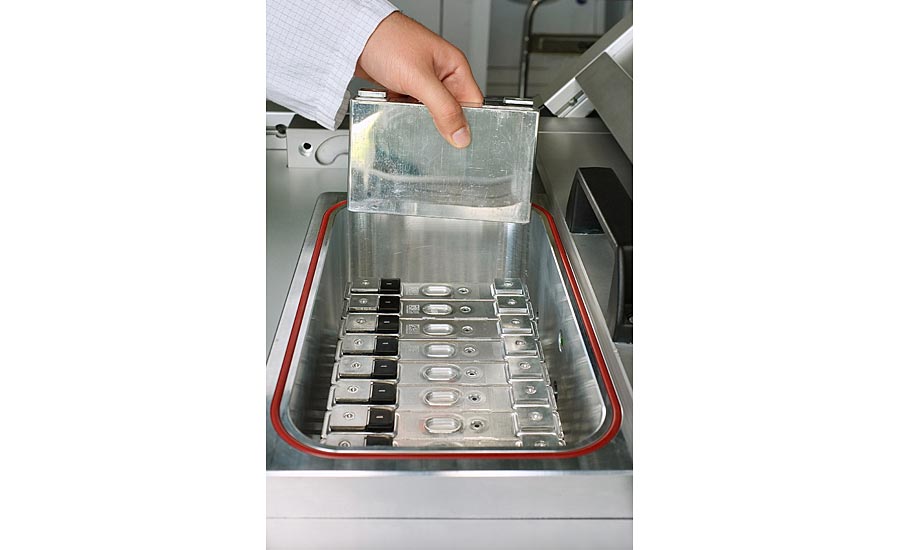 There currently are no reliable tests on which to base leak-detection standards for a full range of soft-pouch, cylindrical or prismatic cells in use throughout the industry. Pressure, helium-bombing and visual testing methods used up until now are either too slow or unreliable and may allow small but significant lithium-ion leaks to go unnoticed.

Pre-testing cylindrical and prismatic cells and cell housings (before filling with electrolyte) calls for the use of helium tracer gas and a vacuum test chamber.

Battery cells or housings are filled with helium and placed into a vacuum chamber. A leak-detection system can then measure the amount of helium leaking from the component being tested. Over a given period of time, a leak rate can be determined. For this type of test, a leak rate of 10-6 mbar∙l/s is normally used. Depending on cell type, five percent or more of the lithium-ion cells currently produced for the auto industry may have undetected leaks. New technology and quality-control standards, however, have been developed to correct the problem.

Quality control managers today are faced with a variety of leak-detection challenges. Battery cells with an aluminum housing, for example, may have a maximum leak channel hole size of about 5 μm depending on pressure conditions, wall thickness and the type of electrolyte used. But battery-cell leaks may go undetected by traditional methods because the leak-channel hole may be temporarily sealed by electrolyte within the battery cell.

The Challenge With Pouch Cells

Pouch cells are more vulnerable to damage compared to hard-case prismaticor cylindrical cells and are not suited for testing in a typical vacuum chamber where they could burst due to pressure differences created within the chamber.

A chamber vacuum of a few millibars is required to accurately test a lithium-ion pouch cell. Since a pouch cell typically cannot resist this type of vacuum, it will burst when tested.

Automakers and their suppliers, however, are expected to rely more and more on pouch cells due to their lighter weight and other cost benefits. The industry will need to find solutions for more effectively and efficiently testing pouch cells.

Adequate test methods for completely assembled battery cells, including pouch cells, have not been available until recently. INFICON, however, introduced in late 2020 new leak-detection systems based on mass-spectrometer technology. The new battery-cell leak-testing systems are capable of identifying dangerous leaks 1,000 times smaller than currently possible. They directly detect escaping electrolyte vapor instead of relying on indirect measures such as pressure indications.

A special flexible test chamber with a patented design also has been developed to support vacuum-based testing of pouch cells. The new chamber is designed to prevent potential damage to pouch cells during the testing process -- a truly non-destructive test.

This breakthrough leak-detection technology for all types of lithium-ion battery cells represents the single most important leak-detection development in the past 10 years, not just for the automotive industry but for the makers of smart phones, computers, consumer-electronics products and a variety of medical devices as well. 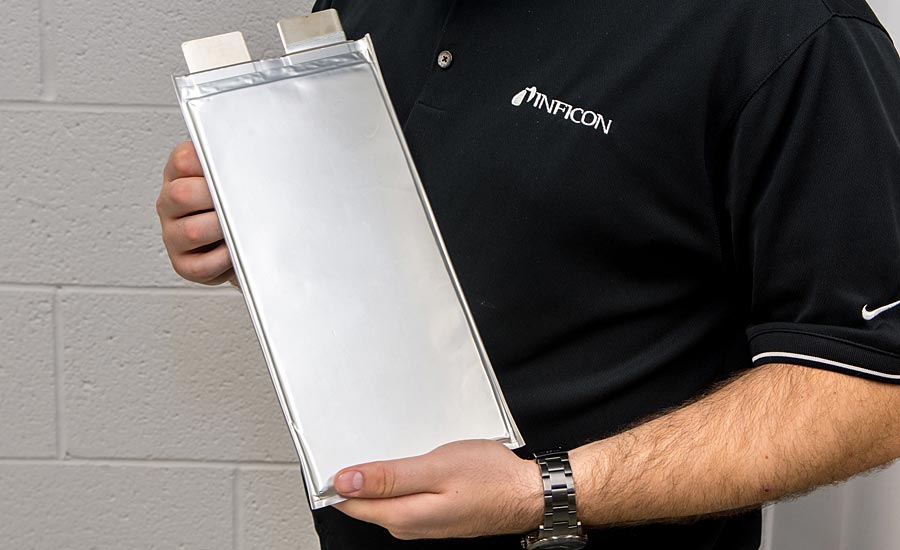 Most of the world’s major automakers rely heavily on battery-cell quality from suppliers such as Panasonic, Samsung and LG Chem.

OEMs and their suppliers in Europe, the Asia-Pacific region and North America all want to maintain high quality standards to support customer-acceptance levels for future waves of electric vehicles.

To achieve that goal, they will need to improve battery-cell test methods and support the adoption of industry quality-control standards.

The fact that each battery manufacturer produces its own version of cylindrical, prismatic or pouch cells further increases the need for reliable, uniform test standards.

Demand for lithium-ion battery cells will continue to grow exponentially over the next 10-20 years and will put additional pressure on the industry to develop quality standards and better testing methods in the coming years.

Specialized process-control software, along with sensor and other mass-spectrometer technologies developed by leading leak-detection companies such as INFICON promise to help the industry improve battery quality and will lead to pouch-cell vacuum-chamber testing capable of detecting leaks 1,000 times smaller than currently possible.

The 10 Most Common Errors in Leak Testing

He has been a featured speaker at numerous trade conferences on topics related to battery pack design and testing, battery-cell leak detection and leak testing of battery-pack thermal management systems.

Parker joined INFICON in 2006 and previously had been the company’s leak-detection segment manager for the eastern United States. He holds a bachelor’s degree in engineering from Southern Polytechnic State University in Marietta, Georgia, and a master’s degree in business administration from Syracuse University.

Daniel Wetzig, PhD, is research manager at INFICON Inc. He was instrumental in the development of INFICON’s new spectrometer-based ELT3000 technology and is internationally known for his work in the field of industrial leak-detection using tracer gases and laser spectroscopy.

Based in Cologne, Germany, he directs INFICON’s leak-detection research and development activities after having progressed through the company’s R&D organization as an engineer, technical specialist and project manager.

Wetzig has authored numerous papers on industrial leak detection and holds several technology patents. He has a degree in physics from the University of Duisburg-Essen and a doctorate in surface science from Westfaelische Wilhelms University Muenster.

The 10 Most Common Errors in Leak Testing