A significant investment in key technologies ensure that high safety and quality requirements are met.

Energy storage systems play an important role in the electrification and decarbonization of road and rail transport. Efficient energy stores are a fundamental requirement for the operation of e-buses and e-trucks, and, for example, allow braking energy generated by recuperation to be stored. By integrating energy storage systems into vehicles, diesel trainsets can be converted into diesel hybrid vehicles, cutting CO2 emissions by up to 30%. This technology thus offers transport operators many options for retrofitting their vehicle fleets in order to achieve more sustainable mobility.

The handling of live and sensitive battery cells not only requires high precision and repeatability but also maximum safety for the workers involved in the production process. ABB relies on its own technology and know-how to ensure that these requirements are met. Its experts from around the world joined forces to design a complex assembly and welding plant featuring two ABB robots—IRB 6620 and IRB 4600. One of the robots places the battery cells in the module housing while the other joins them in a highly precise laser welding process.

It takes great dexterity and precise force control to assemble the module housing. Not only that, the robot in the assembly cell also has to complete various tasks in rapid cycles right at the start of the process. After the worker has inserted the cells embedded in polystyrene containers into the enclosed system via a tray, the IRB 4600 six-axis robot springs into action. First, it scans the QR code of each individual cell with a camera then it carries out an incoming goods inspection by measuring the voltage. If there is a disparity with the measured value, the battery cell is rejected automatically. The robot also checks for correct polarity and turns the cell if necessary.

After this, the robot picks up the cells and inserts them into the appropriate module housing using a tactile gripper, specially designed for the task. Great precision is required here as there are only a few millimeters between the live lithium ion cells, and they must not be allowed to come into contact with one another. The gripper’s design with a stamping mechanism makes this possible.

The system is designed so that very little manual intervention is required and a safe human-robot work environment is ensured. Scanners recognize when the worker has inserted the battery cells and module housing into the trays. This is also the case before the cells are welded. Once a module has been fully assembled, the worker can open the drawer, attach the corresponding connectors and close the drawer again. The robot then transports the module into the laser welding system where the cells are permanently joined by remote laser welding. And that’s how a long-lasting battery module is created.

The system can produce up to five modules an hour, which saves an enormous amount of time, compared to the manual process. It would take at least one hour just to weld the module by hand – to say nothing of the unparalleled accuracy of the weld seam, which the robotized process produces. What’s more, voltage measurement and reverse polarity protection are fully tested. 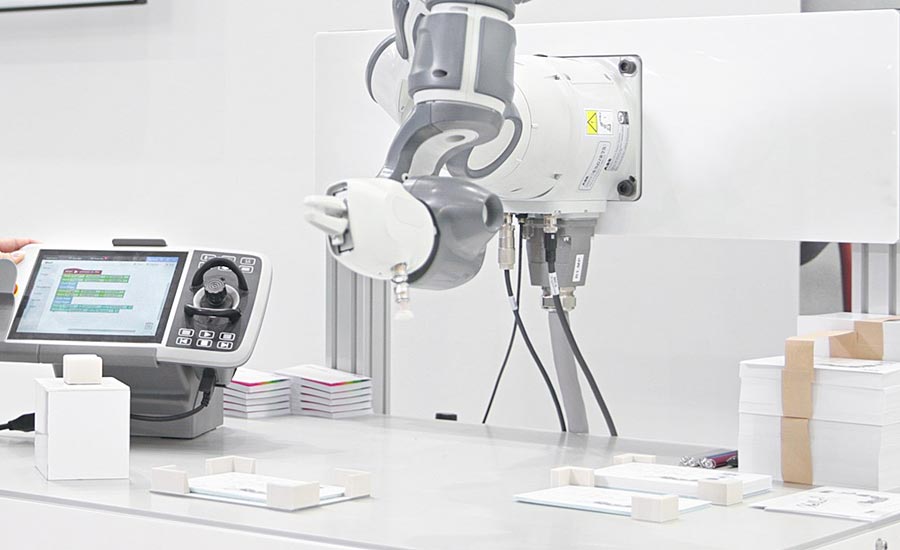 Smooth Commissioning Thanks To Simulation By RobotStudio

The plant was put into operation virtually before commissioning in order to identify and eliminate any potential faults that could have occurred at the start of production. In the process, ABB drew on its own know-how and used its own simulation and offline programming software, RobotStudio which is based on Virtual Controller, an exact copy of the original software that controls the robot. The digital twin enables realistic simulations to be created as it uses the same data and configurations as those used in actual production. RobotStudio does not require any extensive programming knowledge.

A particularly innovative element is the fact that RobotStudio is also connected to the virtual PLC via an interface. This made it possible to consolidate both systems in a virtual test environment, to analyze potential faults from all angles and remedy them at an early stage. This resulted in a faster and trouble-free commissioning phase. Another advantage is the way in which the highly complex system communicates with the supervisory control system. This is done using the open communication standard OPC-UA – a trailblazing technology for the factory of the future, which enables huge amounts of data to be transmitted quickly and, above all, securely.

ABB’s Ability™ Manufacturing Operations Management (MOM) suite is used as the Manufacturing Execution System (MES). This software supports the user in managing the plant, analyzing data and carrying out reporting. It also ensures that the data recorded during the production process is reliably and safely stored, and transmitted at high capacity.

Handling sensitive lithium ion cells with a high energy density is no easy matter. If manipulated incorrectly, the cells can break or—in the worst-case scenario—even catch fire. Therefore, when designing the plant, in addition to highly precise and reliable processes, great attention was paid to developing an intelligent safety and fire prevention concept. This was particularly important because if a fire breaks out, conventional extinguishing measures are not enough. That’s why the plant is fitted with several extinguisher generators, which contain a special aerosol mixture that can put out a fire in a matter of seconds.

At the end of the process, the fully assembled battery modules are combined into energy storage systems in the new ABB production plant and configured according to each specific application. ABB plans to manufacture up to 10,000 modules a year at the plant and aims to further expand its sustainable mobility product range. The automated process offers the necessary flexibility, scalability and safety to achieve this. The company also intends to further increase the level of automation in its upstream and downstream production steps.