For most manufacturing firms, skilled labor was incredibly scarce before the COVID crisis struck.

High-mix, low-volume (HMLV) manufacturers have faced extensive challenges when it comes to automation. The need for detailed planning, programming and jigging that comes with most automation systems (especially robotics) makes them fundamentally inflexible in adapting to the varied parts, processes and work methods that HMLV manufacturers need to get the job done.

This leads to a reliance on skilled human labor, but there are three problems here: skilled labor is scarce and only becoming more so, skilled labor is still prone to the same faults of fatigue, boredom and inconsistency that every human being has, and attracting skilled labor requires better pay, better benefits or better quality of life that can all - with the wrong systems - make production fundamentally unprofitable in a globally competitive economy.

The consequence of this fundamentally falls on the quality of work and the frequency of rework - both of which offer the most unpredictable impact on any HMLV firm’s bottom line. Unsatisfactory orders and unreliable outputs can all put consistent business at risk while also incurring unexpected added costs that can leave management in the lurch.

How to address this? Autonomous robots can help in a few ways: their added consistency and uniformity can maximize the quality of output. Robotic capacity can further amplify the productivity of existing skilled workforce. And finally, autonomous robots can allow for new parts and offerings to be added to production without significant incremental costs.

Robots, when well programmed and operating on positioned parts, are known for unparalleled consistency and uniformity in any application or process. At the same time, automated machine control and machine vision systems are often used for specialized applications where - within specified and repeatable constraints - a robot can judge and move independently to achieve a goal. Think of a picker robot standing over a conveyor belt or a welding robot working on a unique portion of a large, asymmetrical component.

To take this to the next level, autonomous robots can use sensing mechanisms - whether it’s infrared, laser or contact sensors - in order to identify the surface of parts or the joints between them and then develop their own plan according to what is in front of them. How does this work? A massive amount of processing power is required, but ultimately even that power is minimized by using the right AI-based technology to prioritize the segments of each and every part and - with process know-how in hand - respect the constraints of the process, whether it’s welding intensity, machine finish quality or paint thickness and coating coverage.

Finally, because an autonomous robot can do this for any number of processes in the same way that we expect self-driving cars to perform once fully operational. The great thing here is that this technology is already online for manufacturing robots, given that their environments are more constrained and certainly less “unpredictable.” 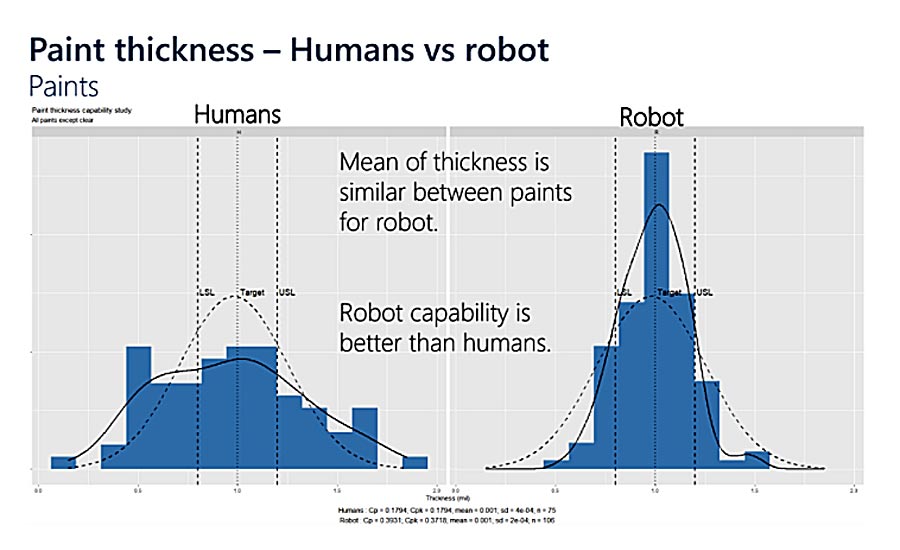 Seen above, a real internal study result from an aerospace company. Because autonomous robots are able to generate and follow a detailed program down to the finest detailed, the ultimate finish consistency is unparalleled. Source: Omnirobotic

Robotic Capacity Comes To The Rescue

For most manufacturing firms, skilled labor was incredibly scarce before the COVID crisis struck. Thanks to the short term drop in demand that will continue until the economy has fully recovered, the shortage is still present, but the pain of lost profits is less acute. At the same time, however, many productions will still hesitate hiring a second or third shift because they simply cannot find, train and retain enough consistent workforce to manage a profit. The risk remains that as the economy recovers, these firms might not.

Although there are many demographic and economic factors which have caused this, the reality is that these challenges can and will not be addressed in the short term. While manufacturing robots in mass production processes are generally considered as labor-replacement, this is simply not the case for autonomous robots. The shortage of labor is so acute in HMLV manufacturing - the sector that most benefits from autonomy - that robots will only serve to augment labor and potentially lead to an expanded workforce due to productivity and profitability benefits.

In this context, robots don’t automate jobs - they automate tasks that offer most vex and belabor the most skilled workers. This doesn’t just alleviate productivity shortage, but the challenge to recruit new employees and getting them to more easily see their future in manufacturing, allowing for a more engaged and satisfied workforce than ever before. 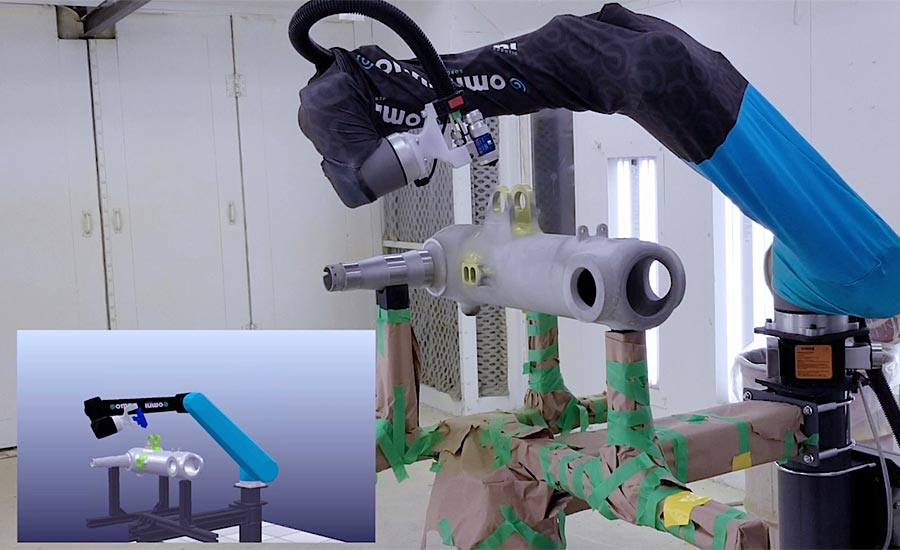 Above, an autonomous manufacturing robot paints an aerospace part through a process of localization with a simulation generated from a CAD file. Yes, even for high-precision parts, this system can work on pre-validated programs that actually required zero human contribution, making a robot as simple to operate as a CNC machine. Source: Omnirobotic

The challenge with this technology is in part simply understanding where all the benefits can be applied. For standard spray processes, the payback period is commonly found to be one year or less. When all the benefits in terms of productivity gain, quality improvements, reduced rework, reduced energy or consumables waste and improved labor circumstances are taken into account, the total benefit of the solutions are still not reached.

What does this mean? While, for instance, the technology already exists to address robotic spray processes with autonomy, more processes and applications can and will work autonomously in the future. This can offer quality improvements no matter what cell you’re trying to update next, and at the same time allows for changeover and re-engineering of solutions with minimal added costs going forward.

Ultimately, this kind of technology puts more power in your hands to update your processes as is needed - something that hardly comes with traditional automation solutions. More to the point, the more transferable this technology is between existing available hardware, the better a manufacturer can maintain flexibility and adapt to new needs going forward.

Autonomous Robots, Now And In The Future

The most recognized autonomous robots of today and in the autonomous mobile robots category, but this offers little benefit to value-added processes directly, and may only offer slight benefits in terms of optimizing material handling.

What is most important to understand is that with new advancements in AI and sensing technologies, it is now possible for any machine to become part of an autonomous manufacturing approach that liberates so many firms from the typical P&L challenges that come with any manufacturing process and instead focus more of their attention to design, planning, customization and the kind of innovations that customers will really want next.