Manufacturers should be aware of the many standards for this technology.

Shane Collins often hears people say that there aren’t any additive manufacturing standards. This is frustrating because he’s worked on additive standards for more than 10 years and there are dozens out now.

According to ASTM, the ASTM F42 committee has developed 31 standards to date, with another 40-plus in various stages of development. The first ASTM standard for additive manufacturing technologies was published in 2009.

The first ASTM standard for Additive Manufacturing Technologies was published in 2009 – yet many people aren’t aware that these standards exist. Terry Wohlers, president of Wohlers Associates Inc., explains how additive manufacturing standards have affected the industry thus far.

“Industries do not grow big and strong without strong standards,” says Terry Wohlers, president of Wohlers Associates Inc. and chairman of the ASTM F42.91 Terminology Subcommittee in 2009 when the standards got started.

Additive manufacturing standards continue to advance, and the ASTM F42 committee continues its work with a virtual meeting this month. It will be held May 10-21.

How It All Started

“SME decided that standards are important to help develop a fairly young industry,” Wohlers says, and then identified ASTM as a candidate to get these started.

Later ISO and ASTM began working together to pool resources—a first for the organizations—to get the process going. While the groups have made a lot of progress, there are still not an overwhelming number of standards when you consider that “other established industries may have hundreds of standards,” Wohlers says.

For those who don’t think the industry has any standards at all, Collins says that the confusion stems from the fact there is no public database of material properties for additive manufacturing as there is with other methods of design. For example, if you wanted to design a part with titanium that could withstand 500 degree temperatures, you would know how to proceed. The same cannot be said for additive.

In addition, Collins says there is another issue at work. Engineers are being asked about using additive manufacturing by their CEO who has seen an additively manufactured Stradivarius or GE fuel nozzle, and then asked their team, why aren’t we using it? While today it may be more visible at large corporations, this will change, Collins says. “Additive manufacturing is not just for the Boeings and Lockheeds of the world,” he says.

In other words, he thought manufacturers may have been using the absence of standards as somewhat of a crutch when they say they aren’t able to use additive. Once a standard is released they will not be able to fall back on that excuse. As the industry continues to grow, the challenge will not be lack of standards. It will be learning about how to get started.

“This qualification/calibration of powder bed fusion machines for aerospace applications is kind of a bellwether for us,” Collins says, “as it sets the groundwork for factory acceptance tests, new equipment that comes into the market. It’s an important standard, the first of its kind in the additive manufacturing space.”

Meeting the requirements of the quality system is the goal of additively manufacturing parts, Collins says. As aerospace quality needs to be top-notch, these parts must be the highest level of quality.

“Additive manufacturing is considered a special process,” Collins says, “material properties and the part come together at the same time. Slight variations in the process have dramatic effects on the performance of the part. We have to control all the variables and be able to reproduce materials and create materials the same way.”

This requires looking at initial quality, operational quality and part quality. And for those looking to get into additive, they have to know how to qualify the process, Collins says. 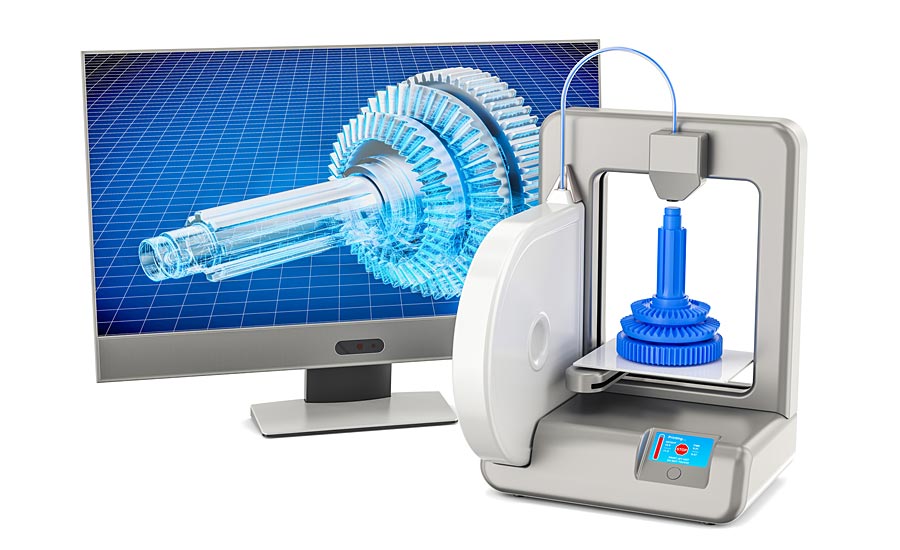 Standards continue to move forward, but it can be a lengthy process. “Standards development is a volunteer army,” says Carl Dekker, a past chair of the ASTM F42 committee on standards for additive manufacturing as well as the president of Met-L-Flo. “The majority of it still needs to come from a members’ consensus basis.” With ISO, he notes that this may be a two-year process to ensure errors are caught and that the standard has value. But with a collection of volunteers with full-time jobs, the process takes time. And, he notes, “COVID is not making that easy.”

First the ASTM technical committee will work on a draft, then the main committee will look at it. Then comes a review process and then getting it published. Of course, from there you still have to get people to adopt it. Dekker notes that it takes a while longer to get industry to embrace it. Still, he describes the F42 as making “amazingly fast progress.” With about 12 years of work and a few dozen members, now they have more than 1,000 members and “a massive amount of contribution from people in a relatively short amount of time.” He notes the question is still how quickly a standard will be embraced by the industry.

In terms of industry, he says the committees are digging into specific areas like aviation, maritime, electronics, construction, oil and gas, and consumer-related areas. They also are looking at specific materials such as metals, polymers, and ceramics. “It’s kind of like a number of different things converging at the same time,” Dekker says. “It’s exciting, in the future, you no longer have to be a Fortune 50 company to manufacture with additive manufacturing.” With standards, smaller companies can assure customers they are purchasing a safe and reliable product, he says.

The terminology standard can also help companies understand the processes better, Wohlers says. “Imagine someone who is relatively new to the industry and people are using as many as three or four different names for the same process. It’s just confusing. So the terminology standard in my view is very important when communicating in person or in writing.”

Where is the industry going next? The timeline for standards is always uncertain. “It’s not like flipping a switch,” Wohlers says. “It’s a gradual thing where as more standards are developed and more are adopted then it will be more on the radar of various organizations around the world.”