Remote Visual Inspection an Important Part of the NDT Toolbox

By Gregory James Weaver
✕
Remote visual inspection (RVI) is a nondestructive testing (NDT) technique used for the visual inspection of an object where the person performing the inspection operates a piece of equipment from a distance. The piece of equipment can be very basic, like a mirror or pair of binoculars, or it can be complex, like a drone equipped with high resolution video cameras. The inspections can range from a simple enhanced visual view, such as magnification through binoculars, to a very detailed high-definition live camera view of a small section of a larger assembly. These types of inspections are mainly used in areas of interest that are otherwise inaccessible or when the inspection area is just too dangerous for human access.

RVI would seem to be a somewhat modern technique as it requires “equipment,” but the history of remote visual predates the industrial revolutions. In fact, natural reflective surfaces like polished rock and a still body of water have been used to remote view things like the sun since the beginning of human life.

One of the oldest types of RVI equipment that is still in use today dates back to 1608. Hans Lippershey of the Netherlands, an eyeglass maker, filed a patent for what would later become known as the telescope. He was not awarded the patent, but his invention would lead to what were the first RVIs. The following year Galileo Galilei brought his design ideas to the telescope and greatly improved its functionality.

The history of Galileo’s contributions to science and astronomy is well recorded. But, did you ever draw the conclusion that those accomplishments were also the beginnings of an NDT technique? In its most basic form, he was just visually inspecting objects in space remotely using his enhancement device. Several decades later another historic figure, Sir Isaac Newton, added to the telescope by adding in a reflector to make viewing easier. RVI has some legitimate historical credibility.

We have come a long way since those historic times. Cameras are getting smaller, have more resolution, and are cheaper every day. Our ability to be remote also seems to improve at just the same rate. There does not seem to be many things that a modern engineering team cannot accomplish. In early 2021, we were able to watch high resolution video of the Mars rover Perseverance’s descent, lowered by sky crane, and landing on another planet that is nearly 136 million miles from Earth—an amazing feat that would have made Galileo proud. This is just one example of the extreme upper end of the RVI technique, but it shows us just how advanced it has become. 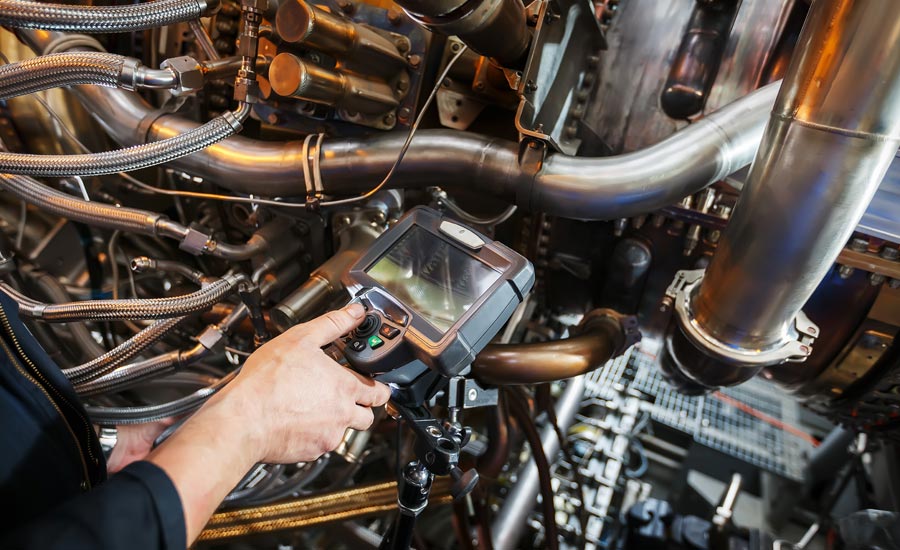 RVIs are performed across every major industry and they provide critical information for evaluations and research. There are many ways of applying modern RVI inspections. However, as we are focusing on quality, most of the inspection applications used for quality purposes are carried out using three main types of equipment: borescopes, unmanned aerial vehicles (UAV), and crawler robots. Each of these can be equipped with cameras, video, or laser measurement devices. Each has its advantages in specific conditions and situations.

The most common and widely used piece of equipment for remote visual inspection is the borescope, which is also called boroscope in many industries. A borescope is defined in Merriam-Webster as “an optical device (such as a prism or optical fiber) used to inspect an inaccessible space (such as an engine cylinder).”

These devices are designed to provide access to limited and/or tough to reach areas. They consist of either a rigid or flexible tube with an objective lens, camera, or video on one end and eyepiece or digital display on the other. These two ends are connected by either a pure optical or electrical system. Most of these systems are typically accompanied by an illumination source that provides enhanced brightness and contrast to help with viewing. The rigid or flexible borescopes are usually connected to a photography or videography device. These devices are inserted into small tight areas like aerospace and gas turbine components and intricately designed additively manufactured parts. They are also used in many assembled systems where access has been limited due to the designed meshing of all the components. In the medical field they use similar instruments called endoscopes. The technology is very similar if not identical in many cases.

Another device that is becoming more and more common for RVI is the unmanned aerial vehicle (UAV). The UAV is much more commonly called a drone, and these have advanced over the last 15 years or so. These advancements have helped to make the drone a key piece of remote inspection for many industries. Drones have routinely been incorporated into many inspection protocols that are conducted at otherwise inaccessible and often dangerous elevations.

Many of the inspections were previously performed using lifts, cranes, rope access, and sometimes simple binoculars. A UAV has a quite broad definition due to many military applications, however in the inspection aspect, this definition works well: a flying robot that can be remotely controlled or flown autonomously through software-controlled flight plans in their embedded systems. Like the boroscope, the drone can be equipped with cameras, video, and other sensors.

Drones are being used for many bridges, dams, buildings, and stadium inspections. They are not just removing the danger of these types of inspections, they are also often improving inspection resolution and can bring new sensitivity to the applications. Drone inspections are becoming widely implemented and they will continue to do so as the technology advances. 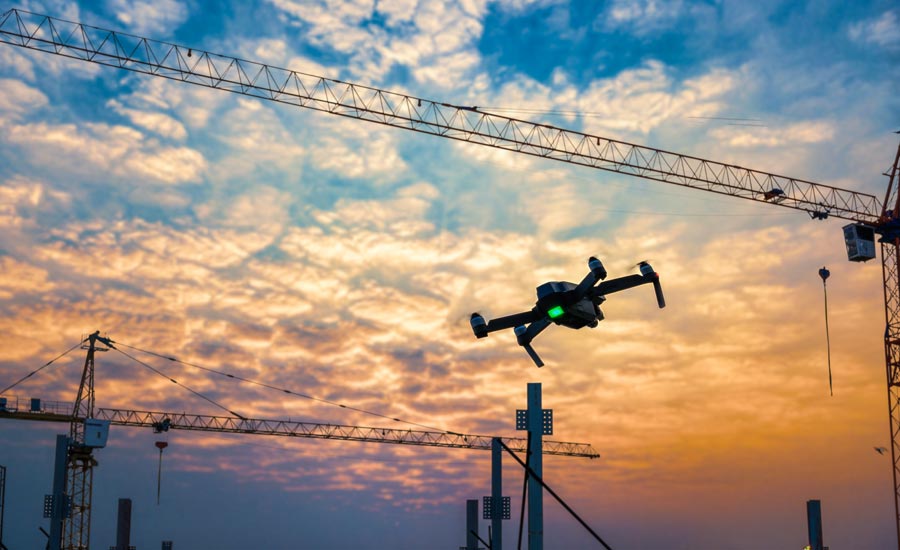 Inspection drone. Drones have routinely been incorporated into many inspection protocols that are conducted at otherwise inaccessible elevations. Source: Weaver NDT

A final important piece of equipment for RVIs are robotic crawlers. Robotic crawlers are used in pipelines, power plants, tanks, and other commercial applications. Many industrial pipes and tanks require routine inspections and most of these can only be performed using crawlers. A robotic crawler is an ideal inspection device where long distances need to be traveled to complete an inspection. These types of inspection devices operate much like a remote-controlled car and can be equipped with nearly all types of digital media devices. Crawlers are the go-to RVIs for sewer pipes, contaminated areas, volatile gas tanks, and nuclear power plant inspections.

The crawler is an essential piece of RVI equipment that has provided inspectors remote access to hazardous and unreachable areas for decades. They continue to be enhanced through modern technology developments and should drive more and more viable applications in the future.

Remote visual inspection is an important part of the NDT toolbox and it has provided key inspection data while maintaining safety for its operators. The three pieces of equipment discussed—boroscopes, UAVs (drones), and robotic crawlers—are some of the most utilized in the technique. But, there are other pieces of hardware with inspection capabilities as well.

Although there will always be technological advancements in the future, often something as simple as a mirror or a lens in a telescope can be considered equipment for remote inspections. Just ask Galileo.

Without going into the full capabilities of force testers and material testers, the intent of this article is to steer future buyers in the right direction while providing basic guidelines towards making the right decision, with the best supplier able to meet their present and future testing needs.