Manual or human manipulated NDT is still the primary means of performing Nondestructive Testing (NDT) in unique or one-off applications. Mechanical aids and/or computer assisted manipulation and scanning devices can reduce data gathering time on the site of the item being inspected.

Digitalizing data for everything that can be thought of is a continuing trend. The computer can then perform analysis above and beyond the human analysis of analog data.

Automated or semi-automated inspection maximizes efficiency for performing NDT of repetitive or continuous inspections. This is a mechanical improvement trend that has been going on since the beginning of specialized manufacturing processes. The industrial revolution has been based on this fact for a hundred years. Computers make the process even more efficient. Robots have replaced manual skills at an ever increasing rate.

Artificial intelligence (AI) is intelligence demonstrated by machines, as opposed to the natural intelligence displayed by animals including humans. Leading AI textbooks define the field as the study of "intelligent agents:" any system that perceives its environment and takes actions that maximize its chance of achieving its goals.

AI will offer the ability to auto-recognize defects from Closed Circuit Television (CCTV) inspections from multiple NDT methods. This allows the ability to produce an accurate grade for the condition of piping, wire, parts, circuit boards, bolts, machined products, etc. AI has the potential to produce this data more quickly and accurately than the human eye does. Major financial saving can result from reducing human expertise and replacing it with Artificial Intelligence. The goal is to reduce false positives, increase confidence in true positives and improve speed of inspection at the same time. However, the human elements are not easily replaced for one-off applications not suitable for automation.

Blue tooth communications over relatively short distances reduces need for extra people on a team or extensive use of wiring as data communication method. Bridges, buildings, ships, and other structures can be monitored by continuous monitoring devices. Long term data can be fed to centralized computer systems that feed the sensor data back via blue tooth to a local accumulation station. From there the inspection data can be fed to a central data evaluation center. This could be ultrasonic data from a bridge beam. corrosion monitoring on a pipe or vessel, eddy current testing data from thousands of tubes, acoustic emission from thousands of wires in a cable of a suspension bridge or other similar applications. 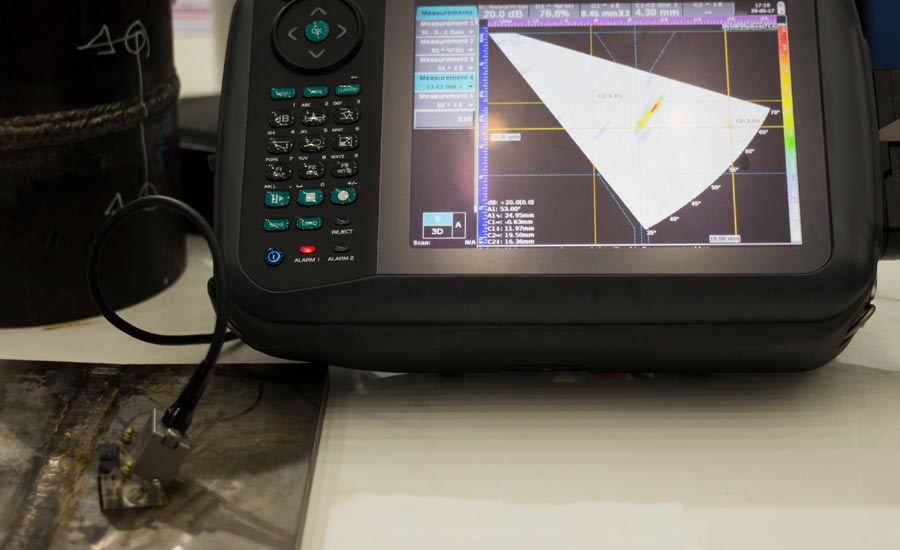 Ultrasonic Testing by phased array transducers is the biggest difference to come along in recent times. The big difference between conventional UT and phased array UT is the transducer. Conventional UT’s use single-element transducers or paired element transducers, one for transmitting and one for receiving, to generate and receive ultrasonic sound waves. When using a single frequency and angle ultrasonic transducer multiple change out of the transducer and angle wedge utilized would be needed to achieve maximum coverage and optimum angle to best reflect off the surface of the discontinuity being sought. Very time consuming at best. With Phased Array UT the single pass over an area of interest can yield multiple angles and frequencies to assure the optimum ability to detect various oriented and surface reflective conditions needed to detect discontinuities.

Automated ultrasonic testing (AUT) uses mechanized scanners that are computer controlled to move transducers over the surface of the material being inspected. As the transducer moves, the computerized system acquires ultrasonic inspection data from a predefined programed pattern. 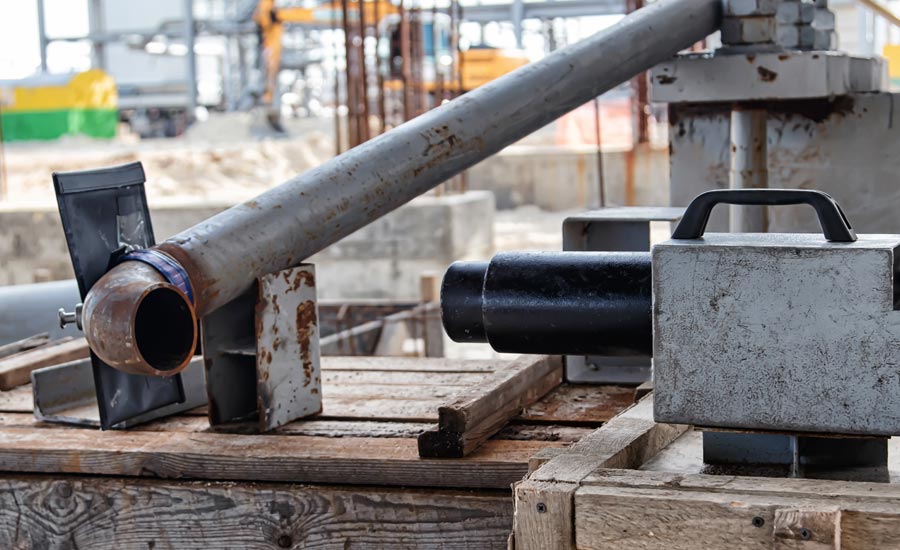 Film radiography from the days of Madame Curie has been replaced by Imaging plates and readers. The days of acetate based film being read in front of bright light sources are gone.

Computed radiography (CR) is the most common method of producing digital radiographic images and the first technology that was commercially available.

Digital Radiography, also known as direct digital radiography, uses x-ray–sensitive plates that directly capture data during the patient examination, immediately transferring it to a computer system without the use of an intermediate cassette as is the case with CR. This save steps and consumable materials. 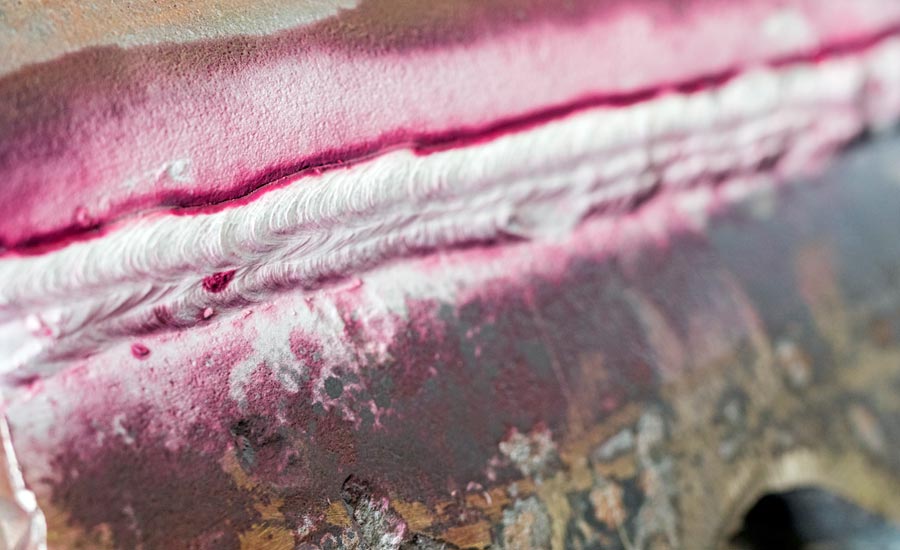 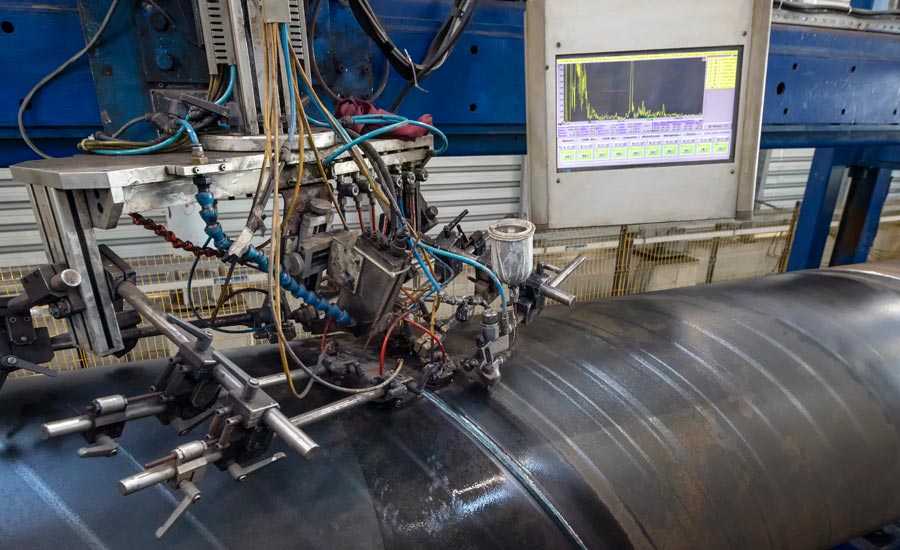 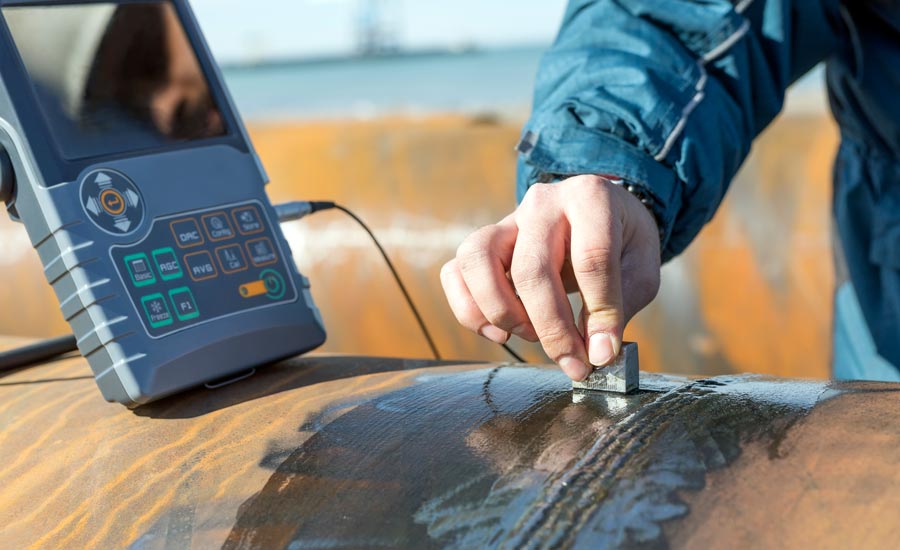 Automated Inspection Eddy Current is ideally suited to inspection automation particularly of so called rotationally symmetric components as it is a non-contact technique where coupling is not needed and no-effluent is produced.

The IRIS system is a single channel ultrasonic scanning system with the ability to inspection tubes in a wide range of diameters. 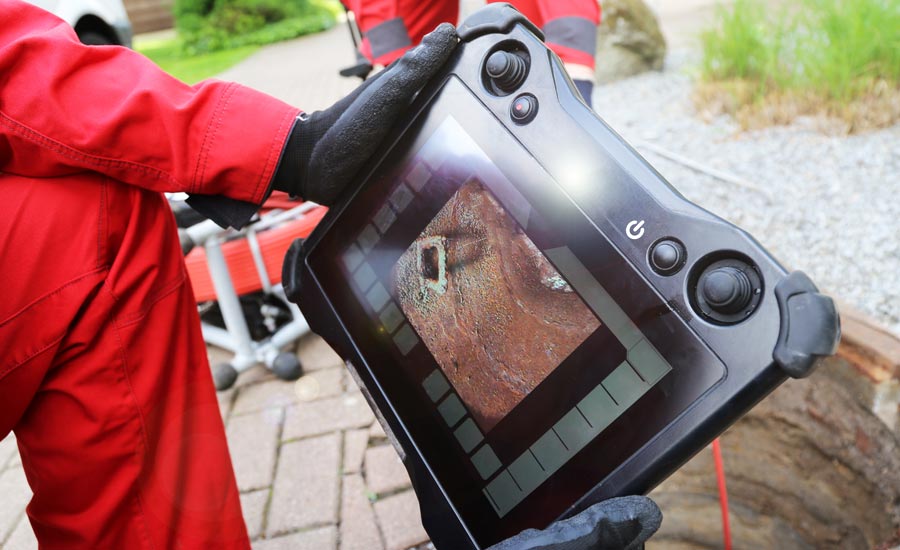 Several industries have utilized RVI/T including borescope (rigid and flexible) and videoscope.

Sanitation system piping has been inspected by rover wheeled devices.

Electric power plants, regardless of heat source (nuclear/fossil/thermal) used to make steam are made up of heat, pressure and water transfer systems, including vessels, valves, pumps and piping internals. These systems, components and parts have been inspected in the energy field by RVI/T for decades also.

Nuclear power plants utilized remote visual testing for the In-Service Inspection (ISI), ASME Section XI programs. This includes reactor vessel internals and removable components which are inspected by remote underwater cameras. Some on a pole and some within remote operating vehicles (ROVs). The top of reactor vessels (PWRs) have been inspected by RVI crawlers looking for leaking control rod penetrations in high radiation areas with hard to access configurations.

Electric Power Research Institute (EPRI) pioneered developing Visual Examination for ISI applications with VE-101, 102 and 103. In the 1990s VT-1, -2 and -3 were addressed in great depth with a total of 104 hours of training. RVI/T was addressed for the inspection of piping, pumps, valves, reactor vessel internals and removable significant components of reactor vessel internals. Borescopes, fiber-scope, videoscope, cameras, underwater cameras and ROV mounted cameras were all applicable to nuclear power plants.

Any system or component of any size that has the misfortune of loose parts falling into unwanted spaces have called upon the expertise of remote visual inspectors with the special skills of a puppeteer and abilities to operate with indirect images to retrieve the loose parts.

Wind turbines means of power generation are commonly inspected with videoscopes to assess the condition of the transmission gears for wear in hard to reach gear boxes.

Maritime ship propellers at the four corners of a ship are oriented down into the water and have similar gear boxes as wind turbines. They receive similar RVT videoscope inspections for the same problems of wear and alignment of the transfer gears as do wind turbine oriented upwards in the sky.

Bridges, electrical high tension lines, damns and other altitude challenging objects have in recent years been inspected by remote visual methods carried aloft by drones. This is an application gaining much great acceptance and gaining access to inspect areas previously very expensive to scaffold up or hang down to see.

The goal of using RVI in an indoor inspection (i.e., for a boiler, pressure vessel, chimney, or some other asset that requires entry) is to give inspectors are the primary ways companies save by using indoor drones for inspections

An RVI tool could be something as sophisticated as drone for internal inspections, or it could just be a camera hanging from a piece of rope.

Of all the RVI tools available to inspectors, indoor drones provide several benefits for NDT.

It is a way to collect data inside an asset without having to put themselves in harm’s way by entering it or having to stand on scaffolding inside of it.

Labor shortages in the current economic times are greatly magnified when the labor in question is skilled trained labor. The need to emphasize non-college degreed career paths cannot happen fast enough. Notwithstanding the need for most occupations in the skilled craft categories also need some college. More and more the need for an Associate Science degree for the field of nondestructive testing is obvious.

As long as the supply of qualified personnel is inadequate to meet the needs of industry there will be efforts to automate and utilize artificial intelligence to perform and evaluate NDT. Ironically, the greater the quality of personnel performing NDT the greater the compensation commensurate with that increased education and skill will be. Therefore, the greater the pressure to automate and use artificial intelligence to substitute for the human inspector. Economics of supply and demand will decide the direction of the future. The trend is established I believe.

Michael W. Allgaier is director training and certification for the Mistras Group Inc. (Princeton Junction, NJ). For more information, call (609) 716-4000 or visit www.mistrasgroup.com.
You must login or register in order to post a comment.