The goal of PAL lighting is to enhance diffiult-to-image flaws so machine vision software can evaluate them.

Lighting selection and setup play a critical role in the success of a machine vision application. Vision systems rely on specific types of lighting to optimize contrast or to highlight a specific feature of interest. Developing an effective lighting system can be a difficult task, requiring the testing of multiple types of lights and cameras. Patterned area lighting (PAL) simplifies some of these difficult imaging problems on reflective, transparent or semitransparent materials by combining 2D and 3D qualitative methods into one image.

For years, detecting flaws on reflective surfaces and transparent objects has been difficult and costly, putting solutions out of reach for many users. When a defect has many variables, including size, direction and shape, making a positive identification becomes difficult. Vision systems only make decisions on what they were programed to evaluate on a very discrete set of rules or parameters. A difference between a scratch, scuff or other defect may be obvious to the trained eye of an inspector or quality engineer but becomes more challenging when seen through the lens of a discrete inspection system using machine vision. The goal of PAL lighting is to enhance these difficult-to-image flaws so machine vision software can evaluate them and make a decision.

The biggest difference between PAL and other lighting methods is that PAL captures both shape and defects in a single image on surfaces that are typically difficult to illuminate. Printed directly on the surface of the light, PAL patterns are available on area and edge-lit lights. Printed patterns are not limited to just straight lines. Circles, squares, checkboard or even a zig-zag line pattern can be used to bring out hard-to-detect flaws.

Using a single camera and a light equipped with PAL, it is now possible to look for multiple types of flaws, such as paint peel, dents and scratches on a semi- or highly reflective object with a single exposure. Prior to PAL, this process would have required multiple lights, cameras and additional inspection time to solve these applications. 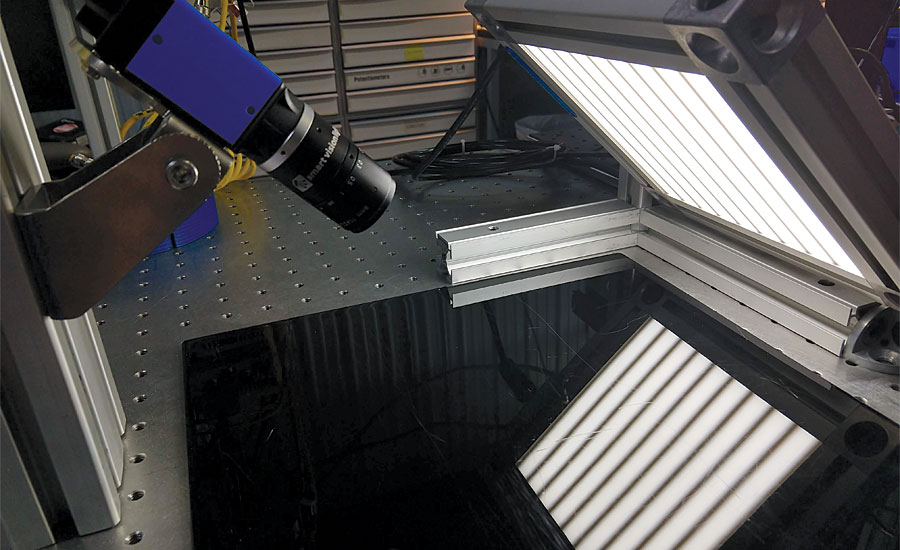 Figure 2: A PAL light with a pattern of parallel lines is oriented at 45 degrees to a black-gloss painted surface with the camera oriented to capture the image of the PAL off the painted surface.

Although PAL is a variant of a standard backlight (figure 1), the way it’s applied is much different than a standard backlit application. Unlike a standard backlight, PAL can be used to inspect partially to highly reflective objects such as painted surfaces and metal parts. The pattern from a PAL light is reflected off a surface and imaged by a camera, breaking the continuity of the surface to highlight defects that are difficult to see.

The contrast produced by the PAL results in the reflection of defects in contrast to the reflected background image. In addition to these high-contrast features, parallel lines or other geometries can be used to qualify and perhaps quantify the shape of a surface.

For the following demonstrations, PAL was used in two different ways: reflection mode and transmission mode. Figure 2 shows the PAL light setup in the reflection mode. When used in reflection mode, the PAL is oriented so a reflected light pattern and the object of interest can be imaged. Variations in the object’s surface will act to shift the pattern in the reflected image. Large defects, such as dents, are clearly visible as distortions to the original pattern. Smaller defects, such as digs and scratches, will show up as a high-contrast feature offset from the background pattern. 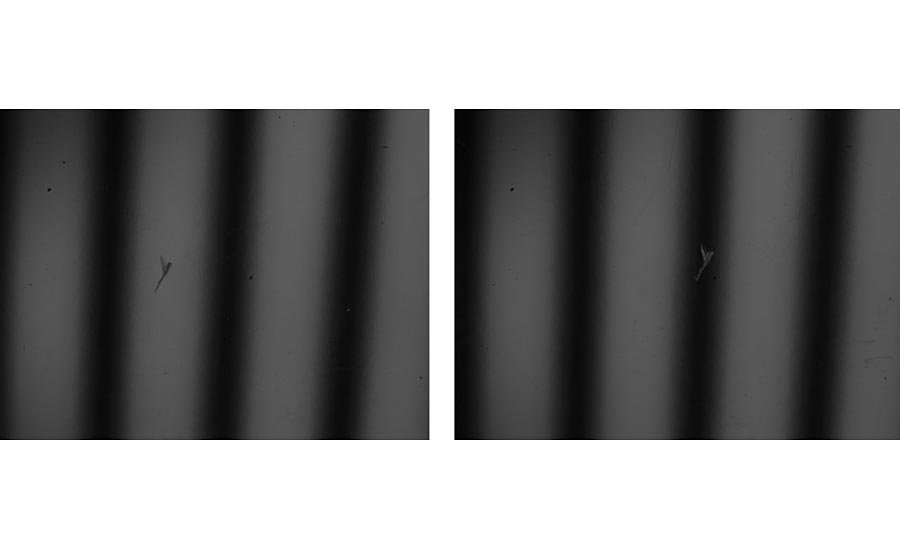 Figures 3 and 4: The two images captured from the setup in figure 2 are of the same defect but with the pattern shifted to show how defects appear in high contrast to both the dark and light lines in background pattern.

There are many types of patterns that can be used based on specific application requirements that will continue to evolve as this technique is applied in the field. In the following lab demonstrations, however, parallel line patterns were used. Here we look at how to use PAL as a reflection to find defects on a glossy surface. A PAL is placed at an angle to the surface so that the reflected pattern is captured by the camera. The camera lens is configured so that both the reflected pattern image and the painted surface are within the depth of field.

In figures 3 and 4, we’ve captured two images of the same area on the same high-gloss painted surface. The small pit in the paint clearly appears in high contrast to the background light. Two images were captured to demonstrate how defects can be visible in high contrast, whether it’s seen under a bright or a dark line. There are also light scratches in the paint that show up as a gray tone rather than the light and dark lines.

The next two examples (figures 5 and 6) use the same painted surface but show two different types of features: a deep scratch and stamped letters. Notice how the bottom edge of the scratch reflects the light, whereas the top edge of the scratch is dark. Image subtraction or processing techniques (not shown here) can be used to remove the background light pattern, leaving only the scratch. The lettering shows up from the background as the lines diverge around the bends in the stamped feature. 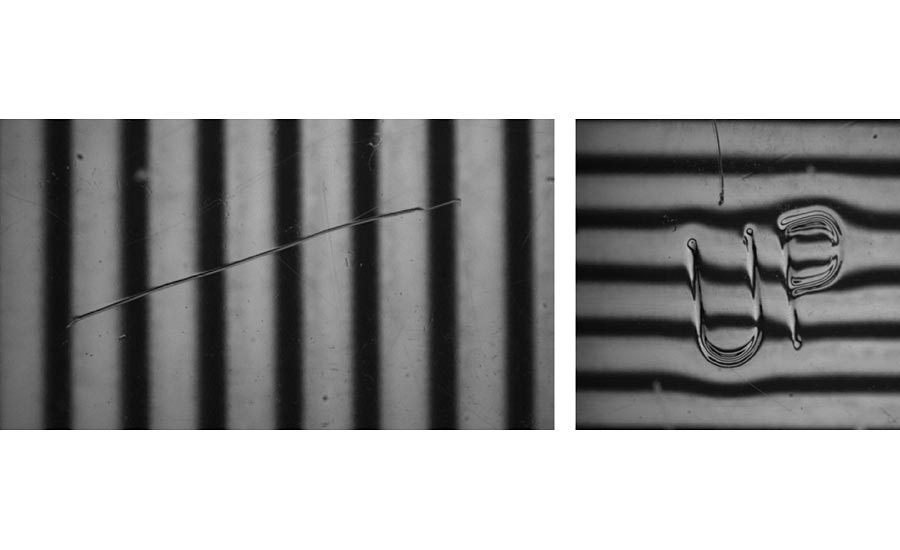 Figures 5 and 6: The images were captured from the setup seen in Figure 2. In Figure 5, a deep scratch can be seen and in Figure 6, stamped lettering shows up as a distortion to the reflected pattern.

As previously mentioned, patterns can be created based on the type of defect being inspected. For example, small surface deformations require the pattern size to be scaled to the size of the defect. Small dents or defects would benefit from a line width that is proportionate to the width of the dent or defect being inspected. Of course, the inverse should be applied for inspection of larger defects.

In the next example (figures 7-9), we inspect for small dents and bends in a sheet of rolled steel. The reflectance of the steel and grain pattern from the drawn processing show the difficulty in identifying defects in shape qualification in this material. 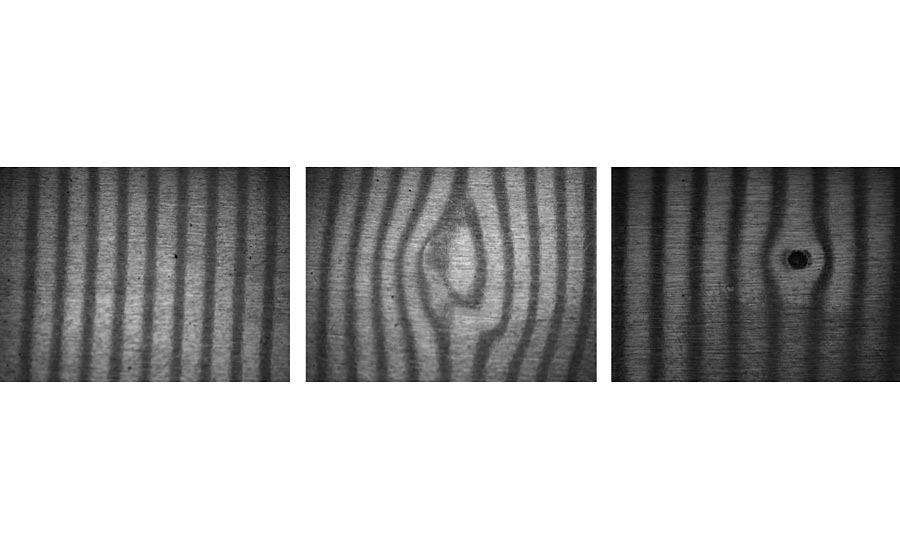 Figures 7-9: In figure 7, the surface does not appear to have any defects. In figure 8, a small dent was placed into the material. The relative brightness of reflected light would not reveal the dent, but with PAL, the defect is obvious. In figure 9, a small dent was placed on the surface with a sharp point, clearly showing how the lines diverge around the bend with the center of the dent showing up in high contrast to the background.

Transmitting Light on the Transparent

Another interesting application using PAL is the transmission or emission of light. When used as a transmission light source, PAL will act like a backlight but with the addition of high-contrast patterns that help find subtle variations and defects in transparent objects, such as a clear bottle. Transparent objects cause variations in the light path as the pattern refracts through the object, and small defects show up in high contrast to the background pattern.

In the following setup (figures 10-13), a clear glass bottle was placed between the PAL and the camera. The picture shows the PAL in the “off” state so that the camera would not be saturated by the light source. The resulting bottle images were captured with the light on. 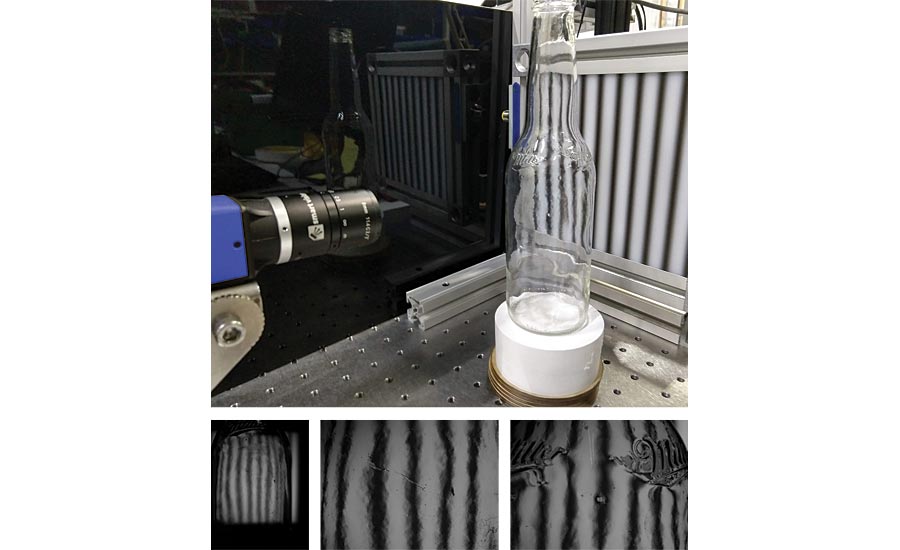 Figures 10-13: These images show the setup of PAL in transmission mode looking at a clear glass bottle. The resulting images demonstrate how small defects in the glass show up in high contrast to the background pattern.

With the PAL technique, defects in the bottle become obvious. A fold in the glass that was difficult to detect with the human eye under ambient lighting is now clearly detectable in the image. Similarly, bubble inclusions in the glass now show up as dark spots. A closer inspection of the image shows how irregularities exist in the bottle’s surface.

PAL lighting can increase the speed of inspection by allowing a camera to capture a larger surface area for inspection in a single exposure instead of capturing smaller areas with multiple images. Unlike other types of pattern lights on the market that require a set distance from an object and work by positioning a camera a set distance from a light and looking through the light, PAL can be used at different working distances and intensities. A PAL backlight can be placed underneath an object to look through transparent parts like glass, for example. The light can also be angled to allow a camera to capture the light’s reflection when looking for flaws on highly reflective objects, such as inspecting paint on a vehicle door mirror. Examples of PAL shown throughout this article were presented without any image post-processing.

By combining 2D and 3D qualitative methods into one image, PAL opens the door for imaging objects once thought difficult or impossible to do. V&S