The Mechanical Properties of Plastics

Mechanical properties describe the material’s reaction to an applied force, such as tension, compression, and impact.

Products and packaging undergo continual revision and improvement, with most companies constantly striving to use less material, simplify their manufacturing processes, and make their products more user friendly. An increasing number of organizations are also prioritizing environmental concerns, with plans in place to make their products and product lines recyclable. Since there are many types of recyclable plastics now available, it seems like using them as replacements for non-recyclable materials should be simple. Substituting one material for another, however, is often more complex than it seems.

Changing the material that a product is made out of may require a completely new manufacturing process or lead to the product not performing as expected. In one notable case, it took a toothpaste tube manufacturer five years to find the right design to replace their non-recyclable predecessor. High-density polyethylene (HDPE) is a great choice for a recyclable plastic, but is also rigid enough that using it for a toothpaste tube makes the tube difficult to squeeze. In order to solve this problem, the product designers needed to fully understand the properties of the different grades of HDPE in order to find the right combination that could effectively substitute for the non-recyclable material.

To make material properties transparent and accessible to their end users, plastics manufacturers generally provide data sheets describing the mechanical properties of the plastic being purchased. Mechanical properties describe the material’s reaction to an applied force, such as tension, compression, impact, etc. This article will focus on the properties associated with tensile forces, which are generally measured by placing a specimen of the material into a universal testing system and pulling it in tension until break.

There are several key measurements taken during a tensile test that help us determine a material’s mechanical properties. The force being applied to the specimen is measured by a load indicator, which is normally called a load cell or pressure transducer. Stress is calculated by dividing the force by the cross-sectional area of the specimen. This cross-sectional area is determined by the specimen geometry and measured by a dimensional device such as a micrometer. Lastly, strain is measured either by the movement of the testing system’s crosshead or by a strain device such as an extensometer compared to the initial length. The data points taken during a test are graphed on a stress-strain curve, where stress is represented as a function of strain. 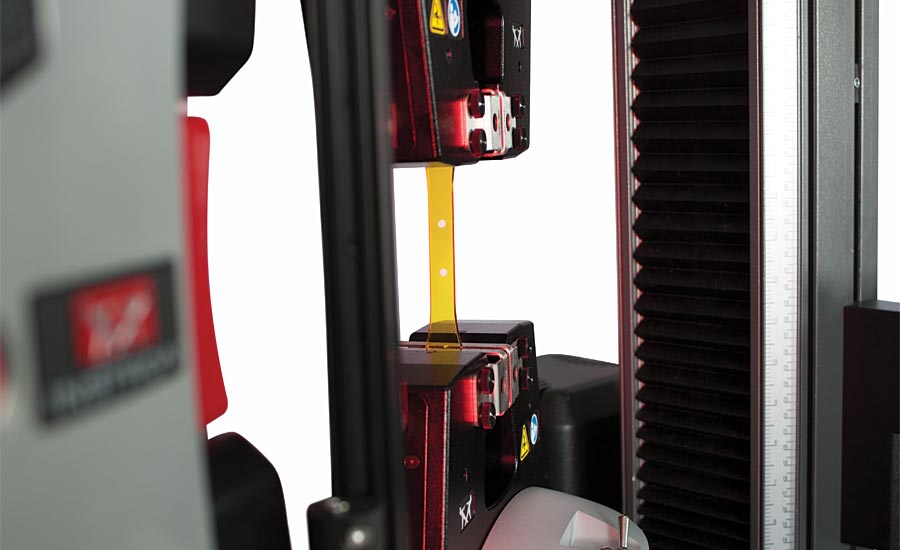 A plastic specimen is ready to be tested to find its mechanical properties. It is shown being clamped by a set of pneumatic grips within a material testing system. A video extensometer is ready to measure the strain between the two white dots.

To normalize test results and allow for comparison, many tests follow a standardized procedure, whether from an international standards board or supplied from a vendor or customer. These standards equalize the dimensions of the test specimen, specifications of the measurement devices, rate of testing, and means of data analysis so that results can be compared across laboratories.

The most common static mechanical properties measured during testing are ultimate tensile strength (UTS), elongation, modulus of elasticity, and yield. Mechanical testing also identifies the point at which a material stops behaving elastically (returning to its normal state after force is removed) and starts behaving plastically, where it remains permanently deformed even after force is removed.

Ultimate tensile strength is defined as the maximum stress a specimen endures during a test. For some plastics, UTS is clearly represented by a significant peak in the stress-strain curve. For others, the UTS is the stress recorded right before the specimen breaks. In materials that undergo strain hardening, there might be a peak, then relaxation, and then another increase in stress. Some testing standards deal with strain hardening differently in terms of UTS. Some international standards define the UTS as the first peak seen on the stress/strain curve, even if the specimen experiences higher stress later in the curve. In order to report tensile strength for a plastic, you need a testing machine equipped with a load cell or linear strain device. By inputting the specimen’s cross-sectional area before the test, the software will calculate the force readings into stress readings.

Elongation is defined as the amount that a material will stretch or deform when a stress is applied. It can be expressed as a unit of length or as a percentage. The calculation for the latter is % elongation = ΔL⁄Lo X 100 where L is the change in specimen length and Lo is the original specimen length. A plastic is considered brittle if it deforms minimally before breaking, and is considered ductile if it undergoes significant deformation before breaking. Ductile plastics go through a period called “necking,” which is a localized reduction in cross-sectional area and happens during the plastic region of a stress-strain curve. Testing standards determine which type of strain must be reported and will give the specification for the device being used to measure the change in length. 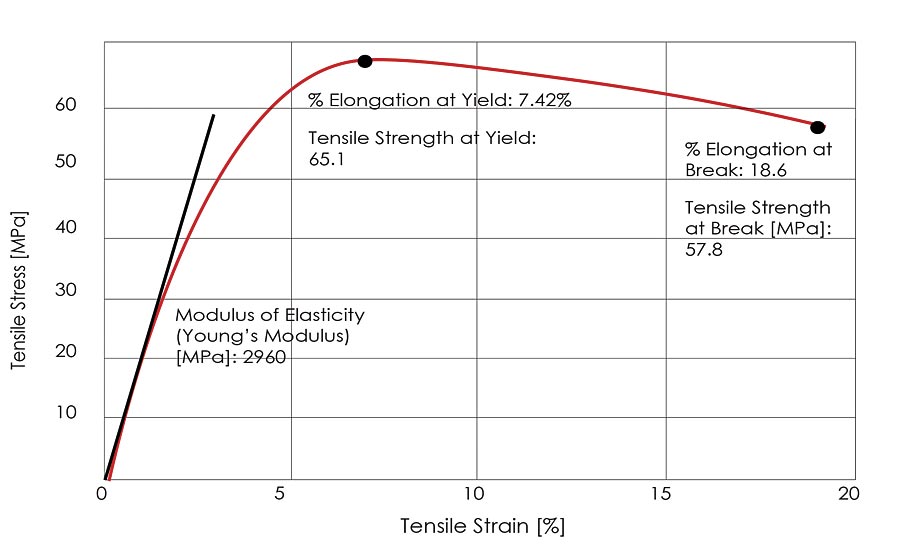 This stress-strain curve shows several important mechanical properties. In this example, the UTS is the same as tensile strength at yield.

Yield is the amount stress that a material can withstand without causing plastic deformation. For plastics, yield can be associated with the UTS and is then called tensile strength at yield. In the case of a material that undergoes strain hardening, the yield is found by locating the point on the stress-strain curve where the slope is zero, where strain increases without an increase in stress. This is called the yield point and may only occur for an instant before the stress increases. Many data sheets also supply a value for elongation at yield which is the elongation that is associated with the yield.

The mechanical properties of plastics can be dramatically altered by environmental conditions, and particularly by extreme temperatures. Some plastics may portray normally ductile behaviors, but when exposed to low temperatures may become brittle. It is important to understand the conditions that a product may endure to ensure that those conditions are replicated during testing.

In the case of the toothpaste tube, the original design was too rigid (high modulus of elasticity) which didn’t allow the user to comfortably or successfully squeeze toothpaste out of the tube. For subsequent designs, they needed something with a lower modulus of elasticity that wouldn’t drastically change the yield of the material, as they don’t want the tube to undergo plastic or permanent deformation. Their final design included many layers of thin plastic made up of different grades of HDPE, which allowed the tube to be easily squeezed and easily recycled. In this case, and in many other cases, testing and analyzing both the raw material and the finished product were critical to the success of the final design.