Peel testing in force measurement can be rather open-ended in terms of how the standard operating procedures (SOP) can be written. Examples of lengthwise testing may include something as common as tape reels to as uncommon as aircraft decals – yet the methods for testing one in comparison with the other can be mistaken for being functionally identical. Some standards, such as ASTM D3330, refer to multiple methods for testing similar samples, so the issue when designing an SOP for measuring force application becomes discerning what test method to utilize. Consideration must be given to the conditions that the materials will be exposed to, necessitating understanding of both the procedure setup and data analysis.

For a tape reel, using a universal testing machine (UTM) would likely involve the setup of the reel on a cylindrical support. This setup allows the reel to freely spin either by mounting to a bearing, or placement against a cylinder with a smaller outer diameter than the reel’s inner. The subtleties of these different setups can be readily apparent to a practiced eye. Peeling the tape from the reel on the bearing must account for the friction of the bearing’s rotation, while the cylindrical support is unmoving, creating frictional force against the reel. Running these two tests alongside may reveal different averages for overall force when compared to one another, and can differ depending on variable conditions - is the bearing or fixed cylinder lubricated? What is the diameter of the cylinder? Is the reel fixed on both sides or just one? How much deflection in the reel is created when force is applied to remove the tape? At what angle is the tape being pulled?

Minimizing variability is important for consistent testing procedures. Giving consideration to the idea of removing adhesive materials, there are multiple methods that could be used and one application is not necessarily applicable for another. Floor decals applied to concrete in warehouses might not warrant the same removal method of a decorative vinyl decal from one’s car. The former would require a bladed tool to remove the decal from the concrete, while the latter could be removed by hand. In fact, depending on the interest of the vehicle owner, using a sharpened-edge tool maybe suboptimal for avoiding cosmetic damage. As such, each adhesive material to be tested must be given consideration for the application, environment, and separation method.

Peeling At An Angle

For some tests, angle is significant. The direction of the tensile force will affect the detected levels of load application, making the peel more or less difficult if done manually. For example, consider the removal of painter’s tape along a length of wall against a doorjamb, mop guard, or ceiling. Pulling it at a consistent perpendicular angle to the surface would require the person removing the tape to travel as the point of peel separation moves along the length of the tape. This, in ideal application, will allow the painter to apply a constant force to the tape. But when the tape is removed without the painter following the strip’s travel, the angle of the peel becomes the arctangent of the distance the painter is from the wall, and how far the uprooted contact point travels. This requires more pulling force from the painter as the force is no longer normal to the wall, but rather is applied along the length of the tape.

Fixtures for emulating the painter moving with the tape exist –as the force is applied by the UTM, the plate slides, moving the surface the tape is adhered to. This ensures minimal variability in the angle of the test. Some plate fixtures can even be adjusted for angles, allowing for directional measurement of the load as it is applied to the adhesive material. 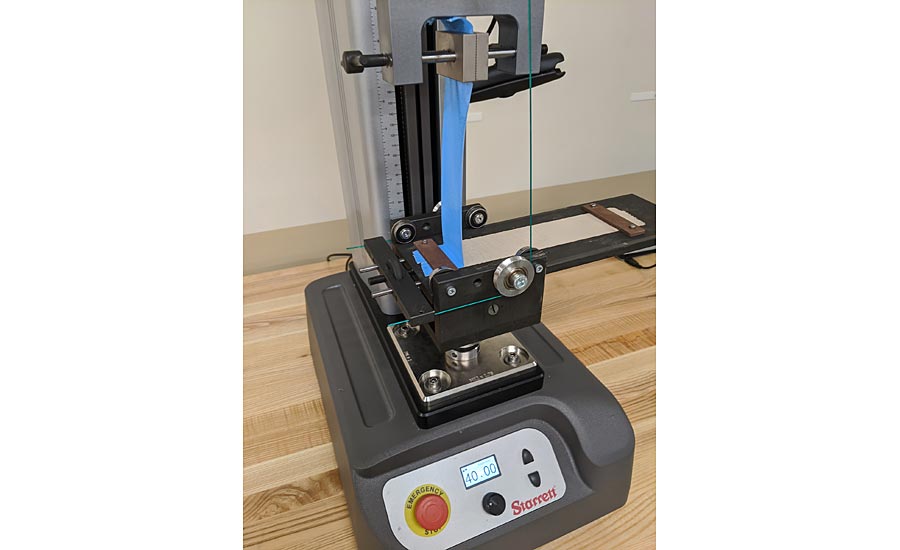 A 90° peel test being performed on a moving platform. The adhered surface is held in place on the platform while the tape strip is removed, and the motion of the crosshead on the UTM causes tension in the wires that moves the platform. Image courtesy of The L.S. Starrett Company

Another peel example is the painter pulling past the point of adhesive separation, applying a force parallel to the plane of adhesion along the length of the tape. Similar testing can be seen testing the stripping strength in ASTM D903, and through this method, the painter holding the end of the tape strip moves approximately twice the distance the point of separation does with each step. This method, known as the 180° peel, can be performed by affixing a length of adhesive material to a rigid surface such as a plank of wood or metal plate. The strip will be more than twice the length of the plate, allowing for half the strip to be adhered to the plate, folded back, and its end secured to the bottom fixture of the UTM, while the plate is secured to the top. While the crosshead pulls the plate upwards, the bottom fixture holds the tape, and pulls it parallel to the plate and adhesive strip.

ASTM Standard F88 is used to demonstrate the strength of seals. It refers to a series of fixture styles that can be used to hold free-floating seals for testing. A sample can be demonstrated by using a pair of hook-and-loop strips, with one end of one strip held in the bottom fixture, and the opposing end affixed to the upper. When pulled apart, the hooks separate from the loops, allowing the force required to separate the strips to be measured. But if allowed to remain unfixed, the length of the hook-and-loop strips will be left to freely change angle during the test, which can affect the results. This is referred to as a freehand peel, and be corrected by holding the combined hook-and-loop strip ends so that they are perpendicular to the separated ends, though there is some use to testing without interference. There are ASTM standards specifically for hook-and-loop materials, but some, such as ASTM standard D5169, are designed for testing other properties, such as the shear strength of the material rather than peel separation. The force application is different, which is why it is recommended to refer to a different standard for test setup and data collection when running a shear test for hook-and-loop as opposed to a peel test. For peel testing hook-and-loop, ASTM D5170 is an accepted standard.

An example of a freehand peel is the opening of a bag of potato chips. Often, the seam of the bag is pulled apart at a perpendicular angle by hand. Performed on a UTM, this would involve grip fixtures to separate a similar seam by holding the unconnected sides. Different fixtures, however, will yield different results. A fixed bottom jaw with a free-hanging rope or chain jaw would better emulate the inexact angling performed when a chip bag is opened by hand. This allows one end of the test to freely move around the other, resting at the optimum angle for testing without forcing perpendicularity.

Opening that same bag of chips is also a different circumstance in lengthwise peel testing. Rather than starting at the end, as you would normally do when removing the previous example of painter’s tape, the separation begins along the length, often at an approximate center. This form of peel testing can be used to test sealed containers, either the aforementioned bag of chips, or even bags with reusable interlock seals. Similar fixture options used for edge-based freehand peels could be used for the center-based freehand peel tests, though for ease of application, chain vise fixtures would be optimal.

The variety of peel tests based on material and directional forces produce a variety of SOP’s that provide different instructions to the point where one application could not be tested in the same manner as another. A bag of chips is not the same as painter’s tape, and pulling tape off a wall is not the same as removing it from the reel. Understanding the intricacies of individual force applications and knowing where and how one gets their results will ensure the proper design of testing procedures within a manufacturer’s expectations. While there is overlap in some examples, such as packing tape when compared to painter’s tape, those small details can make all the difference in determining setup and data collection. 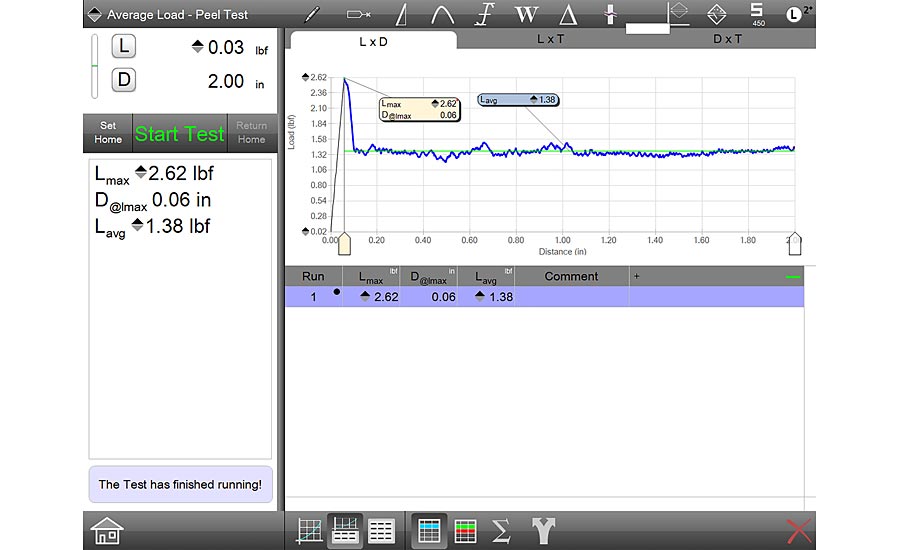 An example of peel test results. Advantages of using comprehensive software include being able to take average measurements of force application along the length of the peel – while excluding the peak tension that initiates the peel as necessary. Image courtesy of The L.S. Starrett Company.

CoaXPress 2.0 – The Standard in Industrial Image Processing for Demanding Applications