Uniaxial force testers have the advantage of performing both material tests and application demonstrations to ensure that quality products are made.

Force testing systems have a variety of applications in the medical field, where products often require testing in multiple facets of their design. This requires several standard operating procedures for force testing a single product, or facet of a product, and to ensure safety the design of these procedures must cover all aspects of the materials being used. From design to manufacture, a single medical product could have every component and its features tested for a variety of factors ranging from application, to its potential wear over time, and the integrity of its base material or materials in its composition. In the example of the syringe, from disposable varieties to laboratory equipment, force testing can be implemented from start to finish to determine both the properties of the materials in its manufacture and its usage in the field.

Typical injection syringes can be broken down into some basic components, even as base materials vary by design and intended application. The plunger length and the barrel itself can be composed of similar materials, often plastics for the disposable varieties. At other times, the barrel may be composed of glass, which allows for sterilization in heated chambers (autoclaves) enabling reuse under certain conditions. In either case, it is important to know the properties of the material composing the device, and force testers used in quality assurance systems can ensure that the materials are capable of supporting the usage of the device.

On the material end, the manufactured component for the barrel of a syringe must be capable of withstanding the application of the plunger, both for draw and injection. The barrel and its material must be able to tolerate forces being applied along its length, and along its sides, for safe usage. This kind of testing is not required to be performed post manufacturing of the syringe. Raw material samples can be tested prior to the device being made, saving time and supply by sampling from a batch of material rather than from finished products. For example, setting aside samples of post-production plastics and glasses that follow ASTM testing standards enable material manufacturers to test its quality.

Many disposable varieties of syringes are manufactured with seals on the plunger, composed primarily of rubber-type materials. These seals need to ensure an airtight lock to maximize the pull pressure for the plunger, without introducing air to the substance being drawn. Flexibility while maintaining sealed contact is also a requirement for rubber seals, particularly for medical applications where introducing air to the drawn substance will compromise the contents in the syringe. Testing the raw material of the seal will allow an analysis of its product lifespan. In particular, compression and relaxation tests to determine the rubber longevity while pressed against a cylindrical surface will give an idea as to how long the device can remain airtight and assembled, or intact while stored.

Other forms of syringes include perfect-fit syringes, which don’t have seals on the plungers. Rather, the design of these plungers is to snugly fit against the walls of the barrel on the device. An optimal material for this design is glass, enabling the device’s composition to be of one material type. The thermal resistance allows the entire device to be cleaned via autoclaves, as previously described, allowing for a reusable laboratory component. However, if the barrel and the plunger are composed of the same base material, it must be determined what forces would cause the device to fail, so impact and bending force testing using different forms of contact would be important tests to perform. Pointed contacts can test for direct impacts, while three-point bending tests can determine the stresses along the barrel prior to putting the material into production for syringe manufacturing.

Plastics can undergo similar material testing routines as glass when being inspected for their viability in production applications. Aside from knowing the maximum capacity for supporting forces from the sides, plastics are often subject to deformation due to forces being applied along its length. This could, while unlikely, be a result of compression force from usage of the plunger, either on the barrel or the plunger itself, if mishandled, or from storage. Once deformed, a syringe could lose its fit to the rubber stopper. Compression testing of samples sized appropriately will give insight into plastics yield strength, their ability to resist deformations and return to their original shape. 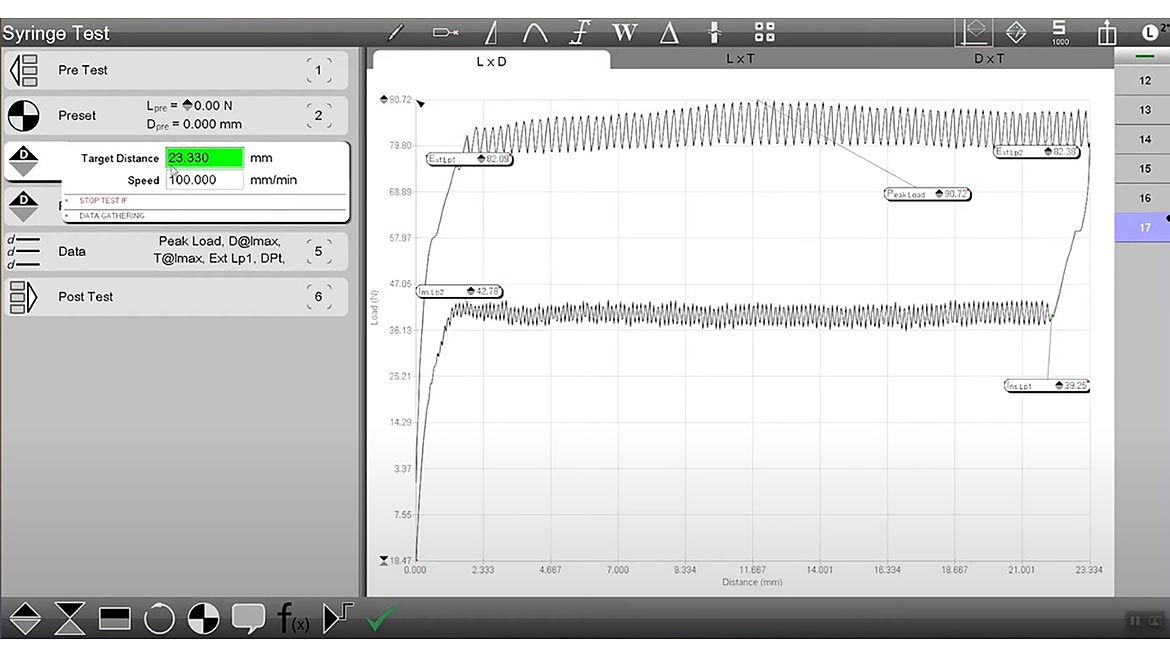 A sample test showing the draw and injection forces for a syringe. Source: The L.S. Starrett Company

Syringe needles are commonly a removable component of the syringe – easily attached to the barrel, and discarded once used, either individually, or with the unit as a whole in disposable varieties. The locks are composed primarily of plastics, while the needle shaft is made from medical-grade stainless steel. These needles need to be manufactured in a way to allow for ease of travel across their intended membranes. The stainless aspect prevents corrosion along the shaft, which would introduce drag forces for both initial piercing and long-travel insertions, but equally important is the design of the bevel for the needle point. The sharp end’s design is to minimize the required force to penetrate the skin. The more force required to inject someone with the syringe, the more uncomfortable it will be for the patient, and the more likely unintentional damage, such as bruising, will occur. For testing the material, metals can be checked for their bending resistance, much like plastics, to prevent bending along the shaft of the syringe, but post process testing will be more relevant to the application. 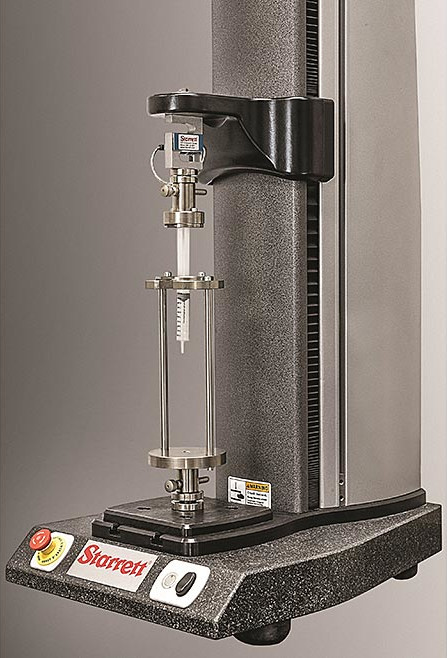 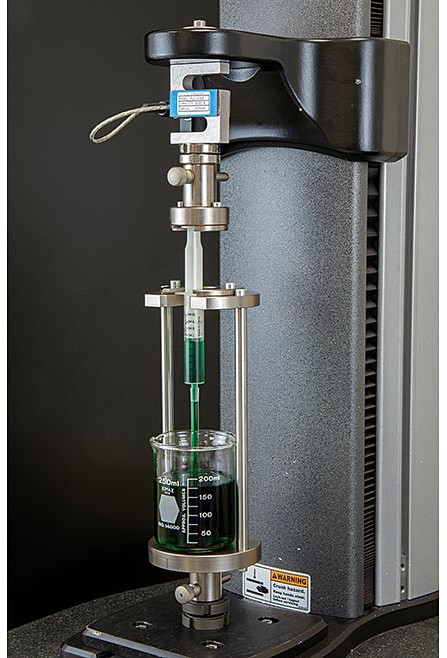 Starrett FMS Series test frame measuring the force to draw fluid in and out of a syringe. This application uses Starrett L2Plus software to capture peak and average load. Source: The L.S. Starrett Company 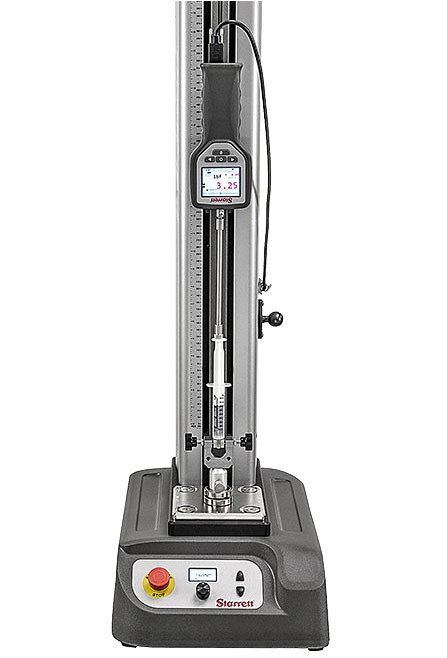 A compression-only style test, making use of a handheld force gage on a motorized FMM test stand. This tester is being used for measuring injection forces for empty syringes. Source: The L.S. Starrett Company

Once the syringe is manufactured, there are multiple aspects that can be tested in force applications to ensure the quality of the device. To begin, the needle can be tested with a proper mounting and membrane emulating the intended surface to be pierced, and with a uniaxial tester, an insertion and extraction load test can be performed. With the insertion, you will see the peak force required to penetrate the surface, and any notable distortions in the force as a result of drag as the needle travels downward. Once done, the force tester can reverse direction, tracking tensile loads rather than compression, making similar notes for any drag forces until the syringe needle is removed.

Additional testing can be performed with draw and injection forces. Properly affixed, the plunger from a syringe can be withdrawn from the barrel to draw liquid from a basin below the sample. Variable speeds can be checked to verify the draw amount and force generated. Drawing forces would be best demonstrated with pulling samples or doses from vials, or drawing blood from donors or patients. Reversing direction will provide the injection force, measured across the reversal of the draw. Important items to keep in mind while testing these applications are to make sure the same amount is drawn from the sample basin each time at different speeds and when testing speed, draw rate is important to ensure the plunger and stopper retain their seal.

While most syringes in direct usage for medical applications are disposable, there are other syringes in laboratory environments that are reusable. Previously described perfect fit syringes, primarily of glass composition, are capable of being used multiple times in their testing space. An important item to test then would be the longevity of the syringe, and the proper draw rate that ensures that the seal remains intact during usage, similar to testing the rubber stoppers. This will give the users an idea of the lifespan of their equipment, and inform them on how to handle the device without compromising their samples from improper usage.

Uniaxial force testers have the advantage of performing both material tests and application demonstrations to ensure that quality products are being made. While it is unlikely a single organization will perform each of the examples given here, there are opportunities to analyze the development of medical devices during each stage of their design and production. Starting from raw materials, to the final usage, even to possible events occurring in storage, many medical products could benefit from these kinds of tests to not only make sure they meet quality standards, but to also identify production issues and test new ideas in development.