From the Editor | Darryl Seland

Rube Goldberg: The Elaborate to Solve the Simple

His creations were ludicrous, committed to paper but often expressed as unachievable in any real way, not to mention that these machines took a long, drawn out approach to something that can be achieved by simple human motor skills. They remind me—and most likely inspired—the board game Mousetrap. One of Goldberg’s creation from 1931 is “Self-Operating Napkin.” 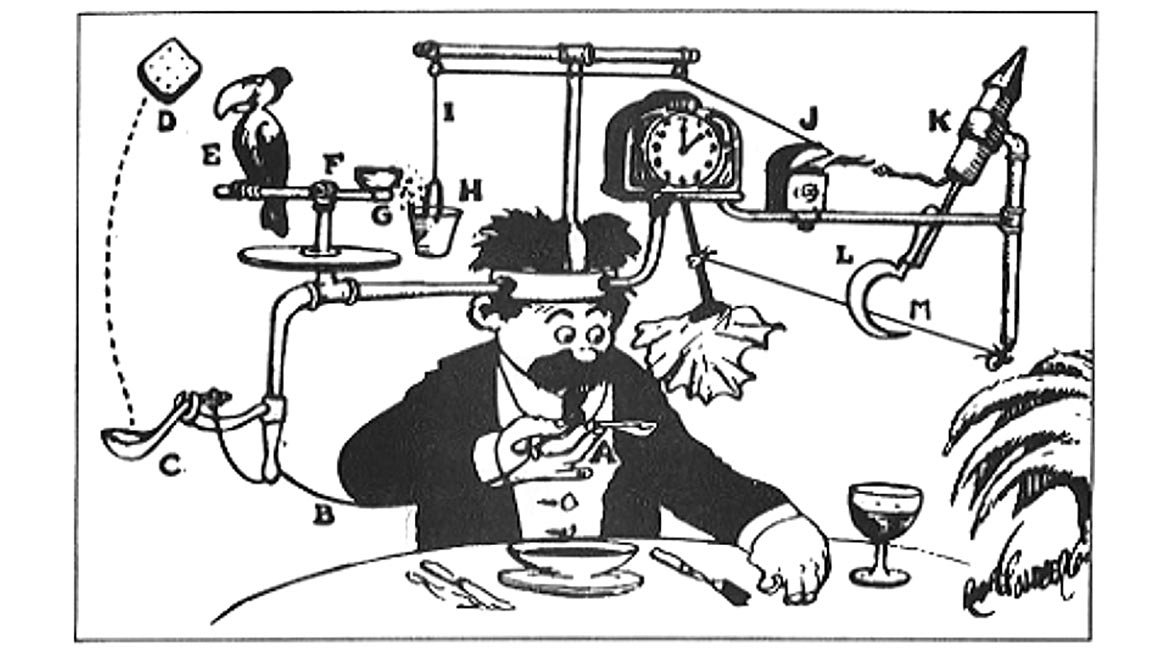 “I’m sure we all have those moments when technology feels like an absurdly elaborate Rube Goldberg machine.”

The cartoon shows Professor Butts with his new invention, the self-operating napkin. When the professor raises his soup spoon (A) to take a sip, it pulls a string (B) attached to a ladle (C) containing a cracker (D). The cracker is thrown up to a pet toucan (E) that jumps from its perch (F) to catch the cracker. The absence of the toucan’s weight on the perch causes it to tip the cup of seeds (G) on the opposite end into a pail (H). The new weight of the seeds in the pail pulls on a cord (I) that opens and ignites a lighter (J), setting off a rocket (K), causing a sickle (L) to cut a string (M) allowing a pendulum from a clock with a napkin attached to swing back and forth, wiping the professors mouth.

You might ask yourself, as many do with Rube Goldberg machines, why doesn’t the professor just wipe his mouth with a napkin in his free hand? You cannot accuse the professor himself of being lazy. He concocted the invention and would have to take the time and energy to build the self-operating napkin.

Goldberg was obviously being hyperbolic, possibly commenting on the proliferation of technology. I personally, after a long session of sifting through a seemingly endless amount of emails, long for the days of opening snail mail. I’m sure we all have those moments when technology feels like an absurdly elaborate Rube Goldberg machine.

The quality industry is no stranger to developing products that strike the proper balance between the simple and the complex. As author George Schuetz writes, “Combining the best of metrology and other industries creates products that are simple for the operator to use while also providing very complex measuring results.” It’s also a major tenet behind continuous improvement.

So, check out George’s article, “Handheld Gaging: It All Comes Down to the Touch”, our management article, “Why Continuous Improvement Matters” and everything else we have to offer in this month’s Quality.

Enjoy and thanks for reading!