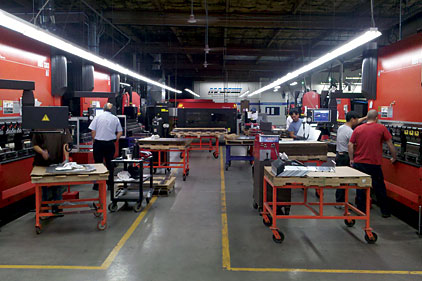 “MASS Precision has been in business for 28 years. For 23 years, we were in the sheet metal manufacturing and assembly business. In the last 5 years, we have increased our footprint into new areas such as automotive, medical, and military,” said Dan Heimann Quality Manager for MASS Precision. One example of the type of equipment they are now fabricating would be a guide for a gamma knife. These instruments are used to target and remove, on the cellular level, cancer cells, so precision in making this instrument is paramount. They also make precision equipment for the automotive and the military. MASS is one of a very few remaining stateside companies offering vertically integrated metal manufacturing skills from product design through prototyping, preproduction and full production runs, through testing, distribution and aftermarket kitting. Product manufacturing is the core service that MASS Precision, Inc. furnishes to a broad range of multinational OEMs in Silicon Valley.
“With 250,000 square feet and four buildings under roof, we do most of the production in house, with one exception. Due to state and local regulations, we use suppliers to perform the Zinc plating on our products. Because our customers require us to maintain a plating thickness of .0003 inches, we needed to develop close communications with our suppliers, we needed to validate they are delivering the products to the precise specification required, and we needed a mechanism to communicate to our suppliers before their products went out-of-control, thereby reducing scrap, rework, and lost productivity of our staff,” Heimann said.
“Because the quality of our products were on the line, we needed definitive measurements for judging the quality of the thickness of our suppliers’ plating,” said Heimann. “We found that measuring and analyzing the suppliers plating through the Synergy 2000 software to collect SPC data gave us a sound basis for evaluating each of our suppliers.”
Prior to using Synergy, MASS Precision was constantly sorting product, rejecting product, sending them back to their suppliers, they were frequently having material review board meetings, or they had suppliers sorting product at their facility. Once MASS got its suppliers on board, and they began capturing data about the thickness of their products, they had a starting point to make improvements over time. “Today, we have reduced defects related to plating thickness to nearly zero and reduced our customer rejects due to plating to less than 1 percent,” said Heimann.
“One thing we particularly like about implementing Synergy is the fact that we can communicate in real-time with our suppliers,” Heimann said. “This is vitally important for our business. We now have the ability to give a supplier a screen shot and tell them that their chemicals are trending towards going out-of-control and that they need to adjust the chemicals in their plating in real-time,” said Heimann. “Once we showed this capability to our suppliers, they became interested in implementing Synergy. The quality problems with plating thickness used to happen once a week, but since we implemented Synergy, it happens about once a month.”
“Supplier management and risk management for the medical industry are very important: it is imperative that you mitigate risk up front,” said Heimann. “Synergy ensures we make good parts and keep the cost of defects down. We found that the product paid for itself in 4 months.”
“Because we are saving our suppliers time and money by reducing rejected products, we have found that our suppliers have become our advocates in the SPC process,” said Heimann. “This has become a win-win situation for both parties. By implementing this process, we have been able to reduce our PPM from 50 to 10 inches.
Because of the proactive nature of their relationship with their suppliers, MASS can now rely on the quality of materials delivered by its suppliers. Instead of spending all their time auditing their suppliers, Dan and his team now has been able to pursue other aspects of their jobs.
Another area that MASS has implemented Synergy is in their metal fabrication facility. They now use Synergy to ensure that their sheet metal punch presses don’t drift out of tolerance over time. Using Synergy and an inspection template that measures location of the punched features, they can perform preventative maintenance on the machine and ensure the location of punched features and forms over time.
“Everywhere we’ve implemented Synergy has been successful,” said Heimann. “Now we are expanding our usage into other areas of the business.”
Zontec
(866)-955-0088
spcinfo@zontec-spc.com
www.zontec-spc.com
KEYWORDS: preventative maintenance sheet metal fabrication SPC data