Despite increased hiring, the need to fill the skills gap still persists

Industrial manufacturing forecasts are optimistic according to PwC’s Q3 2013 Manufacturing Barometer, which surveys U.S. based executives in large multinational industrial businesses. Industries are hiring in a myriad of quality sectors including aerospace, automotive, defense, energy, green manufacturing and technology. Despite the positive findings, 77% of the respondents cited the need to fill certain skills gaps over the next 12-24 months. Due to the continual advances in technology, the skills gap in science, technology, engineering and mathematic (STEM) fields are widening. Quality will look at what education, industry and government are doing to bridge these gaps and bring skilled workers to employers. 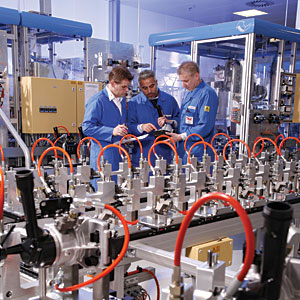 Are colleges and universities training enough engineers in quality related fields to meet the demand? “In a word, no,” said Jim Smith, a quality expert of 45 years formerly of Caterpillar Inc., “I still conduct advanced quality science training and find students, many with college degrees, are not conversant in the quality tools and techniques. They are also significantly lacking in strategy.”

Colleges and universities have given the students a strong foundation in their area of study but it was a company training program or an apprenticeship that gave the new hire the skills to do the job. As profit margins dictated business decisions, companies began eliminating these programs more than two decades ago. “In the 1990’s most companies dropped the training and apprentice programs and now they’re suffering for it,” said Smith.

Today, training programs are often financed by taxpayers through public schools or other publicly financed means. However, some employers are recognizing the importance of training and partnering with educational institutions.

“Employers are looking for specific talents,” said Louay M. Chamra, dean and professor of Engineering and Computer Science at Oakland University (OU) in Rochester, MI. This is challenging for the university because their programs cannot be so specific. “We cannot formulate our curriculum for one certain program,” said Chamra.

As a result, Chamra created and implemented a student engagement program as part of the Engineering and Computer Science curriculum to produce work-ready graduates. “This program is designed for employers who are interested in developing a pipeline of work-ready prospective employees who are able to make an immediate and substantive contribution to their company,” he said.

Due to the shortage of skilled engineers in metal forming, Chrysler Group LLC has partnered with OU in their work-ready metal forming program. Students in this program attend weekly workshops and frequent field trips that demonstrate the practical application of metal forming. Each summer until they graduate, every student in the program has a paid internship making about $15-$20 an hour. Upon graduating these students are ready to work and the company does not have to spend time training the new hire. “Employers are competing for these graduates,” said Chamra. “Many candidates receive several job offers."

This reaction is indicative of the findings of the Bayer Facts of Science Education survey. It polled recruiters at Fortune 1000 companies, 79% of those surveyed indicated competition is fierce for four year STEM graduates with engineering degrees.

Companies are clamoring to college campuses to find qualified workers. “We had more employers coming to the Engineering and Computer Science Employment Fair than we could accommodate,” said Chamra. “They were looking for about 700-800 openings just in engineering and computer science."

The metal forming program was a pilot program started three years ago at OU. “The feedback has been tremendous,” said Chamra. Now other companies, including U.S. Steel, have come to OU to implement a work ready program. The program costs the company around $150,000 per year. This can be divided among the companies who are interested in doing the same program. Other colleges and universities are looking at OU to implement a similar program at their institution.

Some attribute the skills gap to a lack of interest in STEM focused curriculum. “The perception is you have to be great in math and science to be an engineer," said Chamra. “Everybody can excel in engineering as long as you have the fundamentals in math, science, and chemistry.”

OU, as well as other academic institutions around the country and the globe, have implemented outreach programs to attract elementary, middle, and high school students to engineering. Underrepresented groups such as women and minorities are encouraged to consider this area of study. “Young women can excel in engineering and be the best in engineering," said Chamra.  “They should be proud to be smart and beautiful.”

Academics and industry are uniting to produce a powerful synergy globally. Schaeffler UK, an engine component plant in South Wales, has been attracting young people to engineering by supporting the Gwyr School in Gowerton, Swansea in the Engineering Education Scheme Wales (EESW). High school physics students throughout South Wales partner with industry to work together to solve an actual industrial problem. Gwyr has won the competition seven consecutive years.

Developing an interest in science and math at an early age helps build a strong foundation in these areas necessary to pursue the rigorous coursework in engineering or computer science. “The demand in engineering and computer science will remain for at least the next five-ten years,” said Chamra. The Bayer survey found 71% of the Fortune 1000 companies had a current work shortage of open, unfilled STEM jobs for four-year STEM graduates.

“We are not able to fill all of the jobs that we are creating,” Senior V.P. and General Counsel of Legal and Corporate Affairs at Microsoft Bradford Smith said. “With the national unemployment rate hovering just below 8%, that of the computer science and math occupations has fallen below 3.2% and in many states and sub-groups it is below 2%.”

According to The Bureau of Labor and Statics, this year the economy will create 120,000 new jobs that will require a Bachelor of Science in Computer Science. “We estimate that all of the colleges and universities in the country [U.S.] put together will produce this year only 51,474 of these degrees. That is why high skilled immigration and this legislation are of such great importance,” said Smith.

Smith, along with Ronil Hira, associate professor of Public Policy at Rochester Institute of Technology in Rochester, NY, and Neeraj Gupta, CEO and co-founder of Systems in Motion, are working to enact changes in immigration laws. The Border Security, Economic Opportunity, and Immigration Modernization Act, S.744, supports eliminating the green card cap per country. It would double the cost of the green cards paid by the employer, and raise the costs of some visas. The additional revenue would go into a national STEM Educational Fund to educate students in science, technology, engineering and math.

“We have systematically under invested as a country in our own children,” said Smith. There are 42,000 high schools in the U.S. and only 2,250 are certified to teach Advanced Placement Computer Science.

S.744 would raise the wage floor of H1B visas. It would also give U.S. workers a legitimate first opportunity for these jobs. Measures would be implemented to train and develop American workers with the requisite skills for these positions instead of replacing them with offshore workers.

“Through high skilled immigration we have the potential of attracting the best and the brightest from around the world and more importantly keeping them here [in the U.S],” said Hira. “But much of our policy effort is misguided.  It has been focused mostly on expanding guest workers programs rather than permanent immigration.”

Guest worker programs allow non-U.S. workers to live and work in the U.S. temporarily until their contract expires. These jobs are typically low-skilled and low-paying. “The majority of the H1B program is used to hire cheap indentured workers,” said Hira. “This is driven by the desire for lower cost workers not a race for specialized talent or a shortage of American talent.”

“An H1B worker can be paid 20-25 % less than U.S. workers,” said Hira. This is because Congress sets the wage floor with a prevailing wage. The prevailing wage is not the market wage. “It is the fiduciary duty of employers to lower their costs if it increases their profits for the owners, so it is no surprise that employers take advantage of the opportunity to hire workers at below-market wages,” said Hira.

According to Hira, an electrical engineer in College Station, Texas in an entry level position has an average starting salary of $61,000. They can pay the H1B worker $39,000.

The H1B visa is a temporary visa for non-U.S. workers to work in the United States. The visa is granted to the employer not the worker. If the employee resigns or is fired, they would have to apply for a new visa. “All of the top 10 H1B employers, last year, used the program principally to outsource American jobs to overseas location,” said Hira. “Outsourcing firms received the majority of the H1B visas issued last year.”

Many tout the H1B visa as a bridge to permanent immigration but the top H1B employers have no intention of ever applying for a green card for their employers.

“Accenture received 4,035 visas in 2012 and of those the company only applied for eight green cards,” Hira said in his testimony before Congress. “If this is a bridge to permanent immigration, it is not a very good one.”

Bridging the skills gap would take a collective effort from education, industry, and government. When these institutions join together, a powerful synergy is created that can close any void. Educating students in STEM curriculum early allows them to develop aptitude for more rigorous coursework. Students are industries future labor force. When corporations partner with academia to train and develop students, it has been shown to be a successful model for the company and the employee. Government has the power to enact laws to protect its citizens and require industry to pay the market wage to all its employees. These are some of the many ways in which the skills gap can be closed.

To post or seek employment opportunities in the quality industry, visit www.qualitymag.com/jobs

Measure Your Needs for the Proper Height Gage

What We Can Do About the Skills Gap

A Closer Look at the Skills Gap

The Non-Idiot's Guide to ISO 9001:2015: Understanding and Using the Quality Management System Standard to your benefit

The Hitchhiker's Guide to Lean: Lessons from the Road